On May 11, '97 the 'Regenmeister', Michael Schumacher, dominated the famous principality, taking a dominant win amid rain! 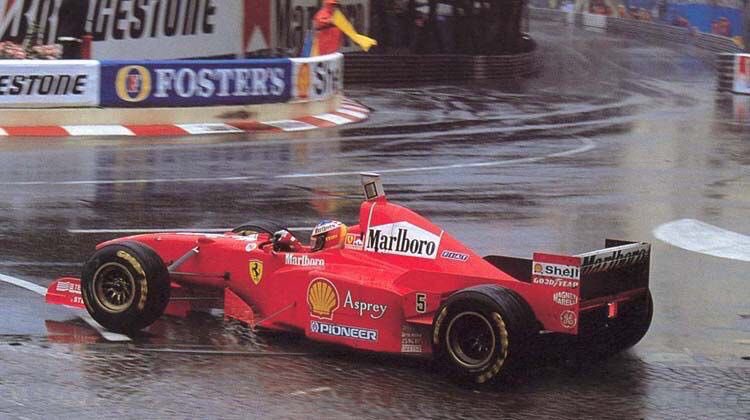 To race under normal conditions is fine. It’s normal. Happens all the time. If not filled with great racing, it lacks interest. But to race amid rains and tackle inclement weather becomes interesting. That’s the real challenge. And when done with precision and pure dominance, it becomes the stuff of legends.

In the modern era, where the likes of Hamilton and Bottas, Ricciardo and Vettel are looming large; a young Max Verstappen came out of nowhere and turned the 2016 Brazilian Grand Prix into a slugfest, which he excelled with pure determination.

Who can forget the dogfight at Sau Paulo, 2016?

It is considered an element of sublime, very much an antithesis in a season merely about Mercedes’ grand thumping of Ferrari. Verstappen proved the year was also about Red Bull when the dominant feature of the season was Mercedes and Nico Rosberg.

What could’ve so easily been a race about several race-retirements or car casualties became at the back of Max’ genius, a contest fueled by rip-roaring overtakes amid very limited traction.But Max’s dominance at Interlagos is a recent F1 story.

Decades before, the ‘Regenmeister’ unfurled pure class at the street circuit of Monaco, against conditions that were very opposite to racing.

Certainly, any contest featuring Michael Schumacher at his prime has always been fascinating- isn’t it? He brought to the late nineties and the 2000s what Senna and Prost did to the eighties. But the rains certainly extracted something special from the great German.

The unlikely circumstances at Monaco

He was yet to take the top step of the podium. While Coulthard won the season opener at Australia, Villeneuve clinched back to back wins at Brazil and Argentina with Frentzen winning the San Marino Grand Prix before the dramatic Monaco GP of 1997.

Arriving at Monaco, Michael Schumacher knew Jacques Villeneuve posed the biggest threat to his plans having won two of the previous four Grands Prix that year.

Schumacher knew, as did Ferrari, something drastic had to happen at Monaco, but what one didn’t expect was the rain. So what brought a hint of tension to the rest of the teams was perhaps a sign of opportunity for the rain-master Michael Schumacher.

But the bad news was, Michael Schumacher wasn’t on the pole, Williams’ Heinz-Herald Frenzten was, who managed to put his FW 19 just a tenth ahead of the German. Under normal circumstances, that’s a gettable void. But under rains, every inch counts in the favour of the driver who begins well.

Though the qualifying took place under normal conditions, drivers set their times on the softer compounds, which meant that lap times dropped by as much as two seconds.

Moreover, with the other Williams beginning from pole, this was the first time that Jacques Villeneuve wasn’t starting as the grid leader, which hitherto had been the case.

Rain began to fall right at the build-up to the 62-lap contest. This enforced hasty car set-up tweaks on the grid. While the Ferrari crew hurriedly rushed to fix the rear-wing of Michael’s car, Williams had their concerns exposed.

The FW19 chassis was highly pitch-sensitive and required major changes. Did this mean advantage, Ferrari?

Interestingly, before the 1997 Monaco Grand Prix, neither Williams nor Ferrari had won the contest in a decade. That’s a long dry spell- isn’t it?

In all, the race would also boil down to the strategy as it often does under unpredictable weather. While Williams and McLaren gambled on the slicks, Ferrari had other plans. It was Michael Schumacher himself who preferred opting for the 1996 specification’s Good Year tyres instead of the newer generation rubber.

It didn’t take Michael Schumacher long to prove he had punted the right move. Williams’ strategy soon proved disastrous as the scarlet red car was up in the lead within seconds of the lights turning green. Michael went past the flailing duo of Frentzen and Villeneuve making it look all easy. Interestingly, at the end of the opening lap, Schumacher opened up a big lead. Under any circumstances, a lead of over 6 seconds is considered healthy.

Well, these weren’t the easiest driving conditions as Michael Schumacher enjoyed a 6.6-second lead as the track leader. Four more laps later and Michael Schumacher had converted a healthy lead into a domineering one. On the completion of lap 5, there sat Michael Schumacher wearing admirably cool weather over his shoulders, having opened a 22-second gap to those in pursuit.

A win was already assured. A lack of traction didn’t seem to matter. The Regenmeister was in absolute control.

There was drama further back at the mid-field

Frentzen, who was already seeming tentative, lost his third to the other Jordan. A lap later, Rubens Barrichello had already split the Jordans. The Brazilian was now closing in on Giancarlo Fisichella, making most of the wet-weather grip of his Stewart-Ford.

Meanwhile, it was a disaster for McLaren.

David Coulthard, race-winner at San Marino a fortnight ago, spun around the chicane while his teammate, the famous Flying Finn Mika Hakkinen, in a bid to avert the collision with his teammate, went into the chicane.

Interestingly, their team’s call that the rainfall would last just half-an-hour was later fired, as it was revealed.

So two prominent cars were off the grid and hence, not any longer in the race. Meanwhile, there was a change of strategy from Williams, who, in a final rescuing act abandoned the slicks. Villeneuve pitted on Lap 3, while Frentzen pitted two laps later.

So utterly in control were he of the proceedings that had already put Jacques Villeneuve, the only real threat at the principality, a lap down.

But there were gains at the back-end of the grid. Mika Salo, the quicker driver all weekend was putting his Tyrell-Ford up in serious contention of points-finish. Having started fourteenth, he had already broken into the top-ten on the grid.

Meanwhile, owing to the treacherous conditions, Jean Alesi, in a bid to apply pressure in his Benetton-Renault, spun-off and went out of the context, while Berger collided with a barrier but persisted despite the sustained damage.

But in the context of the race, these were minuscule developments as the order of the competition was being dictated by the man so utterly dominant at the front: Michael Schumacher.

By mid-way, the track was beginning to dry out

This spelled some good news for the Bridgestone runners- Oliver Panis and Rubens Barrichello, placed then at second and third, respectively.

But fresh rainfall hit back and Michael Schumacher, who dived into the pits made the maximum usage of the Goodyears.

By Lap 40, all top three had pitted, included the German race-leader. At this time, though, Michael’s lead was well over a minute. Soon, it was going to be miserable for the Williams of Michael’s compatriot Frentzen, who hit the kerb too hard at the chicane, and as a result, collided with the barrier.

Race over for Villeneuve’s teammate.

A few laps later, on Lap 52, Barrichello, looking strong at second sensed a chance when Michael, went straight on at Sainte-Devote.

Fortunately, backed by real reflexes, Schumacher executed a spin-turn and kept going. It was now a matter of time before the call of glory.

Doing the formality, Schumacher eased off in the last few laps and then claimed the checkered flag dominating so effervescently a contest that was anything but child’s play. In so doing, he led every single lap of the contest at the fashionable principality.

Michael Schumacher would later go onto to win 4 more races that season, though the championship went to his then-rival Jacques Villeneuve.