3 ways Barcelona could line up with Memphis Depay

Lyon attacker Memphis Depay has been heavily linked with a move to Barcelona ever since Ronald Koeman took charge of the Catalan giants. 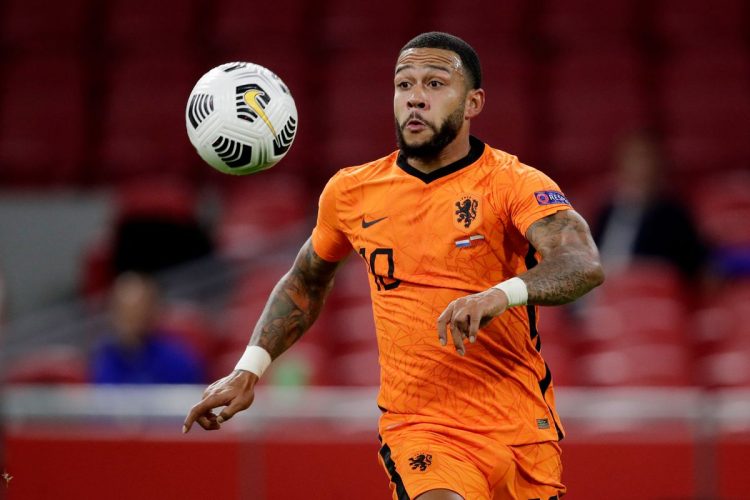 Lyon's Memphis Depay has been heavily linked with a move to Barcelona.(Image Credits: Twitter)

Lyon forward Memphis Depay has emerged as a top target for Barcelona since the appointment of Ronald Koeman at the managerial helm of the Catalan giants.

After a disappointing spell at Manchester United, Depay has managed to rebuild his reputation in France, with the Dutchman finding the back of the net on 15 occasions in only 22 games for Lyon last season.

As per multiple reports in both Spain and France, Barcelona have reportedly agreed on a £22m fee with Lyon for Memphis Depay, whom they believe to be a potential replacement for Luis Suarez.

On Sunday, Lyon president Jean Michel Aulas confirmed that Barcelona and AS Roma have shown interest in getting the service of the 26-year-old attacker, whose contract expires next summer.

However, when asked about his future at Lyon after Netherlands’ 1-0 defeat against Italy in the UEFA Nations League, Depay insisted that he does not know what will happen next.

“We just have to see what will happen. I’ll report to (Lyon) tomorrow and we’ll see what happens.”

With Memphis Depay seemingly inching closer to joining Barcelona, here are three ways in which the La Liga giants can line up with the Dutch international.

Blessed with breathtaking pace and close ball control, Memphis Depay could fill in the role of Luis Suarez in Barcelona’s attacking third.

With Lionel Messi and Antoine Griezmann/Ousmane Dembele on both flanks, Ronald Koeman could use the versatile forward in an out-and-out number nine role.

Besides his technical skills, Depay’s tactical intelligence helps him break defensive lines as he makes attacking runs into vacant spaces while playing on the shoulder of the last defender.

In fact, in the last few years, Barcelona have lacked pace going forward, with both Lionel Messi and Luis Suarez failing to make those darting runs.

With that being said, it still remains to be seen whether Koeman would use such a set up as it would mean Griezmann once again being pushed out to the left-hand side of the attacking third.

Although capable of playing anywhere in the attacking half, Memphis Depay is best suited in the left-wing role as he likes to cut inside and have a go at the goal or pick out his teammates, who are in more advanced positions.

So, Ronald Koeman could deploy his compatriot as an out-an-out left-winger, with Antoine Griezmann or Martin Braithwaite playing the main striker’s role up front.

This formation could also help Koeman to bring the best out of Philippe Coutinho, who can be played in his favoured number 10 position, occupying the hole just behind the main striker.

Another way Ronald Koeman could bring the best out of Memphis Depay is by deploying him as a lone striker in a 4-2-3-1 set up with Lionel Messi, Antoine Griezmann/Philippe Coutinho, Ousmane Dembele/Ansu Fati playing just behind the main target man.

With his explosive acceleration, agility, and ability to hold up play, Depay could bring all the other attacking options Barcelona have into play.

Depay, with his sudden change of pace and ability to beat the defenders in one-on-one situations, will provide Barcelona with some much-needed cutting edge going forward, something which they have lacked in recent times.

In addition, this formation will also provide Koeman the luxury of deploying his attacking options in their favoured positions as Coutinho, Griezmann, and Messi could all co-exist in the same line-up.

So, the 4-2-3-1 set up with Depay leading the line seems a tempting option for Koeman as it gives Barcelona something extra going forward.

Also Read: Will next season be Lionel Messi’s ‘Last Dance’ at Barcelona?