Abu Dhabi Grand Prix: Hamilton clinches pole. What can the other do?

The 2018 F1 season is coming to a close. The final battle for qualifying has also been concluded. Still, there’s time for one last showdown, even if it’s not the fight for the title.
Mercedes have nearly won everything this year. But they aren’t done yet. They are, once again, holding the fort, ready to run others down.
It’s that familiar figure at the front of the grid. It’s that man who’s so often stolen pole right in front of other powerful figures on the grid. Can the 2018 Abu Dhabi Grand Prix bring glory to Lewis Hamilton?
Well, there’s still a contest to be won, a battle to be contested, a few flying laps to be delivered.
It would be stupid to doubt the ability of a five-time world champion to win. But here’s what you have to consider. Hamilton’s last won a race at the desert emirate two years ago.

This year, Bottas begins from second. He’s followed by Vettel and Raikkonen as the Mercedes have locked out the front row.
The year before, even as Hamilton clinched the race, Rosberg stole the show and with it, also, the world championship. It was a fitting conclusion to a year that was all about Silver Arrows fighting among themselves. In the end, one of them won.
That told, 2018 Abu Dhabi Grand Prix would be about whether Lewis Hamilton can finish on another high. On the other hand, the race would be about who can actually stop a man who is on the charge, despite having clinched the world title. Can it be Vettel, will it be Max, somehow or will it once again be the laconic Finn of Ferrari?
Unfortunately, for others fighting Lewis Hamilton, there has been any corners he’s left open for the rest to barge in through.
Hamilton has clinched 10 poles coming to the season-ender. Now, his tally stands at 11. That’s worthy of some admiration, whether or not you are a Mercedes fan or someone who sides with Sebastian Vettel or Max Verstappen.

But here’s what matters

Continuing a dominant show on Friday where Mercedes were the fastest, Hamilton was the man to beat during the final qualifying run on Saturday.
He would eventually go fastest at a fantastic 1:35:693, bettering his 1:37:176 in the penultimate run.
So what did this bring about?
As Hamilton qualified on pole, he was followed closely by Bottas, who’d ensure a front-row lockout for the Silver Arrows.
Maranello’s Prancing Horse would follow the two Mercedes in locking out the second row.

But the question is what can the Iceman do at the start.


It’s not been the best of qualifyings for Raikkonen, who’s shown far better performances in the races that have gone by.
A P4 isn’t exactly a great place to gun for the podium right away, one is compelled to think. Moreover, there’s concern about Kimi being reprimanded for his pit-lane fiasco, his antics earning the wrath of FIA’s investigations.
Not the ideal way to begin your last race for Ferrari isn’t it?
We’ve seen Raikkonen demonstrate some thrilling opening lap manoeuvres this year.
At Austria, he executed a sandwich move jumping into the inside of the two Mercedes drives, managing to sandwich himself right at the start. At Silverstone, he came to blows with Hamilton for no fault of the Briton. He’d be left with a lot of overtaking and would eventually finish third, but not before making some moves on Ricciardo and later, Bottas.

In his last race for the Scuderia, fans will hope for a Red-Letter day

To be honest, now it doesn’t matter whether Vettel can bring that or not. There are separate psychological gains for both drivers.
Should Vettel find a way ahead of his teammate, of which there’s little doubt, since Seb’s often been the more agile of the two drivers, he’d be happy to end the year on a high.
On the other hand, Raikkonen, now set to participate in his final race for the Scuderia would love to kick up a storm at Abu Dhabi.
He’s proven himself at the USA. He’d love to bow out in style.
Moving to the other drivers, Daniel Ricciardo, who begins behind Raikkonen on fifth but qualifying ahead of his teammate, Verstappen, would wish to do something special.
The heart goes out to a man who’s clinched two wins this season and has also had to put up with a vain car that’s spoiled his season, marring it with 8 DNFs.
Another DNF here and Ricciardo might just be in shambles.
He’s among the few drivers whose victory means a lot to the entire fraternity.

All that told, spare a thought for McLaren’s Fernando Alonso 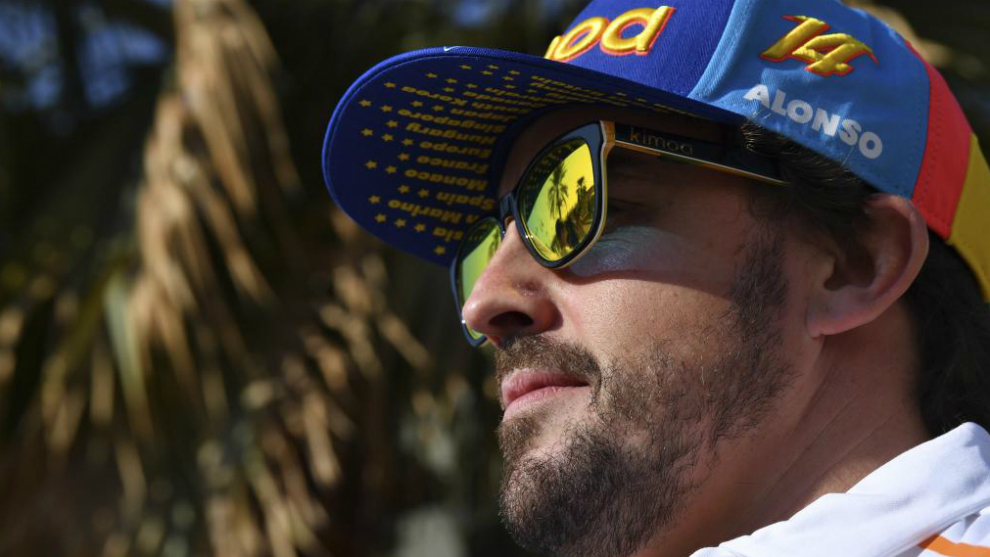 A man responsible for collecting 97 podiums, 32 wins and someone who’s won two not one but two world championships will be entering his final race.
As curtains are about to come down on what’s been a glorious career, thoughts go out to El Nino, a lion-hearted performer who’s found his teeth clattered having driven a car that’s been barely drivable.

What can the 2018 Abu Dhabi Grand Prix bring for Fernando?

Ever ready to fight and battle for points, even if, in the past few years, it’s meant fighting with the likes of the Renaults and Force Indias, Saubers and Williams, Fernando Alonso will be a key man to watch.
There you have it.
With the two Ferrari’s running in contention for strong points, albeit following Lewis, can the desert emirate bring up a thrilling conclusion to a season that’s been checkered with quite a few thrills?
For one last time this year, lights out and away we go!