Achraf Hakimi: Is choosing Inter the right move for the Moroccan?

While Achraf Hakimi is close to signing for Inter Milan, is it the right step at this point in his career? 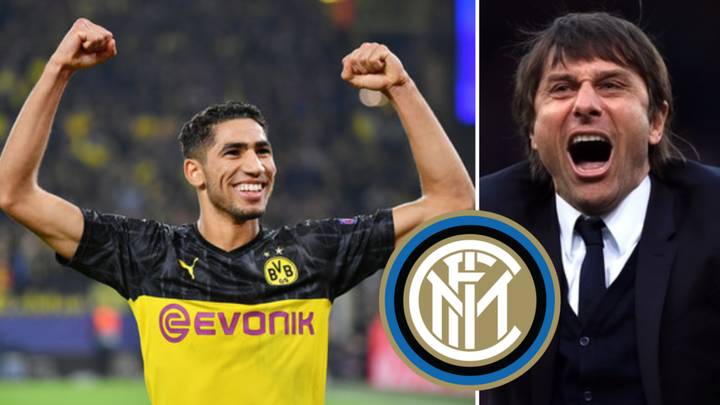 Real Madrid loanee Achraf Hakimi is reportedly closing in on a permanent move to Serie A giants Inter Milan.

The Moroccan full-back has been on loan with Borussia Dortmund for the past two seasons, and it seems he will be on his way to Italy soon.

As per reliable football transfer expert Fabrizio Romano, Hakimi is looking to leave Real Madrid in order to find regular playing time, which he won’t have been able to get at the Bernabeu due to the presence of Dani Carvajal.

The youngster’s stint with Dortmund will soon end, and while the Bundesliga side was eager to extend Hakimi’s stay for at least one more season, they have instead roped in former Paris Saint-Germain star Thomas Meunier.

As per reports, apart from the Black and Yellows, Bayern Munich, Manchester City, and Inter Milan were in the race to acquire the 21-year-old’s signature, and it seems he has chosen the San Siro as his next destination.

Achraf Hakimi closing in on a move to Inter Milan

The Moroccan international has developed into one of the most promising full-backs during his tenure with BVB, with the youngster adept at playing at right-back, left-back and on either wing.

Despite his obvious talent, Hakimi would have to fight it out for a place in the Real Madrid starting eleven with Dani Carvajal, and it has probably prompted him into looking for a permanent move away from the Spanish capital.

It has been reported that the youngster has already agreed on a five-year contract with Inter, and will cost the Serie A side in the region of €40m (£35.8m) plus add-ons.

Only a month ago, Achraf Hakimi’s agent had said that his client had his heart set on becoming a regular with Real Madrid. But after extended negotiations, both parties have come to the conclusion that a move to Inter Milan may help in his development further.

On paper, it looks like a marriage made in heaven between the two parties. Dani Carvajal still has a lot of experience, and, therefore, rather than becoming a second choice, a move away from the Bernabeu will help Achraf Hakimi improve further.

He is by no means, a finished article. At 21 there’s a huge scope of improvement, and judging by his stint with Dortmund, the player can still polish his defensive side of the game.

For that particular skill set, there isn’t a better coach than Inter manager Antonio Conte, who loves to play the same system wherein the Madrid-born player thrived under Lucien Favre.

Hakimi would also help Inter’s title challenge of next season, having started the season ever so well under a new manager, the Nerazzurri ran out of steam and are now 11 points behind Juventus, albeit with a game in hand.

Conte, therefore, is eager to bring some fresh legs to the Guiseppe Meazza, and the player in contention here fits the bill perfectly.

Achraf Hakimi is a dynamic full-back, who is full of running and capable of playing in multiple positions on the pitch. At Dortmund, his attacking side of the game has been there for all to see. He’s made 72 appearances for the Bundesliga giants, scoring 12 goals and setting up 17 more.

Under Antonio Conte, he would become a better player. The Italian tactician is well renowned for instilling discipline in his defenders, and maybe a few years down the line, Hakimi can actually return to Real Madrid as a much more complete player, and at 21, it certainly seems like the logical thing to do.