Albon was confirmed by Williams for 2022 , where he'll partner Latifi. He is currently a Test Driver with Red Bull! 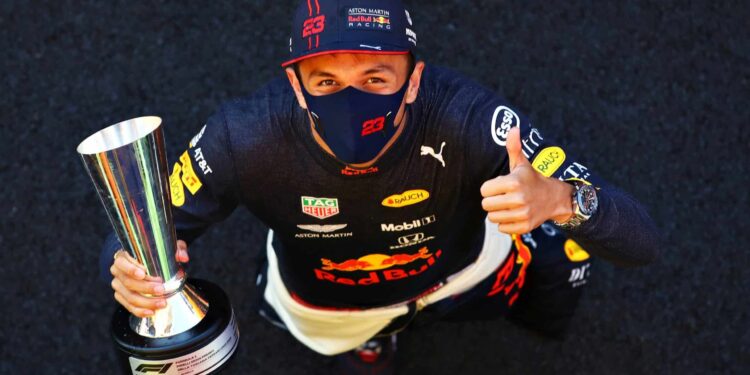 Most drivers will remember the action-packed Tuscan Grand Prix of 2020 for being a race that was red-flagged and for featuring on a starry Formula 1 calendar for the first time ever in all these decades, bringing the drivers and circus, in the process, to compete under the sparkling Tuscan sun.

After all, it’s quite difficult to ignore the Tuscan Grand Prix of the last year for what started out as a contest with twenty cars on the grid ended, eventually with just twelve vying for points.

Eight (8) had already, race-retired even before the 59-lap contest could reach the eighth lap. Though, what followed at the end of an immensely long and fighting test of nerves for the sport’s daunting heroes was a double podium finish for Mercedes, who hadn’t yet found Red Bull eating up its points as seen so repeatedly this year.

Although, there was one young and capable driver from that very team who emerged ahead of the ballsy Max Verstappen and took home a valiant third.

He would be the same driver that was sacked by the Milton Keynes outfit although the polished and smart Christian Horner can offer a completely vivid explanation to what eventually transpired in the Red Bull camp.

But here’s Alex Albon. Back again to where he actually belongs

Being a test and reserve driver with Red Bull, one who cut a bizarre figure whilst recreating the 2021 incident-marred Silverstone race, depicting Max and his exact nearabouts at Copse where the collision happened (with Hamilton) didn’t really cut a great sight.

Moreover, being such a talented young driver, one with a calm head and cool mind, one reckoned, there was always more to Alex Albon than filling the role of a TD.

It’s great then in some ways that Williams have taken the right call, as you’d think, in filling the seat left vacant by George Russell, now Mercedes-bound for 2022, by getting in a capable and fast driver.

All that the soft-spoken and mild-mannered Alex Albon, who only ever had two seasons before being fired, not to forget, fried at a team that often says absolutely Max-pro, is about going fast in a Formula 1 car.

That’s what he loved in 2020. That’s what he missed in the ongoing world championship, albeit that being the very thing he’d love to do come 2022, although with more caution and diligence for he’ll know one thing for sure by now.

And it’s that Formula 1 isn’t always kind to everyone!

In that the sport doesn’t always recall talents who’ve been done away with.

And while it makes less sense to incite a discussion or wax lyrical about an event that happened in the life of a fine young man at the conclusion of last year’s world championship, what certainly matters is to reflect on what ‘could’ happen with Alex Albon at Williams.

So how good a move is this anyway?

For starters, the Thai-British driver would love to team alongside a familiar figure in Nicholas Latifi, someone with whom he’d joined hands back in 2018, at DAMS in Formula 2.

So there’s this familiarity with the Canadian driver that would eradicate any nerves that Albon may have felt especially since it’s ever so common whilst making a return to the top flight of Formula 1.

But in here also lays an opportunity to excel and raise his game.

Firstly, the 25-year-old would be aware that he’s not going to be fighting in a McLaren, forget Mercedes starting next season. But that he’ll still have that very car with which George Russell, one of his noted contemporaries, claimed a second at Belgium (Spa, 2021) will- and should- motivate him to raise his game.

Moreover, it’s also the racing marquee with which his soon-to-be teammate Nicholas Latifi brought home his first-ever Grand Prix points, and that too, at the challenging and high-speed Hungaroring.

Albon will, therefore, realise that a backmarker that it may be, Williams, powered by a Mercedes will allow him to fight for points, at the very least, if podium finishes are out of question and could well be, since no one knows how might a certain outfit perform at the back of new regulations that are due to come into effect come 2022 season.

In all, it’s great to see a fighting force return to the grid, someone who has much more to offer the sport and build on aged just twenty five than what he could do at, say, 30+.

Meanwhile, here’s what Jos Capitos, CEO of Williams Racing had to say on the decision of hiring Alexander Albon:

Alex is one of the most exciting young talents in motorsport, yet comes with a large amount of F1 experience from his time at Red Bull. His multiple podium finishes highlight his speed as a driver, and we know he will immediately feel at home with the team at Grove.” 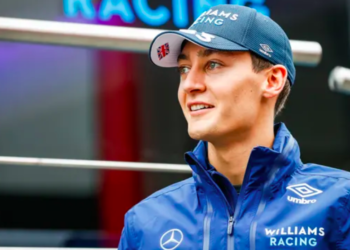