Is Alzarri Joseph a hope for a bright future for West Indies?

“World Cricket would be lovely with a strong West Indies team in it.”

Often urgent cricketing demands seem like implausible marketing campaigns to implement.
You have heard the above a million and a half times. It’s funny, to be honest simply for the reason that everybody craves for a strong West Indies team accept no one knows how is that going to happen.
So how are the West Indies going to be a strong unit? For starters, the answer seems to be in developing their youth. But let’s brainstorm a bit, shall we?
How is it that they can give fans so disgusted by their inconsistencies, a reason to cheer about?
If you have any suggestions, try not to restrict yourself by merely sending them to their cricket board, a system that’s undergone a restructuring of sorts in recent times as presented by an elaborate branding exercise underlined by what was once- West Indies Cricket Board- into being- Cricket Windies.
Try to share your ideas passionately with the cricketers themselves.
They need to be told how their performances are crucial to the fate of their team, the differences they can bring to a sport once considered a bastion of cricketing excellence in the Caribbean.
Over the course of the past few years, there seem to have emerged a few names that seem determined to answer the query everyone has, a query no less stranger than the sudden disappearance of MH 370: how will the West Indies become a great unit once again.
There’s Shai Hope. He reminded Virat Kohli’s team, among the best there is about his class and why it’s not all over yet for the Windies. There’s Roston Chase, whose timely Test century went as far as delaying the inevitable for his team; another Test match defeat.
Then there are Shimron Hetmyer and Keemo Paul. Then there’s Rovman Powell and a man who has, all of a sudden, declined a central contract for the next year, perhaps hinting at a larger cancer that’s still eating up the flesh and bones of Caribbean cricket. Evin Lewis choosing to play for T20s whilst declining national duties in the form of refusal to accept a contract proves that the lure of T20 is still greater than the need to contest for national duties.
But while there exist one batsman too many, regardless of the fact that a Hope, Chase, Hetmyer are at a stage in their respective careers, where painting them in adulation would make less sense in front of underlining areas that need immense improvement, there’s some hope left in the bowling department.
And while Devendra Bishoo’s recent performances do not make for a strong point, everybody knows the fast-bowling tearaway that Shanon Gabriel is.
He’s electric and on his day, a difficult campaigner to negotiate with.
West Indies fans are delighted with Kemar Roach returning to the side. Throughout the Caribbean summer, he was among the wickets. He played the ‘wrecker in chief’ of Bangladesh.
He was also a contributor of useful runs.
But is that all?
What about Alzarri Joseph?
There are things that are certain in cricket. For instance, a modestly impressive fast-bowler can be impressive and even dangerous should he work on his game and should he be born with a great height.
Luckily, Alzarri Joseph, miles away from the uncanny accuracy of a Curtly Ambrose or Andrew Flintoff has got both pace and a natural height that gives him an advantage over his opponents.
He’s nearly the same height as that of his contemporary from the West Indies: Miguel Cummins. On top of that, bowling regularly at around 138-140 and 140 plus doesn’t really seem out of his reach.

That said, what is it that could make Alzarri Joseph a star for West Indies?


Probably all that Joseph, 2.00 meter in height, can achieve rests in the fashion he made his Test debut.
Let’s rewind the clocks back to the series where a new star was born in the Caribbean in the form of Roston Chase. This was a time where Darren Bravo was still international cricketer who played for the West Indies, and a period where West Indies went as far as denying India a Test white-wash.
In the third Test of the four-match series, at Gros Islet, currently a strong venue for the Women’s World T20, India batted first and put up a score that you felt was a bit too much for the hosts: 353.
In so doing, Ashwin and Saha struck hundreds, instead of the usual mean known for contributing three figures: say a Virat, Pujara or Rahane.
When Dhawan nicked a fast one from Gabriel giving Dowrich catching practise, in walked a man who’s become a bully of the world’s bowlers.
But soon enough, instead of the scoreboard proceeding to a fifty or a hundred run stand which is what usually happens when Kohli takes charge, it went from being 1-9 to being 2-19 inside the 6th over.
Kohli got a scorcher that pitched around middle and off and found the outside edge of the bat with the ball safely collected by the slip.
The result?
A tall fast bowler with about the same experience as a first-time ballerina playing ice hockey amid world beaters dismissed the most dependable and prominent of Indian batsmen. He would go on and clean up Rohit Sharma for 9 and would find a way to disturb the concentration of Saha, the dainty keeper who managed to strike a fighting hundred.
With India dismissed for a first inning 353, a West Indian bowler exulted. Bowling the most number of overs after Roston Chase, 24, Alzarri Joseph gathered a memorable 3-for.
In the next inning, however, he’d go wicketless. What would hurt his case more would be the fact that his bowling partner, Miguel Cummins would take a six-for, his first fifer against India.
Yet, the Windies would lose.
Still, Kohli and his men could find some questions that their bats weren’t able to answer.

Cut to the present day and where’s Alzarri Joseph? 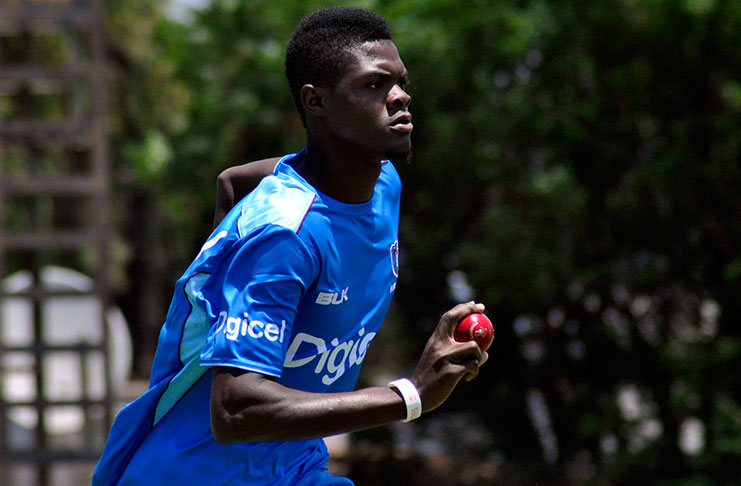 It’s been a year since the Antiguan played a Test. His last ODI came against Bangladesh and brought fine memories for his side. At the back of a splendid hundred by Hetmyer, surely a future captain that Joseph would love to play under, the fast bowler went at 9 an over.
What’s more?
This year, Alzarri Joseph hasn’t worn the Windies whites. Last year, he was able to take 10 wickets in Tests from 129 overs. But where ODIs stand, then in 2018, he’s taken a solitary wicket from 16 overs. He’s not even played 3 games.
But last year, he seemed in great form, taking 19 wickets including a five-for. Just when the lanky Antiguan was trying to come to terms with the rigours of international cricket, his bowling average a modestly impressive 30 (although, indicative of improvement from 2016), he was cut short by an injury.

He’s yet to fully recover.

Perhaps in Joseph, there’s comfort for Gabriel and Roach. They know they’ve got a capable change bowler who can even open an attack when either among them isn’t in form.
That said, there’s something his West Indies will need to ponder over.
Is there enough being done to guide Joseph?
The current cricketing set-up is a world of a difference from the bygone days of the 90s. For a newcomer like Bishop, there was guidance and constant council available in Ambrose and Walsh.
You could have your bad day and still miss out on being bashed in the papers for Ambrose and Walsh covered up for your mediocrity and failings.
To the likes of Vasbert Drakes and Fidel Edwards and even Corey Colleymore, there was Merv Dillon. Then there was Pedro Collins.
Alzarri Joseph is a product of changing times.
He inherits a bowling department that’s often stuck with the problem of taking quick wickets, where cricket is about survival in the West Indies, not just development or growth alone.
Does Joseph feel secure and happy in the environment he’s come to inhabit?
That’s a call the West Indies will have to take. Luckily, for Alzarri, someone whose skill brings a smile on Sir Viv’s face, there’s more than raw pace and a natural frame in the fray. There’s age. At 22, he’s just getting started. But, where will he finish?

Previous article#IndiaInAustralia: How much of a loss is Smith and Warner for the hosts?
Next articleCountry Over IPL: Has Cricket Australia Done The Right Thing?