Big sixes won't lead you where big fitness can or will! Is Andre Russell listening? 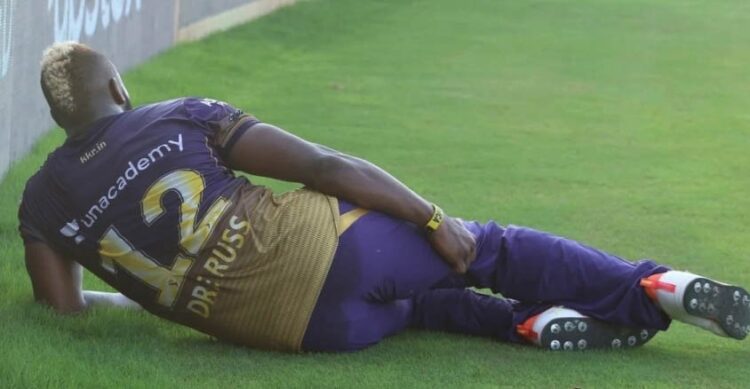 Big hits, big muscles and big bucks! Andre Russell has all of them.

What he doesn’t have, however, is a big level of fitness.

Not that the bloke doesn’t want to remain fit. Who’d not want to? But, the West Indian just keeps getting injured and quite frankly, that’s not leading him anywhere.

That Andre Russell picked up a hamstring injury just before the T20 World Cup, 2021 is an ominous piece of news for the West Indies. That he can recover well before the team’s first game, which is a fortnight away, is good news.

There’s time. He needs rest. But can he get it? KKR are table toppers of the current IPL season and would very much want their A-all rounder to get back in.

If he doesn’t, then it’s Shakib-al-Hasan’s chance to prove the world why he’s so highly rated and is, truth be told, a much safer bet than Russell where match fitness is concerned.

To add to Andre Russell’s worries, Gautam Gambhir has already declared there’s no place for him (Russell) in the playing eleven if he can’t bowl. He can bat. They all know. And can do well in both departments. But if he can’t bowl, then Shakib comes in is what Gambhir stated and didn’t even allude to.

It’s as clear as water in an ocean.

But that there’s no guarantee about how fit Andre Russell will actually be, whether he will be able to bowl with usual pace and gusto, for he’s an all-rounder, not just a bowler destructor, is not known.

And again, that’s not just for the IPL, but also for the T20 World Cup.

Though if you thought that’s the only worry with Andre Russell, then think again.

Thus far in the IPL 2021 season, Russell’s hit only a solitary fifty and compiled just 183 runs from nine outings with the bat. While his strike rate remains north of 150, it does point to a significant drop compared to being 184 in 2018 and then 2014 one season later.

Fielding-wise, Russell continues to push himself, is a safe catcher wherever you ask him to man the field and still dives and jumps about.

But what doesn’t help a heavy-built structure, which is no Cornwall but Pollard-like- are the vulnerabilities extolled upon the body.

Among the famed league of freelancing T20 cricketers from the West Indies who often travel the globe to partake in freewheeling T20 adventures, Russell’s been constantly on the move.

He featured in every single T20I versus the winning Proteas, during summers of 2021, after which he’d participate in every single T20I versus the visiting Australians. Not that scores of 1 (on two occasions, including fifth and final game) and twenty or twenty four were doing any good, but Russell came back and fired 51 off just twenty eight deliveries.

This was a breakthrough of sorts in that it would be the right-hander’s first T20 fifty in over a decade. That, to this day, the Jamaican’s only collected two fifties in a format where his skills have found true purpose is beyond imagination.

But, what we mustn’t forget is that Russell’s a bloke whose presence is enough as some state

Why he didn’t play the T20Is vs Sri Lanka, the very team he tormented a year and a half back ( in SL) is something not clear. With knocks of 35 off 14 and an unbeaten 40 off 14, Russell was the player of the series.

Can that Andre Russell return to the fore again and make his West Indies team proud?

We don’t know. What we do know is that injuries and Andre Russell have been old mates.

In the 2019 ODI World Cup, Russell picked up an injury post the game against England. Not that he was able to do anything spectacular contest. Just imagine where his team might have been had Russell not got injured again and played the important games against India and New Zealand?

How on earth did a powerful side like the Windies with Gayle, Lil’ Bravo, Brathwaite, Pooran, Hetmyer, Holder not play the semis should hurt the camp for a while, even to this day.

For where there’s no guilt of failure how can there be the fire for success?

This year, in June, Russell was stretchered away unfortunately in the month of June in a PSL contest against Islamabad United.

That was a scary sight.

Hope that sort of an injury never happens to anyone anywhere. World cricket lost Phil Hughes in an unbearable accident.

We don’t need any casualties anywhere on the earth in this beautiful game. A game that Russell brings a lot of firepower to and not to forget, great capacity to succeed.

But it’s also a game that needs a fitter Andre Dwayne Russell- the hitter of smashing hits, the remover of well-set batsmen and the attractor of one injury too many.

Moreover, at 33, Dre-Russ isn’t getting any younger. He still can, however, get fitter- can’t he?