In a first in the history of Indian tennis, the Indian team makes it to the play-offs of the Fed Cup, riding on a crucial win by Ankita Raina 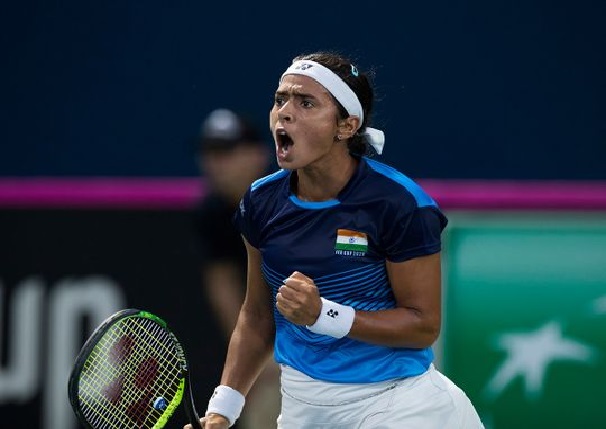 Ankita Raina’s two successive wins after losses in her previous two singles, helped India create history in the Fed Cup. In a first, India earned a place in the play-offs of the Fed Cup with Ankita Raina leading India to a 2-1 win over Indonesia.

In the tournament played in Dubai, India finished second in the six-nation Group that was topped by unbeaten China. The Indian team won four matches in a row after losing the opening tie to China.

The tournament was initially slated to be played in China but was postponed and shifted to Dubai. The Indian team for the tournament comprised Sania Mirza-who played the Fed cup after 4 years – along with Rutuja Bhonsale and Ankita Raina. Vishal Uppal, was the non-playing captain of the team.

In the opening match, Rutuja lost against the 16-year-old Indonesian, who is ranked 15th on the ITF junior circuit; their scoreline 3-6 6-0 3-6  shows the struggle Bhonsale had in the one hour and 43 minutes long match. Ankita won the next match, a crucial one in the context of the tournament, in straight sets against the talented Aldila Sutjiadi 6-3 6-3 and brought India back into reckoning.

The doubles were up next. Sania Mirza’s presence provided great support to Ankita and they won against Sutziyadi and Nugroho 7-6(4) 6-0 to seal India’s place in the Play-offs. While the first set was tight,  going into a tie-break, the Indian duo won the second set without dropping a single game.

Ankita, who hails from Pulwama, made her Fed Cup debut in 2013 and owing to her performances has managed to secure herself a place in the squad ever since. She has an overall win-loss record of 23-17 in the Fed Cup.

27-year-old Ankita Raina, despite her share of struggles, is India’s top-ranked woman in both singles and doubles. In April 2018, she first broke into the top 200 singles rankings and become only the Indian fifth player to achieve this feat. She is currently ranked 119, her personal best, yet far behind the fabled Sania Mirza, who reached a career-high singles ranking of 27.

Ankita draws her inspirations from the likes of compatriot Sania Mirza, besides Rafael Nadal, Roger Federer, and Serena Williams. And in a style that it is associated with her inspirations, she has made her name as one of the hardest hitters of the tennis ball.

Ankit’s Stupendous Run On The Court

Of late, the Indian tennis star has had a stupendous run on the court. In 2018, she bagged the bronze medal at the Asian Games, a feat only achieved by Sania Mirza. In 2019, she managed to participate in all the grand slams. With Ankita around, the Indian team can hope to perform well at the next stage of the Fed Cup too.

Had a great experience @usopen! Until next time.. ?? ?? ?? #usopentennis #ankitaraina_official

Early this year, she won the ITF Thailand 02A tournament with her Dutch partner Bibiane Schoof. A week earlier she had won the singles and doubles crown in Nonthaburi in the $25,000 ITF Thailand 01A tournament.

After Sania Mirza, the nation has had a hard time to find a female player with similar talent. But, Ankita with ever-improving performances and hard work, is a promising development for Women’s’ tennis in India. Looking at her success in 2019, we feel optimistic that she will continue the same in 2020 as well

In the play-offs, initially scheduled for 17 and 18 April but now postponed in the wake of Coronavirus pandemic, India will take on Latvia. Along with the play-offs the Fed Cup finals, which were to take place from April 14 to 19, have also been postponed.

International Tennis Federation (ITF) on 11th March said in a statement, “…it is with regret that the ITF has announced the postponement of the Fed Cup Finals, originally scheduled to take place from April 14-19 at the Laszlo Papp Sport Arena in Budapest.”

ITF President David Haggerty said, “New dates for the Finals and for the Play-offs will be announced in due course and will primarily be guided by the length of time that tennis as a whole is affected by COVID-19.”