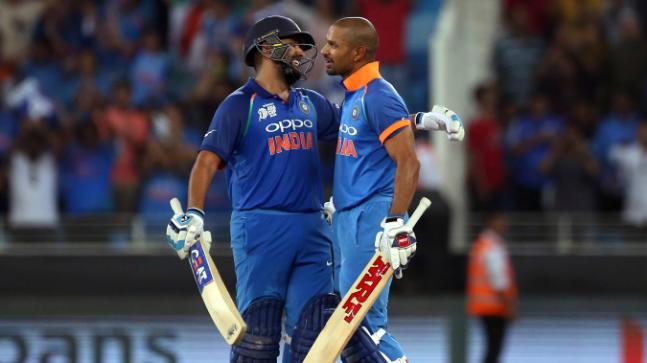 Rohit and Shikhar Dhawan have been phenomenal in providing India solid starts at the top (Image: India Today0

India completed the double over Pakistan to gain ascendancy in the ongoing Asia Cup 2018. After humbling Pakistan earlier in a Pool A encounter, the Indian team led by Rohit Sharma swept aside the former once again in the Super Four by a whopping nine wickets. Courtesy of this win, India booked a berth in the final of the Asia Cup.

Pakistan is still alive and so is the Bangladeshi unit, who now will be facing a do-or-die battle to reach the epic clash, India, on the other hand, will be up against Afghanistan for a dead rubber.

Openers Rohit and Shikhar Dhawan hit punishing centuries to steer an imperious India to a superb win over listless Pakistan in Dubai. Sharma notched a 119-ball 111 not out for his 19th one-day hundred while Dhawan made a 100-ball 114 for his 15th century as the pair put on 210 for the opening stand.

It was a match where Rohit and Dhawan smashed many records especially in the history of the tourney. Pakistan managed a paltry 237/7 and India chased down the target in 39.3 overs. Here we decode the talking points of the match.

Rohit, Dhawan excel on a night of records

The manner in which the duo set up the chase was pleasing to the eye. In this record run feast by the Indian side, the duo complimented each other right from the beginning. The pair got their 13th 100+ partnership in ODIs for India and are now only behind former legends Sourav Ganguly and Sachin Tendulkar (21).

The sensational pair have continued their run over the years and it looks like there isn’t anyone to stop them at the moment. Time after time they dish out special knocks and are so comfortable in their skins that everything else seems lost in the background. The duo has 3,846 runs as an opening pair in ODIs and this by far is no mean feat.

Rohit and Dhawan need to be cherished as players and their understanding of the game is so crucial. They never allowed the Pakistani bowlers to gain any rhythm and with both being on form, they know these are the moments to make it large. Dhawan has already smashed 2 tons in this tournament.

The left and right-hand combination shared a stunning 210-run opening stand, which is the duo’s best mark in ODIs. Their previous best was 178 versus Australia in Nagpur in 2013. What was interesting is that it was also India’s highest opening stand in the Asia Cup and the 2nd ever highest against Pakistan.

Calculative Rohit thriving as a finisher

The stand-in skipper has become a real superstar as a leader and that that has rubbed off on his batting. This was Rohit’s third successive 50+ score in the tournament. What he has done so well is to be the man in charge of the chases and it has become a routine to play long and strong.

Once again he was there to finish off the innings and see his side past the line. This is what one expects from a top order batsman, which is to keep batting till the end. Rohit was wise in his shot selection and yed at at his will, often allowing Dhawan to take the mantle off being aggressive.

Known as the ‘Hitman’, this innings from Sharma was so different and layered. He surpassed the 7,000-run mark in ODIs to achieve a special feat. The calculated innings still had 4 sixes and that saw him join MS Dhoni to be only the second Indian player to his 300 sixes in international cricket across all formats.

He took 181 innings to reach the milestone, which makes him the fifth fastest across the globe.

MS Dhoni a champion of DRS

Wrist-spinner Yuzvendra Chahal was bowling his first over of the match and straightaway he had an appeal for LBW against opener Imam-ul-haq. The umpire gave the decision in favour of the batsman, who had a huge stride forward and the bat was also awfully close to the pad.

The Indians appealed and once seeing the umpire’s decision, Dhoni quickly nodded to Rohit and India took a review. The decision was overturned as there were ‘three reds’ on the tracker with no inside edge. Imam took a long walk back.

This send many fans berserk on social media sites especially Twitter. What was astonishing is that ‘Dhoni Review System’ was the word that started trending. MS known for his excellency with the DRS, often is of massive help for the Indian team and this time too he was spot on.

Cricket is often a complete team effort and here sadly only one player stood tall. Shoaib Malik, who won the game for Pakistan against Afghanistan in their previous match, was once again superb after hitting a patient 90-ball 78.

India kept a check on Pakistan and runs scoring wasn’t easy. But Malik showed character and rotated the strike well. He and skipper Sarfraz Ahmed added 107 for the fourth wicket. Pakistan’s final over score depended on the senior player Malik, who interestingly fell in the 44th over. He was caught behind off a leg-side edge off Jasprit Bumrah.

Besides him, it was a shabby Pakistani show all evening. The batsmen didn’t show enough character to get a strong total and then the major issue for them was poor fielding. Pakistani fielders were lacklustre on the field and dropping an early catch of Rohit proved costly.

The bowlers too lacked the consistency and the inability to take wickets atop hurt Sarfraz’s side.