Zampa stars with the ball and Mitch Marsh strokes 39 off 36 to help the Aussies close the series on a high. 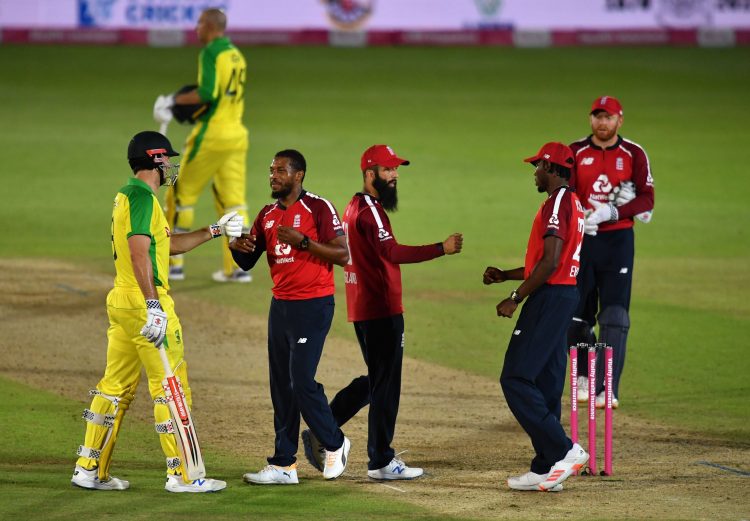 With the series already lost, the Aussies went into the third and final T20I with some of their wounded pride to salvage and that they did but not without hitting a few bumps along the way.

The Aussies made three changes to the side that went down rather tamely in the first two matches. They went in with the experienced Matthew Wade as the keeper-bat in place of Alex Carey, while tall New South Wales quick replaced Patrick Cummins who didn’t have fruitful outings with the ball in the first couple of games.

In the third change, all-rounder Mitchell Marsh came into the side in place of David Warner, who too, couldn’t light up the Ageas Bowl with the willow in his previous two outings.

England made just one change to their playing XI, as stylish right-hander Joe Denly replaced explosive keeper-bat Joss Buttler. Easily the form player for England with the willow, Buttler pulled out of the inconsequential final tie citing ‘personal reasons’. His unbeaten 77 off 54 put England on course to a series win in the last game.

The coin yet again flipped in favour of Australia captain Aaron Finch, who, this time, decided to put England into bat.

Unlike the last game, their bowlers came to the party as the opening duo of Josh Hazlewood and Mitchell Starc sent down tight spells, preventing the Englishmen from getting off to a flier. Young Tom Banton, who was restored to the opening position due to the absence of Buttler, couldn’t get going as he fell edging a Hazlewood delivery to Wade for 2.

Banton’s exit brought Dawid Malan to the crease and, along with Bairstow, he took England to 54 in the ninth over before the southpaw skied Zampa to the outfield only to see Marcus Stonis run in and pull off a stunning catch. It was a rare failure for the left-hander, who had been on a good run of form coming into the game. He fell 21 off 18 balls, with three hits to the fence.

The Aussies kept chipping away at the wickets as Sam Billings lobbed a catch to Finch off leg-spinner Adam Zampa for 4. It was another poor outing for the Kent right-hander, who is seen as a middle-order enforcer in the English batting line-up.

Bairstow, who had been struggling for form coming into the third T20I, looked to be finding the middle of his bat as he brought up his fifty, with 3 fours and 3 sixes. However, just when he looked to be striking form, the Yorkshireman fell for 55, offering a catch to slow left-armer Ashton Agar off his own bowling. A handy 23 off 21 balls from Moeen Ali and an unbeaten 29 off 19 from Denly helped England finish at 145 for the loss of 6 wickets.

In reply, the Aussies got off to a good start, posting 31 runs on the board in the fourth over before Wade, in trying to hit a Mark Wood delivery over mid-on, fell to a good catch by Chris Jordan. His quickfire 14 off 9 balls was laced with one boundary and a towering six off Joffra Archer.

Wade’s exit brought Stoinis to the crease, in another batting surprise by the Aussie think-tank. However, unlike the move to send Carey ahead of Steve Smith at No. 3 in the last game, which turned to be a blunder, the Stoinis gambit worked as the burly all-rounder struck 26 off 18 balls, with 5 boundaries. However, just when Finch and Stoinis threatened to take Australia to a facile win, the latter hit a Tom Curran delivery to Banton in the square leg boundary.

The fall of Stonis’s wicket triggered a mini-collapse as the Aussies lost Maxwell and Smith in quick succession. While Maxwell fell to a needless switch-hit that went awry, Smith was caught by leg-spinner Adil Rashid off his own bowling. Neither troubled the scorers much as Maxwell was sent back for 6 while Smith fell for 2. Rashid picked up both the wickets, bringing England back into the contest.

However, the sinewy Marsh brought his power-hitting into play as his 39 off 36 balls, with 2 boundaries and 1 six, brought the Aussies within touching distance of the target. Agar gave him good company with 16 off 13 deliveries.

With 1 to get off 4 balls, Marsh drove Jordan to mid-on and stole a quick single to take the Aussies to a win. It was a nervy end to a game which Australia, for a large part, had in its control.

While England took the series 2-1, the win in the final game will have given the Baggy Greens a world of confidence and a winning momentum going into the three-match ODI series, which starts at the Emirates Old Trafford on September 11.