Aussies collapse from cruise-control mode as England sneak a win

From 124/2, the Baggy Greens lose the plot and wickets to enable England take a 1-0 lead in the T20 series 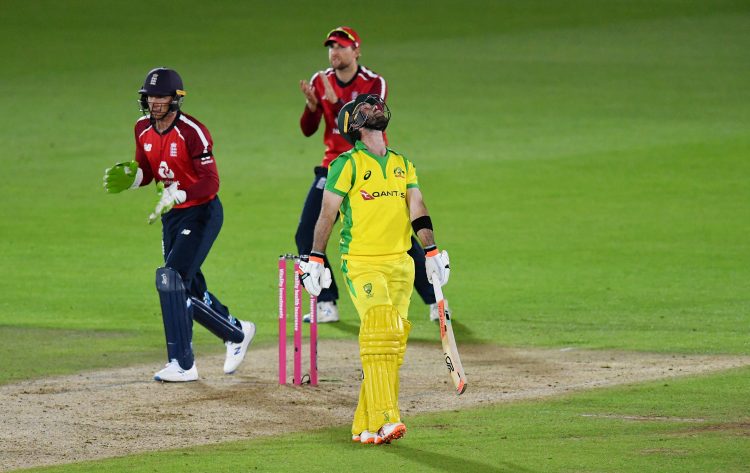 In all their years in international cricket, there have been many instances of Australia snatching victories from the jaws of defeat, with someone putting his hand up and turning it around quite spectacularly with either the bat or ball. Even with a seemingly impossible equation to achieve with the willow or only a few runs to defend in the last over, one wouldn’t dare bet against Australia to turn the odds in their favour. Seldom has the cricketing world seen the Baggy Greens choke in sight of victory like the way they did under lights in the Ageas Bowl on Friday.

But so it happened as the Aussies failed to close out a win from a position where they were literally cruising the chase. Set 163 to win, the Aussies had the game in the bag at 124/2 in the 15th over when a few late order blows put the skids on their chase. They eventually finished three runs shy off the target, gifting England a game they should have won and letting them open the three-match series with a 1-0 lead.

The hosts went in with some changes to their line-up, bringing back explosive keeper-bat Joss Buttler to open with Jonny Bairstow and injecting express pace into their bowling arsenal with the return of Jofra Archer and Mark Wood.

While Buttler got England off to a flier, Bairstow’s unflattering returns with the bat continued as he scratched around for seven balls before edging Cummins to Starc. Finch had brought the third man fielder up and positioned him next to the keeper. Cummins got one to bounce on Bairstow who couldn’t do much else than fend it off straight into the waiting hands of the fielder. He fell for 8.

Bairstow’s exit brought Dawid Malan to the crease and with Buttler going great guns at the other end, he could afford to take a few balls to get his eye in. While Malan was settling in, Buttler went after the bowlers and raced to 44 off 29 deliveries with 5 fours and 2 sixes. However, in trying to clear the field once too often, he fell, skying a catch to Cummins in the deep mid-wicket region off Agar.

With the onus on Malan to bat England to a competitive total, the southpaw played a watchful, yet attractive innings, going at more than a run-a-ball without taking any undue risks.

Some late-order hitting by all-rounder Chris Jordan helped England close their innings at 162/7. Malan finished unbeaten at 66 off 43 balls, with 5 fours and 3 sixes.

Set an eminently chaseable target, Australia started well with a fifty-run opening partnership. Warner and Finch seemed to be running away with the game, at 98 in the 12th over, when the latter holed out to Jordan off Archer for 46.

Smith joined Warner at the crease at the fall of Finch’s wicket and the two seemed to be putting the Baggy Greens firmly on course to victory. Warner, meanwhile, brought up his half-century. Though an uncharacteristically laboured knock, it was laced with 4 boundaries and his trademark grit.

However, just when things looked to be going well for the Aussies came a twist that neither the Baggy Greens nor millions worldwide, who had tuned into the game, could see coming. With the score at 124/1, Smith left for 18, caught on the boundary line by Bairstow off leg-spinner Adil Rashid.

The game turned England’s way from there on, as the Baggy Greens lost Maxwell, keeper-bat Alex Carey and Agar, who could be a handy striker of the ball lower down, in quick succession. Though the think-tank still had hope of Marcus Stoinis doing the finishing act, the big-hitting all-rounder couldn’t deliver the goods when it mattered. His innings of 23 off 18 balls had just one hit over the fence.

With 15 to get off the last five balls, Stoinis struck one over the fence bringing the equation down to 9 off 4. However, seamer Tom Curran held his nerve and brought his variations of pace into play to win it for England.

While Rashid was the standout bowler for England, with 2/29, Archer and Wood struck crucial blows to bring England back into the game.

While the Three Lions will take the winning momentum into the next game, Australia will have to quickly get over the disappointment of dropping a game that was theirs for the taking and come back strong.