Chasing 232, the Aussies were 144/3 before a mid-innnigs collapse saw them finish 24 short of the target. 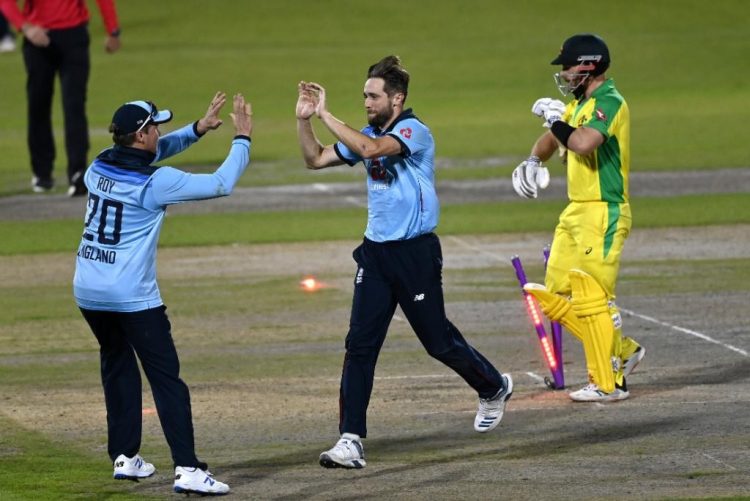 It’s rare for Australia to snatch defeat from the jaws of victory and even rarer for them to be doing it twice in a single tour. However, that’s precisely how it went down under lights in the second ODI at the Emirates Old Trafford.

With a modest 232 to get and the Aussies well on course at 144/3, one wouldn’t have dared bet on the Baggy Greens suffering a meltdown. However, so it panned out in the end, as, from a position of absolute strength, the Aussies imploded quite spectacularly to eventually fall 24 runs short of winning the match and the series.

While the Baggy Greens went with the same XI which opened the series with a win, England played Sussex all-rounder Sam Curran in place of tearaway Mark Wood.

England captain Eoin Morgan called it right at the toss, and, unlike the previous game, had no hesitation in making first use of the pitch. The Aussies went up in appeal in the opening over itself as opener Jason Roy fell over to a sharp in-coming delivery from Mitchell Starc.

As the on-field umpire lifted the dreaded finger, Roy referred it to the third umpire through the Decision Review System (DRS). Replays showed that the ball, while striking his pads in line with the stumps, would have comfortably gone over. It was a major reprieve for the opener, who fell cheaply in the first ODI, as the on-field decision was overturned.

However, his opening partner Jonny Bairstow wasn’t as lucky as he fell hanging his bat out to an away-going delivery from Starc. The ball took an edge off his bat and landed safely in the gloves of keeper Alex Carey. The Yorkshireman, who scored 84 in a lost cause in the first ODI, failed to open his account this time.

Test skipper Joe Root joined Roy in the middle at the fall of Bairstow and the pair took the score to 29 before a brilliant piece of fielding by Marcus Stoinis found the latter short of the crease. Cashing in on the earlier reprieve, Roy looked to have found the middle of his bat, striking 4 fours in a 22-ball 21 before he went for a suicidal single.

Root played a Starc delivery towards cover-point and called for a run. Roy responded but so did Stoinis as he ran in and, in one motion, threw down the stumps before the Surrey opener could get home.

At 29/2, the innings needed rebuilding and Root went about doing the same in the company of skipper Eoin Morgan. The pair put on a stand of 61 before Root fell edging a floater outside off by Adam Zampa to Finch at slip. It was a slow but purposeful 39 from the 29-year-old, laced with 4 fours and 1 six.

With the score at 117/4, Morgan, too, departed. Just when the skipper was looking to turn it on with the willow, the leg-spinner caught him plumb in front. He struck 5 boundaries in his 42 off 52 balls.

Sam Billings, who brought up his maiden ODI ton in the last match, and Sam Curran fell in quick succession as England slipped to 143/7. A timely 37 by Tom Curran, the elder of the siblings, and 26 by fellow all-rounder Chris Woakes saved England the blushes as the innings closed at a respectable 231/9. Leg-spinner Adil Rashid also chipped in with a quickfire 35 off 26 balls, capping off a late-order spark to take his team to a fighting total.

While Zampa was the pick of the Aussie bowlers with 3/36, Starc returned impressive figures of 2/38. Seamer Josh Hazlewood produced another metronomic spell of 1/27 off 10 overs.

Though eminently gettable, the English opening bowlers, especially Jofra Archer, made the target look a lot bigger than what it was as the Aussie innings was rocked early. Bowling at express speed, Archer got one to lift on Warner and all he could do was edge it to Buttler behind the wickets. It was another failure for the charismatic opener as he was sent packing for 6.

Stoinis came in at 3 and announced his intent by stepping out to Woakes and lifting a length ball over his head for a six. However, Archer soon reduced Australia to 37/2 as he got Stoinis to fend off an absolute snorter to Buttler. Rising steeply at searing pace, the ball was too good to go unrewarded.

The exit of Victorian all-rounder brought Marnus Labuschagne to the crease, and he raised a stand of 107 with the skipper to put the Aussie innings back on the rails. Labuschagne scored 48 off 59 balls, with three hits to the fence, before he missed a straight one from Woakes to be caught plumb in front.

That was the beginning of the Aussie collapse as Finch, Marsh and Glenn Maxwell were sent back within 3 runs off each other and the momentum turned England’s way. Finch, who was anchoring the chase with 73 off 105 balls, fell dragging Woakes onto his stumps.

With the innings in disarray at 147/6, out stepped Cummins to join Carey at the crease. However, the quick, who can strike meaty blows lower down, fell to Sam Curran off 11. Coming round the wicket, the left-armer bowled short outside off and Cummins went for a pull only to see the inside edge crash onto his stumps.

Though Carey tried to put up a fight with 36 off 41, the tail didn’t wag as the Aussies were skittled out for 207. Hazlewood, the last man, was unbeaten on 7.

With the series all square, England will have all the momentum going into the series decider on September 16, Wednesday.