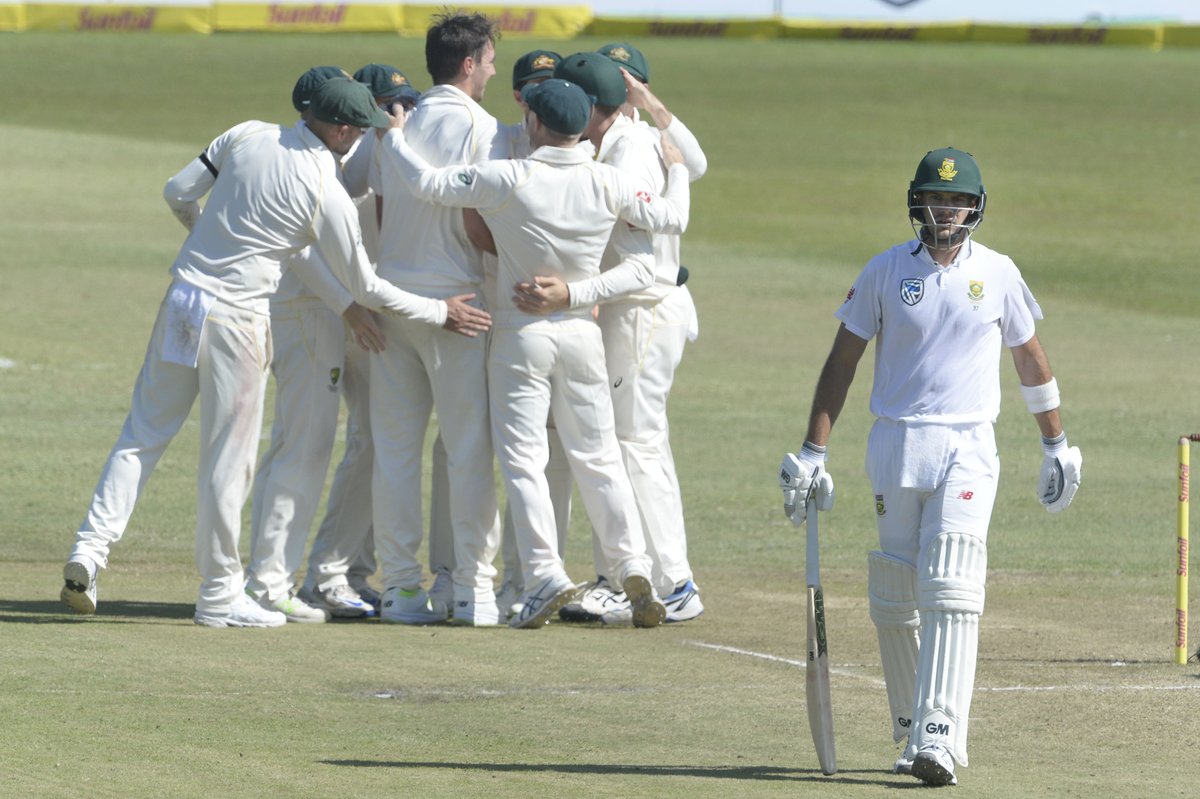 It was a natural calamity of sorts for South Africa and their batting that has been largely out of form. Australia pounced on to the hosts after decimating them for a paltry 162 on Day Two of the first Test match at the Kingsmead in Durban.

Steve Smith’s side will be ecstatic after snatching the momentum away from the hosts since close of Day One. Resuming at 225/5, the visitors surged ahead after an excellent 96 runs from Mitchell Marsh, who looked like the man that carried his bat from the Ashes to the rainbow nation. Aussies folded at 351 in their first innings as Proteas spinner Keshav Maharaj claimed his maiden five-fer.

Thanks to 5/34 from Mitchell Starc, South Africa have been bowled out for 162 and at the close of play on day two they trail by 189 runs. #SAvAUS

In reply, the hosts were in tatters with only AB de Villiers providing a stern reply with a well made 71 not out. In the end the star player ran out of partners as Mitchell Starc (5/34) was on top of his trades. The left-arm fast bowler, who finished as the highest wicket-taker in the Ashes 2017-18, was the chief architect for the Aussies besides Nathan Lyon (3/50), to hurt Faf du Plessis’ men.

Australia have gained a valuable 189-run lead at stumps on Day Two and from here on it will be a mountain to climb for the hosts, whose batting has been in disarray even in the home Test series win against India in January.

The Proteas got off to a decent start after Aiden Markram got the better of Starc in the opening overs with a flurry of boundaries. The hosts rallied to 27/0 in seven overs before Nathan Lyon, who was brought early on to the attack, got Dean Elgar caught and bowled for seven runs. Two deliveries later, Lyon had Hashim Amla as well, who inside edged a turning delivery on to his pads to offer a catch at forward short-leg.

Markram continued to play his shots and with AB de Villiers in the duo looked to get the hosts out of danger. But once again Australia struck after Pat Cummins got Markram fending at a short ball. At 55/3, Proteas were in trouble. Skipper Du Plessis came in and looked positive from the start, but Starc had his first of the day getting the former nicking a delivery to Tim Paine.

The ploy of getting Theunis de Bruyn as an extra batsman did not work as he fell cheaply for six runs, with Starc getting his second victim. AB and Quinton de Kock got together for a 42-run stand and there was hope. AB looked classy hitting boundaries and got to a fifty.

De Kock too looked to attack, but Lyon foxed the latter and had him bowled. At 150/6, the Proteas sank deeply down the barrel. AB was left stranding, as Starc did the clean up with the next four Proteas wickets falling for just 12 runs.

Marsh gets Aussies to a decent score

Earlier, Mitchell Marsh brought up another classy knock to defy the Proteas with a stellar 96. Starc too played a cameo with a breezy 35-run knock. In the start of the day, Tim Paine and Pat Cummins were dismissed quickly in an hour, things looked really bleak for the visitors.

But as has been the case majority of the times, the lower order bailed them out, adding a crucial 100 runs for the last three wickets, with the score going past 350. Marsh and Starc shared a 49-run stand after the visitors were reeling at 251/7. Starc was the chief contributor smashing Morne Morkel at will. Marsh on the other hand batted sensibly and continued to march on steadily.

Another 41 runs were added with Nathan Lyon (12) which broke the Proteas hearts. Marsh’s innings was comprised of 13 fours and a six. He attacked the hosts in the end of his innings and made sure the Aussies got to a decent first innings total. Keshav Maharaj finished with 5/123, was the pick of the South African bowlers.