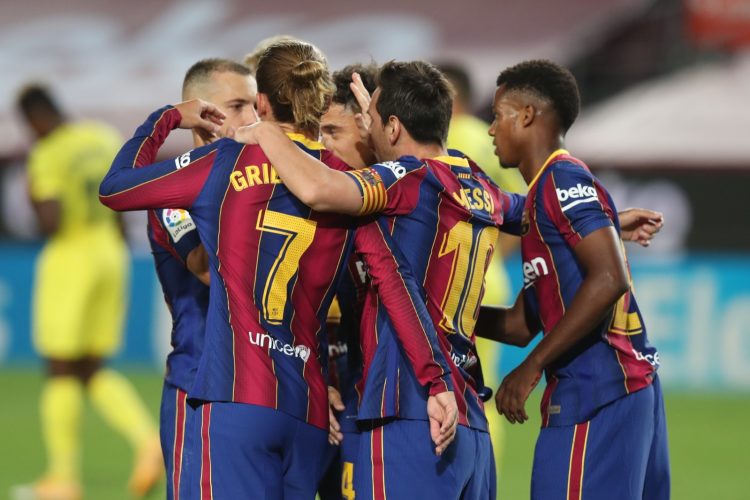 Following a tumultuous offseason, last season’s runners up, Barcelona, returned to La Liga on Sunday night and put on a show for their fans at home. They comfortably put four goals past a hapless Villarreal outfit, and, interestingly, all goals came in the first half itself.

Youngster Ansu Fati played a starring role in Barcelona’s comfortable opening-day victory, scoring an impressive brace. Barcelona skipper, Lionel Messi, was also in the thick of things and pitched in with a goal. The final Barcelona goal was the result of a poor clearance attempt by Villarreal’s Pau Torres.

The first game under the new Barcelona coach, Ronald Koeman, was promising, and there are certainly a few things to talk about from last night’s stunner.

On Sunday night, at a deserted Camp Nou, Ronald Koeman fielded his first every competitive starting XI for Barcelona. With Ansu Fati, Antoine Griezmann, and Lionel Messi leading the attack, goals were always on the cards.

However, it’s the midfield trio of Philippe Coutinho, Frenkie de Jong, and Sergio Busquets that offered the much-needed respite to Barcelona fans. Koeman, in his first match in-charge, proved that he’d prefer his Barcelona outfit to outscore their opponents; not seat deep and soak up the pressure.

The team came out with guns blazing and took the visitors for a ride. The passing was swift and coherent. The pressing was on point, and the players played with a clear objective in mind.

It’s too early to earn the complete confidence of the Blaugrana followers, but Koeman has certainly put his best foot forward with last night’s impressive goals galore.

#2 Lionel Messi gets off to a scoring start

Following the embarrassing 8-2 defeat to Bayern Munich, Lionel Messi formally put in the request to leave his boyhood club. The club captain asked the president Josep Maria Bartomeu to let him move to his desired club for free; not force him to honour the €700-million clause.

Bartomeu blatantly refused to oblige and forced Messi to stay at Camp Nou, at least until the end of his contract in 2021.

The situation — and the confusion surrounding it — urged Messi to come forward and explain his side of the story. In the interview, he set the record straight and highlighted the bad blood between him and the president. He confirmed his stay, of course, but no one knew how he’d deliver on the pitch.

Last night, Lionel Messi, took part in competitive football for the first time since the fallout. And fortunately, his head looked right in the game. He scored from the spot through a well-struck penalty and was impressive throughout the match.

A thoroughly impressive performance from the Barcelona number 10.

#1 Ansu Fati picks up where he left off

The 2019/20 campaign was one of Barcelona’s worst in recent history. They were beaten in La Liga, bested in Copa del Rey, and utterly humiliated in the Champions League.

Yet, amongst the doom and gloom, there was one bright spark that promised plenty. Barcelona’s academy star, Ansu Fati, was the biggest positive from last season, and the teenager seems to have picked up right where he left off.

Starting on the left-wing, the Spain international, kept the Villarreal defence on its toes all night long. He opened the scoring for Barcelona just before the 15-minute mark from close range and doubled his tally only minutes after.

His impressive brace set Barcelona on course for a comfortable win, but the 17-year-old managed to draw another golden opportunity for his team, winning a penalty on the 34th minute. Messi stepped up to convert.

Ansu Fati was deemed the player of the match for his immense contribution and deservedly so. Very few players manage to be this decisive at such a young age, and we believe he’ll only get better with regular football and exposure.