Spa-Francorhamps saw just 3 laps, that too, behind the safety car in undrivable, unraceable conditions! 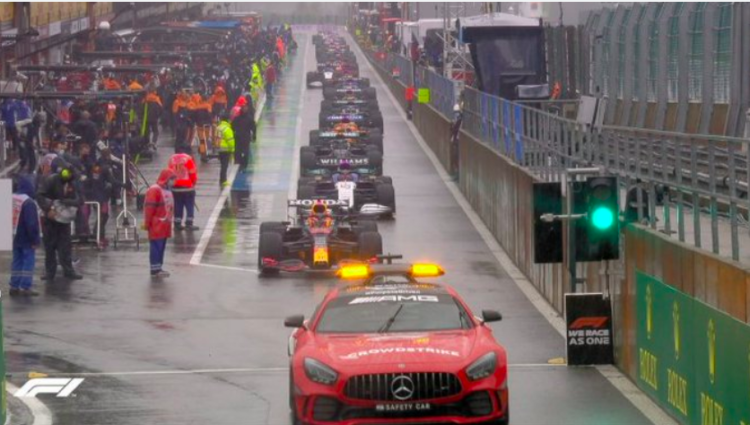 We race as one but even then there was just one winner at Belgian GP race in Formula 1- and it was no one!

Absurd and needless as that line were the proceedings at the ill-fated, rain-soaked, undrivable, and ultimately, unraceable Spa-Francorchamps for the entirety of the evening in Belgium. With there being no more than 3 laps out of 44, and that too, with all twenty cars lining up behind the safety car, it wasn’t a Formula 1 Grand Prix, at the end of the day, that one got to witness.

It was actually, for the lack of a better word, a rain-spoilt Grand Prix.

A podium finish without a podium actually being in attendance for that very driver that many wish would get to join Mercedes in 2022, George Russell did well enough to keep his car on the race track and behind Max Verstappen, the pole-sitter and declared race winner at Spa-Francorchamps.

This meant that third place, i.e., P3 went to Lewis Hamilton, who also began from third on the grid, trailing the driver who he would hope doesn’t get to enjoy a lead over him, if at all, it happens that Mercedes and Toto Wolff sign the young Englishman for the next F1 world championship season.

Nonetheless, thoughts with George Russell, who would love to have battled out there and then reach the spot he’s so desired all this time- the podium.

Even then, it’s a huge morale-boosting performance of the talented Briton, who, as of August 28, i.e., Saturday, made massive headlines by putting a Williams- for all the non believers- second on the grid and hence, in a formidable position for Sunday’s race which was swallowed by rains that played the tyrant.

Moreover, the much-discussed Hamilton versus Verstappen receded into being a no show for no fault of either drivers.

But there indeed was a catch at the Spa Francorchamps in that those inside the points, which is from P1 until P10- were awarded half the points, which doesn’t do too much, at the end of the day, for Red Bull’s hopes at delivering Mercedes a massive hit.

So were the Black Arrows saved by inclement weather- well, it depends on whose fan you really are: a Verstappen-backer or a Lewis-devotee?

That being said, it wasn’t quite the race weekend that McLaren’s Daniel Ricciardo would’ve wanted for himself and his Papaya-liveried team, the 2021 Belgian GP being the Australian’s 200th F1 race.

But on an evening massively sprayed by unending rains, which continued for nearly four back-to-back hours, prompting not one but two red flag sessions, there were some rather interesting highlights as suggested by the images captured from the paddock during the team the drivers were simply waiting and waiting for things to get better.

Firstly, a victim of Saturday’s big shunt at Raidillon, Lando Norris was found sleeping in the team garage. Secondly, the likes of Vettel and Schumacher were seen playing football, that very sport in which their great German nation excels, or should we say, excelled back in the day?

Moreover, while Kimi Raikkonen sported the typical quintessential unflappable albeit bored look about the whole proceedings, his chances of doing any magic here at Spa ruined by a P19 on the grid, things were a bit enterprising in the Red Bull garage.

Sergio Perez, who even before the start of the race, went off at turn 6 to crash in to the walls, finally saw his car repaired, the Red Bull mechanics pulling off a blinder inside an hour, prompting the Mexican to congratulate his team crew for their commanding effort.

But all of this, eventually, as one saw, went down the drain as there was no Belgian GP as such after all!

Fernando Alonso, meanwhile, seen hanging out with a cup of coffee, one too many, for that’s all you can do in picturesque surroundings amid the Ardennes with no live action, would’ve started from eleventh on the grid and one assumes, would surely have breached into the top ten standings during the contest.

Bottas, on the other hand, who recently turned 32, would surely be thanking his stars for his qualifying performance, despite driving a Mercedes, was hugely underwhelming. Though, it would hurt the under-pressure driver to leave Spa without collecting any points whatsoever.

While it would’ve been nice to see what both Ferraris, eventually slated to begin from the top ten, might have gone on to garner, it never came to that in the end, did it?

A race lost to rains and quite some pain in the end!

Giovinazzi, who much like Raikkonen, is under pressure to save his Alfa Romeo seat for 2022, was fourteenth on the grid and stayed put there until the ‘end of the race’ behind the safety car. No points anyhow.

Moving on, the circus now heads to Zandvoort, where the home of the Dutch GP will be looked up to for producing a cracker of a contest, not a damp squib like Spa.

Here are the driver standings post Spa for your contention: