Big shock to Team India: Jadeja out of T20 series after being hit by a ball at the helmet 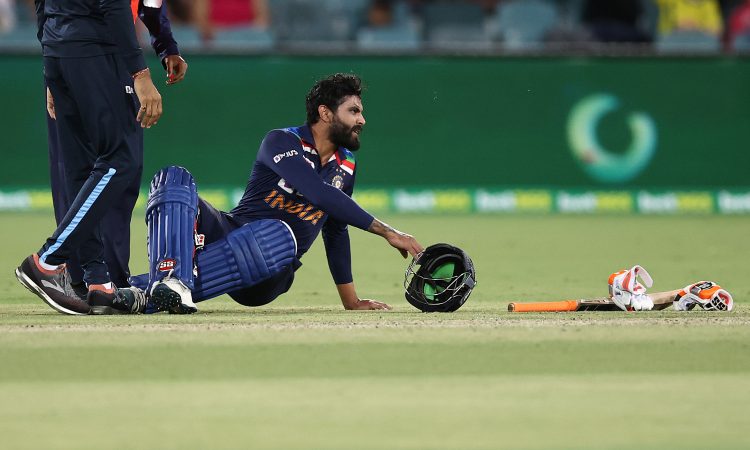 There has been a bad news for Team India after the first match of T20 series. All-rounder Ravindra Jadeja has been ruled out of the T20 series due to concussion contention. He was hit at the helmet in the last over of India’s innings. After this, he could not return to the field. Now he has been replaced by fast bowler Shardul Thakur in the team.

The BCCI said in its statement that the medical team of the board examined Jadeja during the innings break. He has just been placed under observation, he will be taken for the next scan if necessary. Shardul Thakur has been given a chance as his replacement. Shardul was currently part of the ODI team.

Shardul was given a chance in the last match of the 3 match ODI series. In that match, he took 3 wickets for 51 runs.

Jadeja had a ham-string complaint

During India’s innings, batsman Jadeja was complained of ham-string in the 19th over. After this, Mitchell Starc’s ball in the 20th over went to Jadeja’s helmet. Jadeja had a brilliant 44-run unbeaten innings off 23 balls in the match.

What is concussion replacement?

For example, if a batsman is injured, only one batsman can come to play in his place. If he is replaced by an all-rounder, then he can only bat. Many teams have implemented this rule since the rule came into force.

Chahal in place of Jadeja in team

The Indian team used the ‘concession substrate’ for the first time. In place of Jadeja, Yuzvendra Chahal was sent to the field as a replacement. He took 3 wickets in the match. He was declared man of the match for his outstanding performance. Australian coach Justin Langer was angry at India’s decision. He was also seen arguing with match referee David Boon after the first innings.

India won the match by 11 runs

In the first ODI of the series, India defeated Australia by 11 runs. Batting first after losing the toss, India scored 161 for 7 wickets. Lokesh Rahul had scored the highest innings of 51 runs. In response, the Australian team was able to score 150 runs at the loss of 7 wickets. The next 2 T20 matches between the two teams will be played in Sydney on 6 and 8 December.