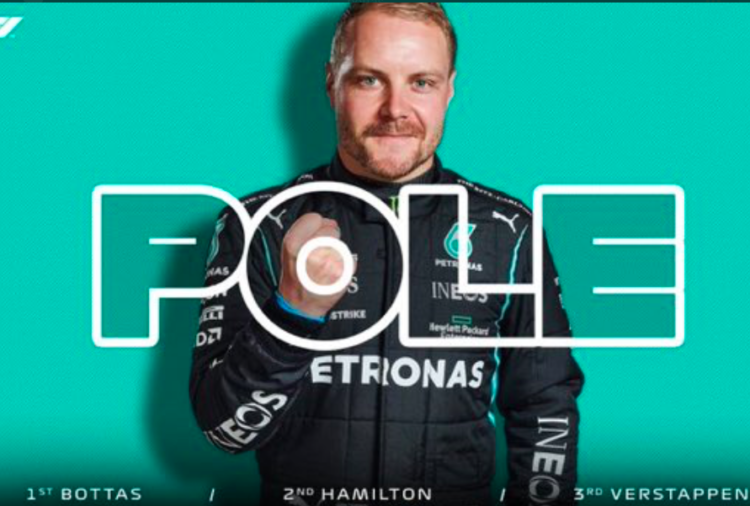 The last that one saw Finnish Valtteri Bottas on pole was at Sakhir in 2020. Since then, the business of grabbing the top slot in the grid position has been pretty much down to Lewis Hamilton and Max Verstappen.

But out here under the azure skies and gusting winds of Portugal, the Mercedes driver came out with a different intent, denying teammate Lewis Hamilton his hundredth pole as he captured the seventeenth of his memorable Formula 1 career.

Max Verstappen, who for the better part of his quail run found it difficult to set mesmerising pace, came in for a third, beating teammate Sergio Perez for the third consecutive time this season. Quick, as always in the middle sectors, it were the tricky turns four, nine and thirteenth that the Flying Dutchman found difficult to negotiate.

Red Bull-newcomer Perez stacked up his machine just five-tenths behind Max, on a competitive fourth, not really the worst grid position for a driver who will definitely target a better race-finish than the obdurate challenge Imola posed at the Mexican.

For Ferrari, though, it was an absolute change in fortunes between Sainz and Leclerc as for the first time this season, Maranello’s new Spanish recruit topped the teammate battle against the Monegasque, managing a decent P5 as his teammate had to contend with an uncharacteristic P8. Charles was three-tenths down on his new teammate.

Meanwhile, Esteban Ocon, one of the quiet stars of this season, utterly underrated and somewhat subdued aced Q3 in stacking up his Alpine machine for a very respectable P6, finishing just a thousandths of a second ahead of the charging McLaren of Lando Norris, the papaya-organce coloured machine once again looking in threatening pace.

Alpha Tauri’s Pierre Gasly, who captured a P9, would be a tad bit disappointed considering in the last qualifying he set a very competitive P5, but he’d be happy in being the only car from the Italian stable to have made it to Q3.

The pleasantest surprise, if it must be said so, was to see Sebastian Vettel’s Aston Martin queuing up in a very impressive P10th.

This would be the first time that the former four-time world champion was able to make it to Q3 since the 2020 British GP.

The two Alfas of Kimi Raikkonen and Antonio Giovinazzi, who had looked decent in the initial qualifying run found themselves knocked out in Q2 but the man described as the Italian Jesus secured a respectable,  P12, finishing just behind “Mr. Saturday,” George Russell, who bagged P11.

Russell’s was the only Williams that was able to make it to Q2 but failed to progress ahead although his Mercedes-powered machine’s 1:19:109 matched the respectability you’d associate with an ace driver contending in a significantly faster machine.

Fernando Alonso, meanwhile, struggled to set the pace and could manage a lowly P13 setting a not so sterling 1:19:456, though enough to land just ahead of rookie driver Yuki Tsunoda, who positioned the other Alpha Tauri on P14.

Raikkonen, who struggled for grip and did find his track times deleted in Q2, gathered a P15, comfortably knocked out by his younger teammate. He’d do well to remember that the last time around he raced around at the Algarve, he managed a P11. Can he finish inside the top ten this time around- we’ll have to wait and see.

Biggest disappointment of the evening!

If there ever was something like the biggest disappointment of the evening, then it would go to McLaren’s newbie Daniel Riccardo, who finished with a highly uncharacteristic P16. Make no mistake for at both Bahrain and Imola he managed a competitive P6, which was a position even ahead of young Lando Norris.

But here at the topsy-turvy track the Honeybadger was bereft of any characteristic wide-eyed smiles. He’s got a tough race up ahead, you could say.

Meanwhile, the final four were the usual suspects, with both Haas’s and the Williams of Nicholas Latifi finding themselves on the final three slots, Latifi managing a nineteenth followed by his teammate. Though, it was Lance Stroll in his disgruntled Aston Martin who would make it to an unhappy P17, very unlikely of a driver who, thus far, has made light work of a teammate who happens to be a fiery four-time world champion.

How far can Stroll make it up on Sunday would be a key question. Though, the biggest of them all would be whether Bottas can get off to a flier and keep Hamilton at bay to secure what could very likely be his first victory of this brand new season.

Meanwhile, can Max play a part in the battle up ahead? We’ve got a real race at our hands!