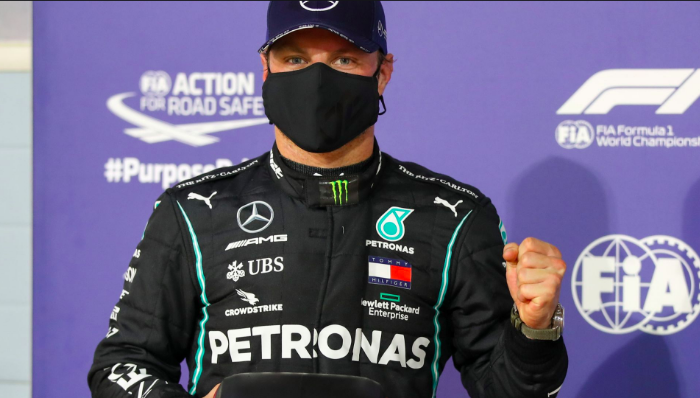 Amid humid conditions and the challenge of racing on a circuit that’s harsh on the tyres, Finnish driver Valtteri Bottas kept his cool to take pole position at the Sakhir GP. Temporary teammate, George Russell, stepping in for COVID-positive Lewis Hamilton, scored the best start of his career in taking second.

And in so doing, Mercedes- familiar hammerers of the remainder of the grid- usurped all to lock out the front row at the Sakhir GP.

But was it going to be any easy whilst contesting on a twisty layout at the heart of the desert where FORMULA hasn’t raced before?

Nonetheless, the 2020 Sakhir GP appears as if it could just go down to the wire. There’s no Lewis, so obviously the door is open for so many others (who’d missed out on a win) to step in.

Not that the fans would complain, or would they?

It doesn’t seem as if Sunday’s upcoming run shall be contested minus last minute dramas and thrilling performances that made the much-important quali run a bit hard to forget. The Leclerc (P4) versus Perez (P4) versus Kvyat (P6) offers a mouthwatering prospect right up the order outside the three fastest men on the grid.

But will Valtteri’s task be any easy?

For starters, Valtteri Bottas registered his Sixteenth pole and his fifth overall in 2020, it doesn’t seem as though beating a much younger teammate in George Russell, would be a walk in the park.

On the contrary, the experienced Finn may not have an easy Sunday at all since a day before Saturday’s quali result, he mentioned, “it would not be too nice to be beaten by George Russell,” after the young Briton hung him to dry on Friday’s free practice.

But all of that said, Ferrari’s Charles Leclerc, courtesy his fighting fourth, reminded once again- he’s done remarkably well- in a season where nothing’s gone right for the Scuderia.

Surely, it would matter less for Kimi- P19- that he beat the rookie from Brazil (born in Miami).

That said, here’s what a leading sports publication noted of a brand new layout for FORMULA 1 speaking off the frontrunner who made news albeit in Lewis’ absence.

“His late best lap in 53.377 seconds at the short, high-speed outer loop of the Bahrain International Circuit was just enough to pip Russell’s best effort, clocked on his team’s unexpected third Q3 run, by 0.026.”

Quoting the noted driver, it said, “It was a different situation today,” said Bottas. “I just wanted to focus on my own doing and I managed to do that. We’re in a great place as a team and it’s good to be on pole. I am happy with that.”

That told- it wasn’t that bad an effort for Verstappen, P3, followed by a string of performances that have, of late, made life for the flying Dutchman difficult.

Leclerc, who bounced back strongly following an out and out defeat at the hands of Vettel at Turkish GP, ensured the horse was prancing.

But come race-day can Ferrari hold onto their own? We shall have to await the grren light!

Sergio Perez of Racing Point emerged with another credible Saturday drive, meanwhile, and Daniil Kvyat of Alpha Tauri and Daniel Ricciardo, followed in with 5th, 6th and P7.

Meanwhile, here’s what Sky reported on the interesting line-up we have for the Sakhir GP:

Their first flying efforts were completed on used tyres, which meant they initially sat behind Max Verstappen and Charles Leclerc on the leaderboard.

But the Black Arrows went again during the middle phase of the final segment of the session, with Bottas leading the way and blitzing to a 53.377s, with Russell 0.142s adrift.

On their final runs in the final minute, Bottas could not improve his time but held on to pole as Williams regular Russell could only close to 0.026s in what was the first time he had competed in a Q3 session.”

That told, one wonders how easy was it anyways on the tyres, Sky reporting, “The top-10 shootout began with Bottas leading on used softs in 53.760, ahead of Russell, before Verstappen cut that to 53.591 and Leclerc grabbed second just behind him.”

Come the race-hour, all eyes shall be keen on the very venue where Leclerc’s nearly certain maiden win, eventually became his first podium.

And make no mistake- the top three line-up in itself, offers a great prospect to witness what could be a live-wire of a race.