Egyptian tennis player Youssef Hossam's lifetime ban for match-fixing has brought to fore the issue of unethical professionalism in tennis, yet again. 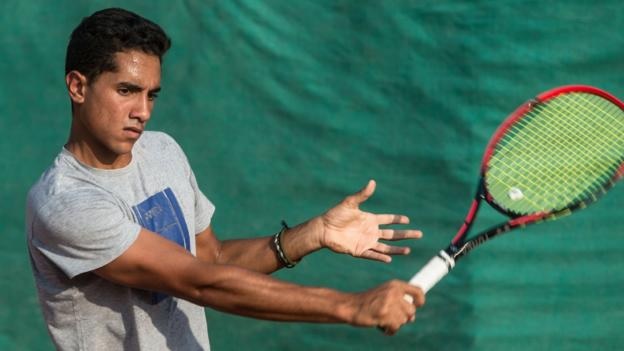 Youssef Hossam was banned for life after being convicted of match-fixing (Credits: Twitter/BBC)

Last Monday Youssef Hossam, who had been given a provisional ban last year, was banned for life after being convicted of for match-fixing and 20 breaches of the Tennis Anti-Corruption program.

Over four years, dating back to when he was around 16 or 17, Hossam was found to have “conspired with other parties to carry out an extensive campaign of betting-related corruption at the lower levels of professional tennis.”

Hossam was convicted of 21 breaches which included

Youssef Hossam had it coming

Tennis has seen siblings excel together, Venus- Serene Williams, Bob-Mike Bryan, Andy-Jamie Murray. However, Youssef and his brother Karim have been a part of a different league.

In the year 2018, Karim Hossam was handed a lifetime ban for match-fixing and a fine of $15,000 after being convicted of multiple match-fixing offences including betting, providing “inside information” and failing to report corrupt approaches.

Karim fell into the trap and committed offences between 2013 and 2017. Unfortunately, a young lad with great potential, Karim had also attained a career-high ranking of 337 in September 2013.

To see the downfall of a player so closely as Youssef did of his brother Karim, it is rather disappointing he learnt nothing. Youssef could have easily taken an ethical path to success, and not repeat the mistakes made by his brother.

Youssef’ views on his brother’s career assured that he was aware of what it takes to be an accomplished player. He spoke to SPORTS360 on why his brother could not carve out a better career:

“When he finished playing juniors, he was excited to start playing ITF Futures and did really well at the start but he kept playing Futures and didn’t get out of it. It felt good to win so many titles at that level and didn’t step up to the Challenger Tour. I don’t want to fall into that trap,”

Ironically, Youssef could not resist the excitement of the professional tour and gave in to the temptation to make more money by engaging into unlawful activities that the TIU (Tennis Integrity Unit) condemns.

He came from a well-to-do family, driving the high-end Jaguars. But at the peak of his junior career, he was on the lookout for sponsors. It was at this juncture in his career that the situation got better of him.

In 2016,  Junior world No.19 Youssef Hossam was carrying the Egyptian flag solo in Melbourne and the 17-year-old had big hopes of becoming Egypt’s first top-100 player since 1978 and just the second in history to do so.

Youssef Hossam starred in a series of tennis drill video done by the Mouratoglou Academy (run by Serena William’s coach)  and trained there on an occasional basis. But this feat was short-lived as his failure to stay true to the sport, led to his downfall.

Match-fixing is spread out in the world

The cases above are all from Egypt, however, the scandalous offence of match-fixing is spread out widely through different continents.

On 18 January  2016, a joint Buzzfeed and BBC investigation reported alleged widespread match-fixing, which involved Northern Italian, Sicilian, and Russian betting syndicates, which incorporated suspicious betting at major tours such as Wimbledon. The reporters examined betting incidents on a total of 26,000 matches.

Another major incident from 2007 involving Russian player,  Nikolay Davydenko came into the spotlight again in 2016. He was suspected to have fixed his match against  Martin Vassallo Arguello in Poland, but the ATP found his not guilty.

In  2016, an investigation found that several millions of dollars were placed on the match from Russian-based accounts. Leaked files to the joint Buzzfeed and BBC investigators found 82 instances were Davydenko had sent or received text messages from the suspected head of an Italian sports betting syndicate.

Probably it is after finding the above cases that in February 2019 the BBC said that tennis was a “sport riddled with corruption”.

Steps to combat match-fixing in tennis

The first time, the tennis organizations decided to stand united against match-fixing was in 2008, when the organization Tennis Integrity Unit (TIU) was set up with support of ITF, WTA, ATP and Grand slams. The TIU has the authority to impose fines, bans and investigate match-fixing.

Despite the many actions taken by the ITF to prepare young players at the time of registering as a professional is not enough. These actions include awarding young teenagers about the unethical match-fixing, it’s repercussions and the termination of a potentially great tennis career.

The issue of match-fixing in tennis is an ongoing problem. An organisation called the Tennis Integrity Unit was set up in 2008 following an investigation into the problem. Since then there have been a few cases of match-fixing that have been busted by the TIU.

From Egypt itself, in  August 2019,  Issam Haitham Taweel was suspended for five years for match-fixing and other corruption offences.

The recent ban has made the spectators aware of the other side of the tennis court, one that is rarely even considered to exist. While other sports like cricket have been in the news for the fixing incidents, tennis has remained away from such allegations.

However, only because it is rare, does not mean immoral actions of such sort is absent from the tennis. Moreover, this dark side of the tennis world only gives another reason to hail those who play with integrity and valour amidst these conditions.