Manchester United produced another poor performance at Brighton but managed to escape with all three points via a dramatic stoppage time winner. 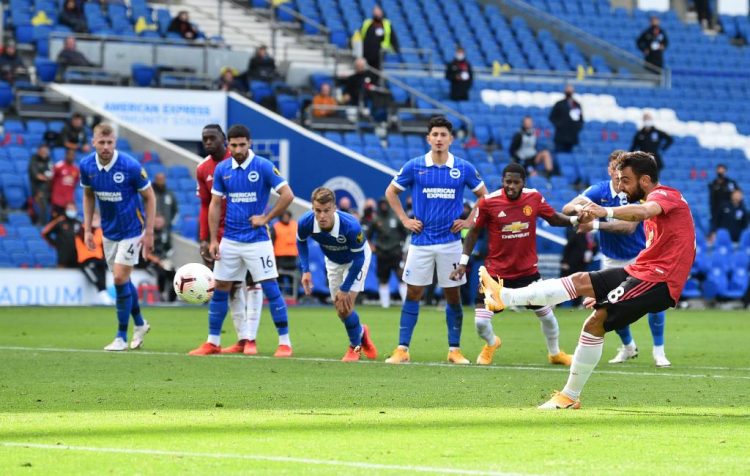 To say that Ole Gunnar Solskjaer’s side were lucky to win the game would be mild. Brighton had 18 attempts compared to Manchester United’s seven and Graham Potter’s men hit the woodwork of David de Gea’s goal five times during the game.

Leandro Trossard hit both the posts and crossbar and they had a point won when Solly March scored in the fifth minute of stoppage time.

But some late drama and Neal Maupay’s inexplicable decision to raise his hands inside the box in the last action of the game led to the penalty and Manchester United escaped with three points from the Amex Stadium.

Manchester United produced a lethargic and disjointed performance against Crystal Palace last weekend that led to a defeat in their first Premier League game of the season.

While they looked a bit more of a threat in attack, the weary nature of their performance continued at Brighton as well. The Red Devils are playing at a pre-season pace because they are essentially at that stage in terms of fitness.

Paul Pogba still looks a few weeks of training and games away from being fit and match sharp and that is the case for most of their players at the moment. The squad barely had a week of training together before they were thrown into competitive action and the lack of fitness and match sharpness are evident.

While they are expected to get fitter and sharper over the course of the next few weeks, Ole Gunnar Solskjaer’s side need to find a way to get results without being nowhere close to their peak fitness.

Both Crystal Palace and Brighton looked like teams who had three extra weeks of training in their legs compared to Manchester United players.

It is difficult to criticise the tactics or the set-up when one is aware that the players are not sharp enough at the moment to perform anywhere close to their best.

Solskjaer’s side will host Tottenham next weekend at Old Trafford and the Manchester United manager will have to find a way to get his team playing somewhere close to their peak in the next seven days as Jose Mourinho’s team will hurt them if the lethargy in their performance continues.

The Frenchman isn’t playing as badly as it is made out to be but for the moment he is severely lacking in fitness and match sharpness. Paul Pogba’s preparation for the season was even more disruptive than his team-mates as he was isolated for two weeks after contracting the coronavirus.

He was essentially thrown into the mix of competitive football on the back of a few days of training. He looks off the pace because he is behind the curve in terms of fitness when compared to the players he is being asked to perform against. Being asked to play in a double pivot in the most congested area of the pitch, Pogba’s lack of fitness and match sharpness is getting even more exposed.

He is lacking a yard of pace at the moment, he is getting to the ball a second slower and has been generally underwhelming in the first two games of the season.

Ole Gunner Solskjaer has Donny van de Beek in his ranks to take Pogba’s place in the team. The Frenchman needs to build his fitness up to somewhere close to his peak before he should start again.

While the Manchester United manager could choose to play Pogba through this phase with the hope that he will gain his sharpness through more minutes, it would be a bad idea if he starts the next couple of games on the bench with Van de Beek taking his place in the starting eleven.

#3 Bruno Fernandes’ work rate is flying under the radar

Bruno Fernandes whipped in the ball from a free-kick that led to Manchester United’s first goal, he provided the perfectly weighted through ball for Rashford to latch on to and score the Red Devils’ second at Brighton and in the tenth minute of stoppage time the Portuguese scored the winner from an emphatic penalty.

The 26-year-old has become the heartbeat of the team since he joined the club in January and has scored 13 times and provided ten assists in 25 appearances for the club. With such numbers, it is hard to ignore the other facets of his game.

Fernandes covered 12 KM of the Amex turf against Brighton, more than any other player in either of the two teams. Like most of the Manchester United players, he is also behind the curve in terms of fitness but that has not deterred him from working his socks off when not on the ball.

He chased down midfield runners, often provides cover on the left when Luke Shaw marauded forward and always made himself available for a pass from a team-mate.

While some players try to hide on the pitch when not at their best, Fernandes keeps on trying things, and most importantly, he works hard as a man possessed.

It is not hard to understand why Ole Gunnar Solskjaer loves playing him even when he is not at his best as the Manchester United manager is aware that Fernandes will put his all on the pitch even if he fails to create or score a goal.

It is difficult to find a creator of his quality who is willing to put in the graft as well when things are not going his way.

Also Read: Has Manchester United’s pursuit of Jadon Sancho turned into an exercise to appease the fans?