Chasing a modest 158 for a win, Buttler and Malan put on a winning stand of 87 to put the result beyond doubt. 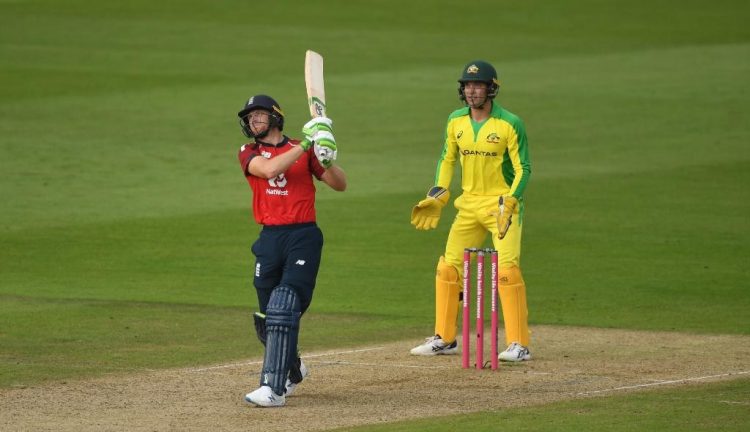 Past masters in the art of bouncing back from defeat, one would have expected the Aussies to bring their best game to the park and restore parity in the three-match T20I series against their traditional rivals on Sunday.

What was in evidence at the Ageas Bowl, however, was in stark contrast to what the dressing room talk in the Baggy Green corner might have been. For, far from the Aussies trying to wrest the momentum from England, it was the latter which rode roughshod over them and took the series with a commanding win.

Both teams went in with the same XI that featured in the opening tie. With the pitch a batting beauty, it was hardly a surprise when Australia Aaron Finch won the toss and decided to bat first. Also, with the Aussies slipping rather sensationally in the chase in the first game, the skipper, perhaps, was wary of going down the same road again.

However, as it turned out, the toss was probably the only aspect of the game that went right for the Aussies as nothing else did. The Baggy Greens were under the pump as early as the fourth ball of the opening over as a thunderbolt lifter from Jofra Archer touched the gloves of David Warner on its way to keeper Joss Buttler. As the Englishmen went up in appeal, the umpire raised his finger. However, the swashbuckling opener went for an immediate review as he felt the ball hit his arm. The third umpire ruled that the ball had, indeed, licked his glove on its way to the keeper and sent him packing for a duck.

The Aussies sprung a surprise by sending in stumper Alex Carey instead of Steve Smith, the regular No. 3, at the fall of Warner’s wicket. However, the move came a cropper as Carey fell for 2, edging a Mark Wood delivery to Buttler.

Smith joined his skipper at the crease and the two looked to be taking Australia on the road to recovery before the former captain fell short off the crease while going for a suicidal single. Smith hit a Tom Curran delivery towards mid-on and set off for a run that simply wasn’t there. Skipper Eoin Morgan hared in from the mid-wicket region and, with a single stump to aim at, hit bull’s eye. The on-field umpires referred the decision to the third umpire, who ruled it ‘out’.

With Smith back in the shed for 10, the Aussies were in a spot of bother.

All-rounder Marcus Stoinis arrived at the crease at the fall of Smith and looked determined to atone for his failure to take the Aussies past the finish line in the opening game.

In the company of the skipper, the burly all-rounder from Perth took the Aussie score to 79 in the 12th over when the former fell to Chris Jordan. In trying to cut a back-of-a-length delivery from Jordan, Finch got an inside edge which crashed onto his stumps. Sadly for the Baggy Greens, however, the captain’s knock of 40 off 33 balls, laced with 4 boundaries and 2 sixes, ended way too early.

Stoinis eventually fell for 35, edging a leg-break from Adil Rashid to Buttler, in what would count as another failure to fulfil his role of a middle-order enforcer.

With a handy 26 off 18 balls from Glenn Maxwell and similar contributions from Ashton Agar and Pat Cummins lower down, the Aussies closed their innings at 157/7, a good 15-20 runs short of where they had hoped to finish.

Jordan was the pick of the England bowlers with 2/40, while Archer and Wood bowled fiery spells and finished with a wicket apiece.

The English reply was majorly about Buttler blitz, as the explosive keeper-bat went after the bowlers from ball one and put his team firmly in control. The early exit of Jonny Bairstow for 9 didn’t seem to trouble England at all as Buttler and Dawid Malan put the game beyond the Aussies with a rollicking stand of 87.

Bairstow’s dismissal was rather unfortunate, as, in trying to negotiate a rising delivery from Starc, he mistakenly knocked off the bails and was out hit-wicket.

Malan looked to have carried his form from the last game and by the time he was sent back by Agar for 42, England were well on course to a win. Though the Three Lions lost a couple more wickets in the chase, the result was never in doubt as Buttler and Moeen Ali closed out the win with more than a couple of overs to spare. Buttler finished with a brilliant 77 off 54 balls, with 8 fours and 2 sixes.

With the series now in the bag, England would go for a clean sweep in the third and final game scheduled for Tuesday. Though the Aussies don’t have a lot else but pride to play for, they would look to finish the series at 1-2. A favourable result would also give them a winning momentum going into the ODI series which comes next.