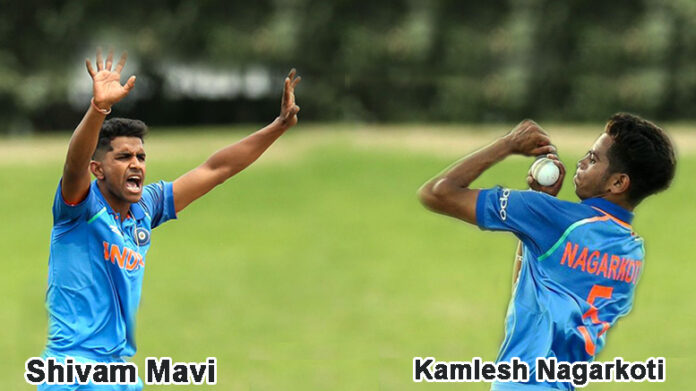 India’s Under-19 pace duo of Shivam Mavi and Kamlesh Nagarkoti are making waves in the cricket circuit and there is a promising chapter that lies with them in the upcoming future.
Pace bowlers are slowly on the rise in Indian circuit and the current crop of players in the senior team has also shown that with different attributes and variations. India are not known for serious lethal pace bowling when it comes to speed, but the clocks are ticking slowly in that direction.
Mavi and Nagarkoti have impressed largely in the ongoing ICC U-19 World Cup and have picked 15 wickets between them so far in four matches as India progressed to the semi-finals after thrashing Bangladesh. Against the young Tigers too, the duo looked superb and seemed to bowl with a lot of confidence. Under the guidance of coach Rahul Dravid, the team are doing well and a lot of credit goes to the pace quartet for chipping in equally like the batsmen.
ALSO READ: U-19 Wizard Shubman Gill Provides A Savoury Touch With The Bat
Shivam Mavi
Matches: 4, Wickets: 8, Best: 3/45
Kamlesh Nagarkoti
Matches: 4, Wickets: 7, Best: 3/18
So what does the scenario bode for Indian cricket when it comes to young players wanting to become genuine quicks? In a nation that has emphasised a lot on batting, and the youth wanting to become like Sachin Tendulkar and Rahul Dravid, the picture now is quietly changing. There is an interest now in becoming fast bowlers.
Former players impressed by the duo
Sourav Ganguly, Virender Sehwag and Danny Morrison were impressed by Nagarkoti and Mavi in the ongoing ICC U-19 World Cup. Against Australia in the first game, the duo clocked in excess of 145 km/h consistently. That was bagged with wickets and it left the trio of former cricketers impressed largely. Ganguly was so moved by the duo that he urged the likes of Virat Kohli and the authorities concerned to keep an eye on the pace duo.
This is a great moment for the teenage duo and as Sehwag pointed out, the hunger to continue is a must.

@imVkohli @VVSLaxman281 @BCCI keep an eye on two under 19quicks ..mavi and nagarkotti ..bowling at 145 in newzealand ..brilliant ..

This was serious pace from our boys. Solid beginning beating the Aussies by 100 runs. May the hunger continue and we carry the momentum. #U19CWC pic.twitter.com/zL75RDxjN3

Like my combox colleagues here at #Tauranga… I’m super impressed with @IndiaU19 pace duo of Nagarkoti & Mavi ??? Future looking bright for India! Pace shoe on the other foot nowadays! #pacetoburnyoungindia

Attributes & achievements
Both Nagarkoti and Mavi have gone on to impress everybody including their opponents. Both can not only bowl quick, but it is indeed serious pace blended with accuracy and vision. The duo have been largely benefitted from the MRF Pace Foundation and picked the tricks on how pacers maintain themselves. Their quickness have come by bowling plenty at the nets with their coaches laying the foundation on how to go forward.
In an exclusive interview in the Times Of India, current BCCI junior selection committee stated that there is huge potential and talent in the duo. “We hope they will inspire the next generation of cricketers to take up pace bowling. As selectors, we not only saw potential and talent, we saw their fitness, fielding and most importantly the right attitude.”
They starred for India in the Youth ‘Tests’ in England last year. They picked 16 wickets between them in the first game to pounce on England. Nagarkoti then went on to become the leading wicket-taker with 14 wickets at 15.14 from two games. Both the pacers also shared 13 wickets in five games in the Under-19 ODI series when England toured India earlier in 2017.
They aren’t express tall but have decent heights. Nagarkoti is 5’8 and Mavi is 5’9 but what matters for any bowler is how they bowl and clearly it shows these two can put in the work irrespective of physical attributes.
India’s promising pool of talent
India boasts of diversity and variety in attack in the senior team with bowlers who can excel in different conditions. Jasprit Bumrah is a fine example of a talent that has been impressing in all three formats. The pool of talent in pacers is eye catching as we currently witnessed the likes of Siddharth Kaul, Basil Thampi, Mohammed Siraj, Shardul Thakur and Jaydeb Unadkat too making the right noises and getting chances.
Therefore it will be vital for the duo to learn from the current crop of senior pacers on how to succeed at the highest level and bowl consistently using one’s own strength and focus. What else the two young guns possess is their prowess in fielding as well and that is a rare feat to have.
Pace/accuracy which way to go?
It’s a simple fact as most cricketers would say both. Nagarkoti and Mavi have the raw pace and are well aware of the importance of being accurate too. With their abilities to extract bounce and the desire to try variations, the effect of accuracy would well be in place. In the ongoing World Cup, they have bowled accurate at most times but the challenge will lie in maintaining it at the highest level.
The likes of former fast bowling legends Shoaib Akhtar and Brett Lee showed what accuracy can do when you have pace. Mitchell Johnson too showed the same when he wrecked havoc in the latter stages of his career. Nagarkoti and Shivam will have to keep these players in mind and also look up to Mitchell Starc on how he extracts the positives from bowling quick.
India’s journey of U-19 pacers
India have won the coveted tournament thrice besides reaching two finals. Over the years several players showed promise and talent with the likes of Sandeep Sharma, Pradeep Sangwan, RP Singh, Laxmi Ratan Shukla and Siddharth Kaul. Not everybody went on to reach the heights in the biggest stage, besides RP Singh, who went on to represent India in 14 Tests and 54 ODIs.
Nagarkoti and Mavi boasts of greater skills then most of their predecessors but know that the fame they have shot up to can only be maintained if they keep performing and digging in with hard work.