Chelsea are more than interested in Declan Rice but West Ham do not appear to be keen to cash in on him yet and the player himself is not pushing for a transfer. 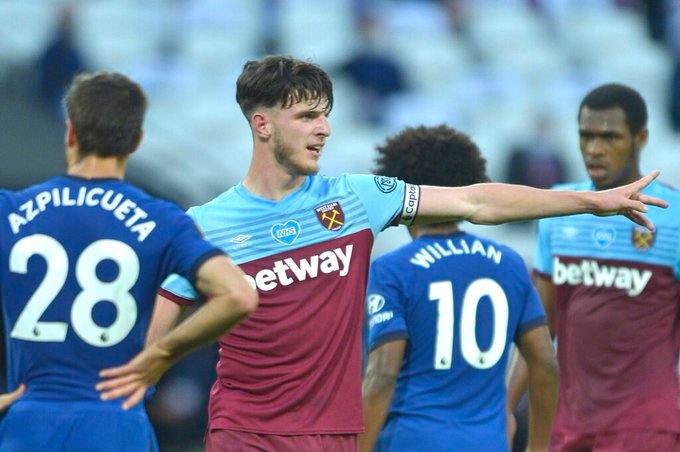 Chelsea have already spent big in the summer transfer window to bring in Hakim Ziyech, Timo Werner, Ben Chilwell, Thiago Silva and Malang Sarr. They are expected to agree on a deal worth €100m with Bayer Leverkusen for Kai Havertz in the coming days and are still in the market for a goalkeeper.

But going into the window, West Ham’s 21-year-old defensive midfielder Declan Rice was Chelsea’s top target. Rice was voted West Ham’s Player of the Year last season and is considered as one of the best young players in England.

Frank Lampard is a big fan of the England international, who he sees as a long-term solution to Chelsea’s problems at the back and wants to sign him to play as a centre-back at Stamford Bridge.

A former Blues academy player, Declan Rice joined West Ham’s academy in 2013 and Chelsea are desperate to take him back to west London.

However, Rice has four years left on his contract with West Ham and the Hammers are under no financial pressure to sell him this summer. David Moyes has already claimed that Rice will stay next season and is in line to become the next club captain after Mark Noble.

The West Ham manager also insisted that it would require ‘bank of England money’ to snare Rice away from the Olympic Stadium this summer.

West Ham are confident that they will be able to keep the 21-year-old at the club next season and for the moment, Rice has not pushed for a transfer yet.

What are Chelsea’s options regarding Declan Rice?

Declan Rice is clearly a priority signing for Chelsea and tentative approaches of a swap deal involving Michy Batshuayi moving to the Olympic Stadium has been rejected out of hand by West Ham.

The only way the Hammers could change their stand on Rice if Chelsea come up with an offer they can’t refuse. The potential transfer fee could be anywhere between £80m to £100m to force West Ham’s hand in the Rice transfer saga.

Chelsea clearly do not want to spend that kind of money on the 21-year-old and there are doubts that after forking out transfer fees north of £200m this summer, whether they can afford to spend big on another signing.

Declan Rice is also not looking like a player who would look to force through a move at West Ham after coming through their academy and establishing himself in the first team.

With the player unlikely to throw a fit, Chelsea are likely to find it tricky to convince the Hammers to sell unless they decide to throw big money at the problem.

At 21, Rice is still young and while West Ham do not expect him to stay for life, the club believe he could still continue at the Olympic Stadium for another season or two before eventually joining one of the big clubs in the Premier League or even in Europe.

For the moment, West Ham hold all the trump cards and are under no pressure to accept the fate that they would have to sell Rice this summer.

Chelsea might have to wait another season or two before they can snare Declan Rice away from West Ham. The Hammers do not want to sell and Chelsea do not appear to have the funds left in their kitty to put in an offer that will force the issue.

Can Chelsea afford to wait for Declan Rice for one more season?

Chelsea needed to reinforce their defence this summer as they had the worst defensive record amongst the top ten clubs in the Premier League last season.

They have signed Thiago Silva on a free transfer and the 35-year-old defender will add some much-needed experience and leadership to Frank Lampard’s defence.

But there are question marks over whether the veteran has the legs to sustain a full Premier League campaign. Silva’s lack of pace is also an issue for the Chelsea manager as he likes to play a high defensive line.

Declan Rice’s arrival would solve a number of problems for Chelsea at the back. His years of playing in defensive midfield means he is good on the ball and has the pace to burn that would allow Chelsea to play their high-risk-high-reward style and on the front foot.

The 21-year-old could also become the mainstay in the Chelsea defence for a decade if he continues at his current rate of progress. But for the moment, he is not looking like joining the Blues this summer.

Thiago Silva has given some room to breathe in terms of defensive reinforcements and Chelsea are hoping that he could do a job for a year or two before they can bring in quality younger players in their backline.

The arrival of the Brazilian gives Chelsea the opportunity to wait for another year for Rice as for the moment, West Ham can demand the ‘Bank of England money’ as they are not under stress to sell him as the player himself is not pushing for the move.

Chelsea could still surprise many and get their spending north of the £300m figure and offer bonkers amount of money to convince West Ham to sell Declan Rice this summer.