Manchester United are interested in Dayot Upamecano and there are suggestions that RB Leipzig could sell if they receive a big fee for him this summer. 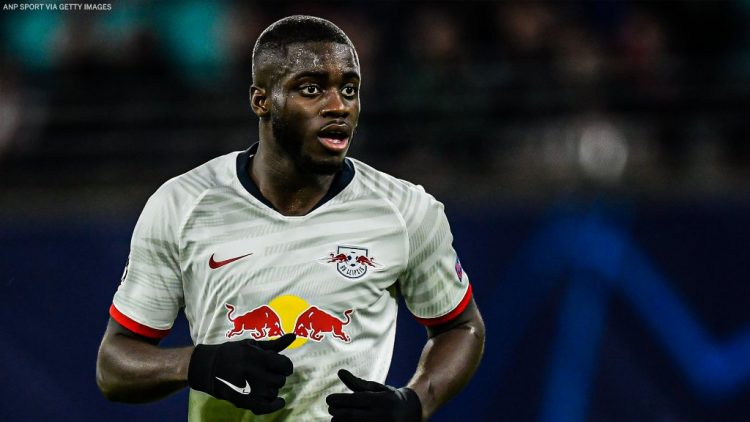 Dayot Upamecano signed a new three-year contract with RB Leipzig in July and it was considered that he would not be leaving the club this summer.

It was considered almost certain that he would be exiting next year when a new release clause of €42m comes into effect, and it was more or less thought to be a given that he would spend next season at Leipzig.

But rumours of an exit have not gone away and in recent weeks Leipzig indicated that despite the new contract, they could sell the defender if they receive a sizable offer on their table for him this summer.

News emerged on Tuesday that Manchester United have identified Dayot Upamecano as their number one defensive target and believe that a deal is there to be done to take him to Old Trafford this summer itself.

Ole Gunnar Solskjaer has prioritised signing a centre-back and the 21-year-old Frenchman is the defender the Manchester United manager wants in the ongoing transfer window.

Dayot Upamecano’s previous contract had a €60m release clause and he was widely expected to leave the club this summer before the COVID-19 pandemic changed the financial landscape of football.

The defender partly signed the new deal with Leipzig because there was a feeling no club would be prepared to spend €60m on him in a summer where everyone is trying to cut costs and penny-pinching as the financial ramifications of the pandemic continues to unfold.

The figure on the release clause was further reduced to €42m but it only comes into effect at the end of next season. But in Germany, there is a feeling that RB Leipzig would sell if the money is right this summer.

Manchester United have committed to spending €40m for Ajax’s Donny van de Beek and continue to remain interested in doing a deal for Jadon Sancho. But Solskjaer wants a centre-back and Dayot Upamecano is possibly the best young defender in European football at the moment.

His performances in the Champions League piqued the interest of several clubs and Manchester United are believed to be keen to get ahead of the competition.

He is available for a fee of €42m next year but more clubs are expected to be in the play for him next summer. Manchester United are in a unique position of not caring about getting outgunned by another big European club this summer due to the financial hit even the biggest names such as Barcelona and Real Madrid have had to deal with this year.

Leipzig would definitely want more than €42m if they have to sell Dayot Upamecano this summer. His new contract would mean scant little if Manchester United or any other club come up with an offer north of €50m for the centre-back.

The only thing Leipzig would have to take then is whether to take the extra money this summer or keep him at the club only to lose him for a lesser figure next year. They are a selling club and the German outfit are likely to take the more prudent financial decision.

The pot at Manchester United is not bottomless and Sancho remains the prime target this summer. Investing a fee north of €50m for a talented, but still young defender in Upamecano will take some deliberations between the club’s transfer team and the owners.

But Dayot Upamecano is 21 and exactly the right kind of age where Manchester United have not shied away from spending big in previous years. They committed a big fee to sign Anthony Martial from Monaco in 2015, two months after he signed a new contract with the Ligue 1 giants.

They have already committed €40m on 23-year-old Donny van de Beek and while not €120m, they are still keen to spend big on 20-year-old Jadon Sancho.

The 21-year-old French defender is a huge talent and this summer is providing Manchester United a unique situation where they could sign him without too many clubs trying to get him due to the pandemic induced market.

If they come up with the right kind of big offer, Dayot Upamecano’s new contract at Leipzig would mean little for the player or the German club.