Djokovic crosses the line, out of US Open for hitting official accidentally 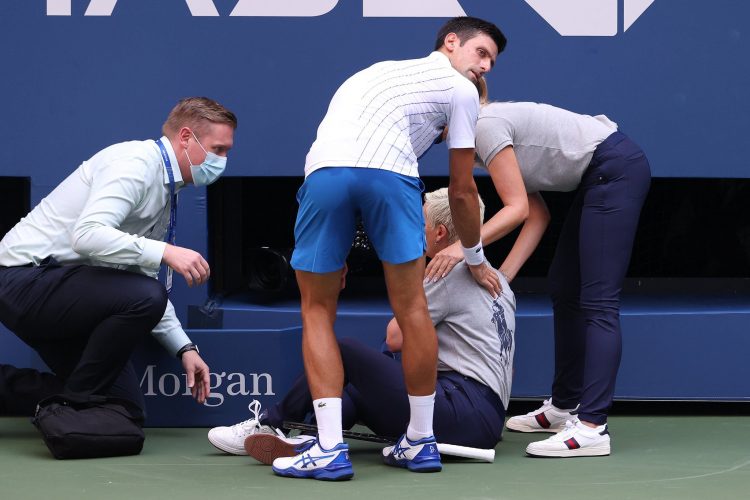 Djokovik will no longer take part in US Open 2020 after being disqualified for accidenally hitting a match official (Credits: Twitter)

It wasn’t tennis but a bizarre incident, a brain-fade moment if one may call it that, which hogged the headlines on Day 7 at the Flushing Meadows and put World No. 1 and title favourite Novak Djokovic out of the US Open.

In an incident seldom witnessed in a major, much less recorded in the annals of the game, the 17-time Slam champion was disqualified from the tournament for inadvertently hitting a line official with a tennis ball in a moment of fury. While tennis can testify to a certain John McEnroe ranting at the chair umpire on a disputed point or the infamous racquet-busting incidents involving Mark Roset, it had seldom seen a player taking out a line official, quite literally, with a shot in anger.

Two other incidents which beggar similarity with what happened at the Arthur Ashe are of Briton Tim Henman striking a ball girl accidentally in the ear during a men’s doubles game at Wimbledon in 1995 and being promptly disqualified and Argentine star David Nalbandian slamming an advertising hoarding into the shin of a line judge at the Queen’s Club event.

Weighing in on whether the officials were too harsh on the Serb for what was clearly an inadvertent mistake, Henman told Amazon Prime, “It’s the right decision. He is not aiming for a line judge, but has hit the ball away and you have to be responsible for your actions.”

There was a sequence of events leading up to the outburst. Failing to cash in on three set points during his fourth-round encounter with Spaniard Pablo Carreno Busta, the World No. 1 grew frustrated. He then suffered a fall, which darkened his mood even more. Having squandered three set points, with Busta on serve at 4-5 in the opening set, Djokovic lost the next game to be trailing 5-6.

That was the moment he lost it. Venting out his frustration at conceding a service break, the Serb slammed a ball reasonably hard only to see it catch a female line judge flush in the throat. As the judge went to ground screaming in pain, Djokovic rushed to her and apologised.

A Reuters report said even as officials were checking in on the injured line judge, tournament referee Soeren Friemel stepped out on court at the Arthur Ashe stadium and was seen in conversation with chair umpire Aurelie Tourte and Grand Slam supervisor Andreas Egli. They then had a long chat with the three-time US Open champion.

He tried putting forth his point that he didn’t intend to hurt the official. According to the Reuters report, the Serb was overheard saying “she doesn’t have to go to hospital for this”.

He tried arguing with the officials for 10 minutes, as Reuters said, before the officials went with the tournament rulebook and disqualified him from the event.

According to the Grand Slam rules, “The players shall not at any time physically abuse any official, opponent, spectator or other person within the precincts of the tournament site. The referee, in consultation with the Grand Slam chief of supervisors, may declare a default for either a single violation of this code.”

Sensing no amount of arguing or pleading was going to get him anywhere, the Serb was seen crossing over to the other side of the court and shaking hands with his utterly stunned and flummoxed opponent before he lifted his gear and trudged off the court. He skipped the customary press conference and drove off in a black Tesla, the Reuters report said.

He later posted a long apology note on Instagram. He said, “This whole situation has left me really sad and empty. I checked on the lines person and the tournament (officials) told me that thank God, she is feeling ok. I am extremely sorry to have caused her such stress. So unintended. So wrong. As for the disqualification, I need to go back within and work on my disappointment and turn this all into a lesson for my growth and evolution as a player and (a) human being. I apologise to the @usopen tournament and everyone associated for my behaviour.”

The United States Tennis Association released a statement in the light of the Serb’s disqualification, saying, he would lose all the ranking points accrued through his progress in the tournament and will fined the entire prize money – 250,000 US dollars – that he earned for reaching the fourth round.

The USTA statement said, “In accordance with the Grand Slam rulebook, following his actions of intentionally hitting a ball dangerously or recklessly within the court or hitting a ball with negligent disregard of the consequences, the US Open tournament referee defaulted Novak Djokovic from the 2020 US Open.”

Speaking to Eurosport, former US Open champion Mats Wilander said the officials took a correct call disqualifying Djokovic from the tournament. “You’re not allowed to do that. He hit it harder than he intended to, obviously a complete accident. It was a sign of frustration, yes. A little bit. But it doesn’t matter, you’re not allowed to do it.”

A favourite to land his 18th Slam title at the Meadows, the Serb, it appears, can do with a lesson or two on anger management.