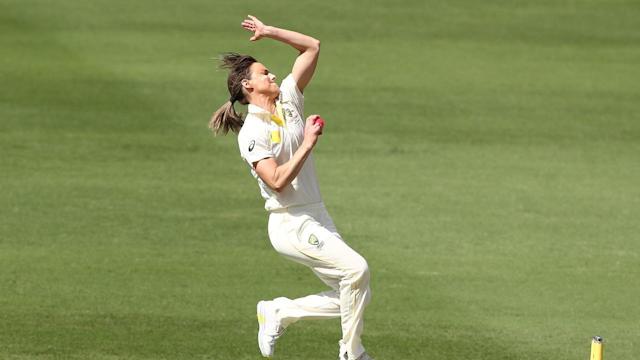 It might have been a drawn Test, but for Ellyse Perry, the Pink-Ball outing against India was a memorable moment.

In the pantheon of greats of the game, Ellyse Perry is a perfect candidate to be inducted into the ICC Hall of Fame.

Thus far, there are twenty nine Australians who form the ICC Hall of Fame, at present. Ellyse Perry, who’s won the decorated Rachael Heyhoe Flint award already, isn’t one of them.

But one reckons, time’s right for the famous Aussie to kangaroo leap into cricket’s most prized decoration.

Reasons there are many, but perhaps it makes sense to list out just one among them. For starters, Ellyse Perry recently became only the third bowler in women’s game’s all-time list to clock 300 dismissals.

Only the third woman after the ageless Jhulan Goswami and the tireless Katherine Brunt to have done so.

A feat no ordinary in achievement but extraordinarily inspiring in that Ellyse Perry has become the first Australian- male or female- to strike a triple century of dismissals.

Yet, knowing her penchant for all round athleticism and that instinct for domination, you cannot help but think that the Wahroonga-born cricketer wouldn’t make a huge deal about the world record achievement, distinguished that it may be.

Certainly, the soon-to-be 31-year-old’s mindset would’ve been a tad bit different had the drawn Test against India had gone in her team’s favour.

It was, nonetheless, another exhibition of quintessential “Pez-ness,” as one would call it.

The recent Test was historic in that for the first time ever did two of the mightiest cricketing sides in the women’s sport locked horns in a battle that featured the pink-not the red-ball.

Yet, Ellyse Perry, who’s been out for well over a year from the international game, stood out.

First, the right-arm medium pacer and watchful batter contributed with a fine 2 for 74 and later, that she remained unbeaten in both innings with the bat.

Her unbeaten 68 was just the third Test match fifty for the batter who also has to her credit a massive double century and that too, against the English, a knock that appeared during the peak of an Ashes series.

Had Perry not stuck to the crease for 285 minutes to compile her sixty eight, one doesn’t know what would’ve become of Australia, who somehow managed to put 241 on the board in front of a huge first-inning Indian score of 377, of which Mandhana alone accounted for 127 runs.

In a game that doesn’t rest much for mediocrity, contributing from both bat and ball is more than a stylised statement, it’s a signature of intent, one that’s nothing at the end of the day without execution.

An all-rounder who’s cultivated the image of a redoubtable athlete who’s ever willing to put herself on the line for the glory of Australia, Perry has been around for a long long time.

What strikes us often, as it should, are debates centred on when might the women’s IPL happen. Then there are some who waste no time whatsoever before offering moral lectures in the wake of comparing the current firmament of the women’s game to the menfolk.

What doesn’t strike us that often is the fact that Ellyse Perry has been serving Australia and in turn, making the sport a den of the driven since 2007.

You read that right.

Once just a teen age girl who burst on the international scene at Darwin, debuting under the great Karen Rolton, Ellyse Perry today is leading the charge of the next generation of Australian cricketers devoted to the cause of extending the country’s dominance over the sport.

Only her captain’s have changed, one inspirational leader in Rolton making way to the incredible Meg Lanning. What’s also changed perhaps is the greater frequency of white-ball games.

What hasn’t, however, is Ellyse Perry and her penchant for nagging pace and accuracy and the technically sound batting that oozes a sense of dependability.

The smile, very balanced and hoppy run-up as well as the ability to focus amid pressure and drive Australia to greatness is intact.

Superb news for Oz. Not the best, however, for Australia’s opponents.