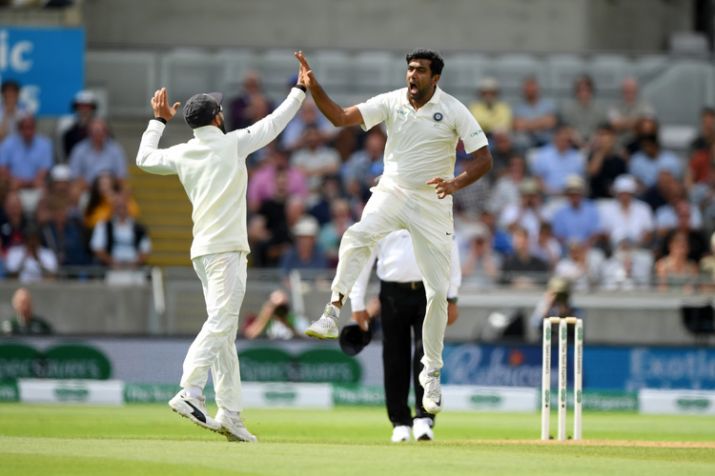 India started the Test series against England with a wave of optimism and fine artistry and the chief architect on a strong batting track was Ravichandran Ashwin.

The senior off-spinner bowled like a champion at Edgbaston on the opening day of the first Test. 4/60 set the tone up for Ashwin, as Virat Kohli-led Indian side came back to gain control of the proceedings.

England for a moment did all the hard work with Joe Root (80) and Jonny Bairstow (70) putting on a 104-run stand and seeing the side get to a commanding 216/3. England seemed to have made most of their decision to bat first. India needed a magic of moment from somewhere and in came skipper Kohli.

Root was on 80 when he and Jonny Bairstow opted for a second run, only for the 29-year-old’s direct hit to beat the dive of the England captain. From there, England lost four wickets for 27 runs and eventually limped to 285-9 at stumps on Day 1. Ashwin was the star of the show in forcing an English collapse.

A lot was said on whether Kuldeep Yadav would have started ahead of Ashwin for the Test. But experience often gives you directions in Test cricket. Ashwin’s top-notch mentality was helped by Kohli, who got the best out of the right-arm spinner at crucial junctures.

Ashwin ended the day needing one wicket in order to become the first Indian spinner to take a five-for on English soil since 2002.

With the Indian pace duo of Ishant Sharma and Umesh Yadav not quite having a great start, Kohli introduced Ashwin as early in the seventh over. Twitter went berserk with many fans questioning the skipper and his decision to get the spinner on with the new ball that early on the first day.

But the side was rewarded for Kohli being bold enough and sensing the history Ashwin and Cook share.

Cook was asked to drive the first two balls in the 9th over and in Ashwin’s 9th ball of the innings, he got the former England skipper. Ashwin bowled round the middle-stump and Cook’s front-foot defence was defeated by a perfect off-break. He got the essential drift from round the wicket before the ball turned and dislodged the off-bail.

Kohli got his decision spot-on and the ploy worked beautifully as Cook’s struggle in Tests continued. Once again England openers failed to impresses and they managed just 26 runs for the 1st wicket. When you look at the dismissal, this was by far the best piece of bowling from Day 1’s play.

Cook falls to Ashwin yet again

Kohli should be given the due credit here for putting his thinking cap on and letting Ashwin have a roll against the left-handers. Ashwin has a history with the left-handed batsmen in Test cricket. He got Cook for the eight time in his Test career.

It’s not limited only till there. When one looks at the most dismissals achieved by Ashwin in his career, three left-handers top the list. Australia’s David Warner (9), Cook (8) and another Aussie in Ed Cowan (7). That’s a total of 24 to his name. This is where he came out strong and set the tone for the rest of the day, especially in the third and final session.

Meanwhile, Cook himself has struggled against spin and besides Ashwin, he has got dismissed to Nathan Lyon 8 times and Ravindra Jadeja on 7 occasions.

It was a miserable passage of play for England in the hour after tea. Post Root’s dismissal, Bairstow and Jos Buttler departed in a blink of an eye. Ashwin grew in stature especially getting the in-form Buttler for a nought.

The right-hander was plumbed LBW after basically playing across a straight ball. It turned a little and went on to struck his knee roll. The celebrations said it all.

Then came in the domination against left-handers. Ben Stokes (20) offered a simple return catch with Ashwin’s ball holding its line and the extra bounce getting the better of the all-rounder. England pacer Stuart Broad, who is no mug with the bat, fell prey to a fuller delivery that beat his inside edge struck him on the right leg.

The senior pacer finished the day with three wickets against the left-handers. A sight that brings to the fore in why he will go in as the premier bowler for the remaining of the series.

Champion Ashwin the best in business

There is no doubt that when it comes to the red ball cricket, Ashwin’s learning and yearning to be the best in this format is quite the essential factor. County Cricket in England has done the spinner a world of good and he is ready to go the distance. Post the series against England, he will once again ply his trades for Worcestershire.

The big test for him a few years back was taking wickets outside the sub-continent. He had struggled in this department earlier. But he showed his craft against South Africa earlier this year.

The performance at Edgbaston will give him more confidence in going forward. India’s Test bowling needs consistency and Ashwin is the premium bowler who has looked a leader in the pack.

India is known for not starting well outside the subcontinent. But at Edgbaston, they have come out of the blocks beautifully. Ashwin has been in the game and he will play a decisive factor against the hosts, who have struggled off late in this format.