Eoin Morgan and Kane Williamson- divided by styles but united by a common purpose! 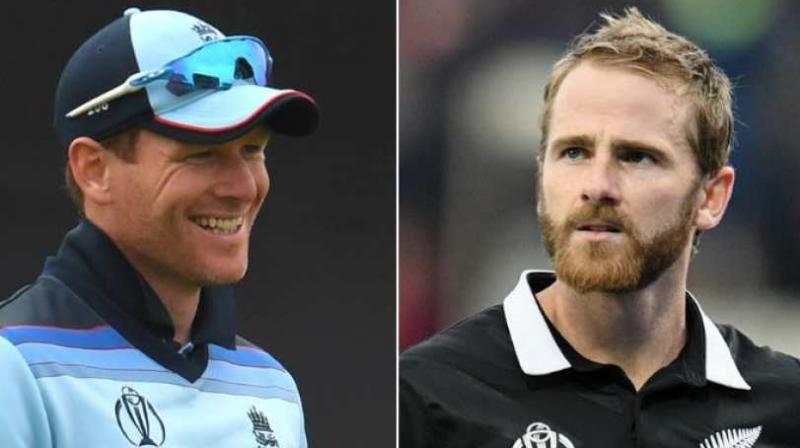 Nothing tastes sweeter than the taste of victory.

And just in a few hours from now, two exciting and dominant sides in world cricket shall be trying to taste just that at the spiritual home of world cricket: The Lord’s.

On the one hand are New Zealand, who haven’t had it any easy, have taken more games than any would’ve imagined into the final over, until the very dying moments. But keeping their cool whilst playing a brand of doggedly competitive cricket, New Zealand have had the last laugh whether against India or against West Indies.

In the ongoing world cup, they’ve been, as you might see, an extension of their captain’s cool and focused personality. Nothing flusters Kane Williamson, not yet a declared monk just as nothing offsets the concentration of Eoin Morgan who targets his prey akin to a sniper chasing with the last bullet in reserve.

On the other hand, England have hardly been disrupted in their quest to clinch the all-important glory: the Cricket World Cup. Apart from a minor twitch in the form of Sri Lanka that caught them off guard, nothing really has bothered Eoin Morgan and team.

But cricket is a game where you lead by example.

And that is why it makes so much sense that both Kane Williamson and now, Eoin Morgan are being considered such stellar successes as captains.

They’ve been among the runs, scored hundreds and fired boundaries and sixes at will.

While in Morgan’s case, you could say at least 4 batsmen if not more have constantly been scoring runs- Root, Roy, Bairstow, and Stokes- the captain has still found occasions to chip in with big contributions.

And when he’s found some, he’s devoured those who target England. A mere glimpse into the scorecards against India and Afghanistan would serve a mighty example.

But that said, it’s not been that easy for Williamson, who’s clearly been the wolf among the sheep in a side where neither Martin Guptill or Colin Munro- dropped for the semis- have played a part nor has the experience of Ross Taylor made significant difference, unless one were to turn a blind eye on the right-hander’s vital but draining fifty against India.

Williamson and Morgan-united by a common goal- divided by approaches

Williamson has been doing much of the scoring for his side and single-handedly so. Maybe, this absence of sizeable support from the other end has spurred the monk-like batsman to greater heights of concentration.

We saw that against the Windies, Proteas and even India, where Kane was able with the bat if not so with an eye for pure destruction.

And what may perhaps be the most important albeit understated narrative in terms of numbers is that Kane Williamson has, thus far, scored 30 percent of his team’s runs in the mother of all sporting battles.

Just how many would’ve such bulk of runs and their sheer percentage in wins against the mild-mannered bloke prior to the start?

His tally of 548 runs including 2 centuries puts him yards and miles ahead of the likes of Kohli, Gayle, Guptill, and Dhoni.

Eoin Morgan, on the other hand, has plundered not fired runs

Even as from the outset, the English captain with his Pokerface expressions and elegant mannerisms hardly looks the part of an attacking batsman, it doesn’t take him long to hang his opponents out to dry once he gets going.

While much of the focus in the world cup remained with his deputy Jos Buttler, it’s Eoin Morgan who’s darted runs and smoked the opponents into a hubris of despair.

While to his advantage he’s enjoyed a troika of stroke-makers in Roy, Bairstow, and Root, Eoin Morgan has been a bottle-rocket that’s only sought the skies once unleashed.

This is clearly understood by his accumulations thus far: 363 runs from 10 games. Not too bad for a number 6, ha?

Forget the mighty Gayle-storm, forget the Kohli-carnage. His high-backlift, the almost magnetic connection with the white ball and the on-side boundary and the ability to score at run-a-ball from the word go- all put Morgan in a distinguished league of modern-day marksmen.

What the Irishman displayed against Afghanistan was a testimony to his savagery.

Not once had international cricket seen a single batsman fire 17 sixes in a single game.

And now that record stands pretty with the belligerent batsman, someone who made Rashid Khan’s effort read 9 overs for 110.

So come Sunday, we shall see two distinguished batsmen- one a top-order man with a tall order of runs against him and the other, a destructor down the lower order- square against one another for a grand occasion.

And it’s only graceful that Eoin Morgan- closing in on 7000 runs- has maintained ardently that New Zealand won’t be too easy to beat. So what are your thoughts on that one, Kane?