Every IPL Orange Cap Winner In 12 Years Of IPL History

Chris Gayle is the only batsman who has won the Orange Cap on two consecutive occasions. 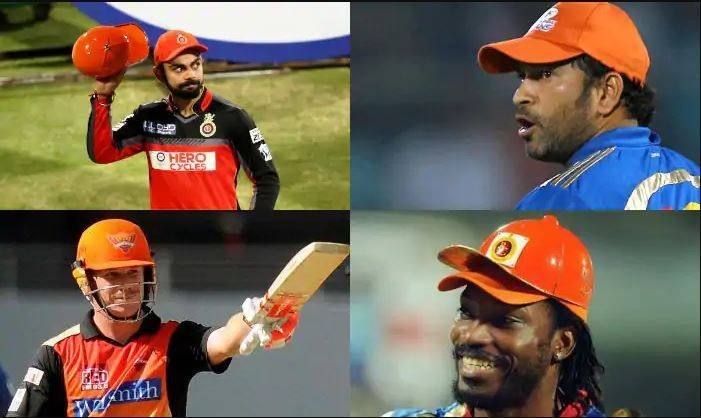 As many as 9 players have won the orange cap in IPL history.

The Orange Cap is a coveted award given to the batsman who has scored the most runs in a season of the cash rich Indian Premier League.

In the 12 seasons of the IPL, several batsmen have captivated the crowd with some riveting performances with the willow and won the award. As many as nine batsmen have won the orange cap, with David Warner winning the award thrice.

If Chris Gayle powered his way to the top with some brutal stroke play, Virat Kohli enthralled the crowd by following the text book with precision.

If David Warner was consistency personified, Sachin Tendulkar caressed the ball and toyed with the opposition bowling attack. In this article, let us look at the Every Orange Cap winners in all the 12 editions of the Indian Premier League.

The 2008 IPL season will be remembered for the way Shane Warne inspired a young bunch of cricketers from the Rajasthan Royals to lift the IPL trophy and also for the blistering 158 that Brendon McCullum scored in the first ever match of the IPL.

But then, Shaun Marsh weaved magic with the willow with some blistering performances for Kings XI Punjab and his performances in the first edition of the IPL will not be forgotten easily. The Australian scored 613 runs to help his side reach the semi-final stage of the tournament.

The stylish left hander averaged 68.44 in the tournament and also scored 4 fifties and a century to bag the orange cap in the first edition of the tournament. Marsh’s only century of the season came against the Rajasthan Royals. In a riveting knock consisting of 11 fours and 7 sixes, Marsh flattened the opposition bowling attack combining power with elegance.

The 2009 season belonged to the legendary Matthew Hayden. Even after retiring from the international arena, Hayden weaved magic with the bat for the Chennai Super Kings. The bulky Australian opener scored 572 runs for the CSK outfit, and played a crucial role in the side reaching the semi-final stage of the event.

Hayden scored 5 fifties in the competition, and thwarted several bowling attacks with disdain. The stand out knock that he played in that season was a whirlwind 89 that he smashed against Kings XI Punjab, enabling the ‘Men in Yellow’ to beat their opposition by 12 runs.

Hayden retired from IPL cricket after the 2010 edition.

He was into his 22nd year in international cricket, but Sachin Tendulkar deluded all of us into believing that the passage of time was just an illusion. The master batsman was in scintillating form during the 2010 edition of the IPL, and scored 618 runs to become the first Indian cricketer to win the orange cap in IPL cricket.

Tendulkar scored 5 fifties during the season, and gave excellent starts for the Mumbai Indians at the top of the order. His stand out knock of the season was a classic 89* that he conjured against the Rajasthan Royals, and his knock enabled the Mumbai outfit to romp home comfortably by 37 runs. Tendulkar added another feather to his already glittering cap and became the first Indian batsman to win the orange cap in IPL cricket.

The 2011 season belonged to West Indies batting legend Chris Gayle. The Big Jamaican tore apart several bowling attacks at the top of the order and blasted his way to 608 runs in the 4th edition of the IPL. Gayle scored his runs at a whopping strike rate of 183.13. Gayle started the tournament in riveting fashion by smashing a sensational 102* and sent the Kolkata Knight Riders to the cleaners.

He also blasted a magical 109 against the Kings XI Punjab side off just 49 deliveries to help Bangalore wallop the opposition by a margin of 85 runs. He then pummelled his way to an exhilarating 89 against the Mumbai Indians off just 47 balls in the second qualifier of the 2011 edition. However in the final, Gayle scored a duck and the Bangalore outfit finished as the runner up in the 2011 edition.

In 2012, Chris Gayle went one step further and became the first batsman to score more than 700 runs in a single IPL edition. The RCB opener blasted 733 runs in the fifth edition of the league and set the tournament ablaze with the willow in hand. Gayle scored 7 fifties and a century in the tournament, to win the orange cap for the second consecutive year in a row.

Gayle’s only century of the tournament came against the Delhi Daredevils. His whirlwind century, scored off just 62 balls propelled his side to a gargantuan total of 215, and helped his side to beat the Delhi outfit by 21 runs.

In the 2013 edition of the IPL, the Chennai Super Kings finished as the runners up, and one man who played a crucial role for the side at the top of the order was Mr. Cricket, Michael Hussey. The Australian scored 733 runs during the tournament to win the Orange Cap in the 6th edition of the IPL. The Aussie combined caution and aggression with ease, scored six fifties during the tournament and pulverised bowling attacks with methodical brilliance.

Hussey’s highest score of the edition came against the Kolkata Knight Riders. He blasted a stunning 95 to help his side overcome the opposition by a margin of 14 runs. Hussey also scored a magical 86* in the first qualifier against the Mumbai Indians and helped the Chennai outfit to beat the Mumbai side by 48 runs.

In the 2014 edition, Robin Uthappa played a crucial role in Kolkata Knight Riders winning the trophy with some scintillating performances with the willow. The right hander scored 660 runs in the 7th edition of the IPL at an average of 44.00, including 5 half centuries.

Uthappa’s best knock of the tournament was the 83* he scored against the Royal Challengers Bangalore. His knock, comprising of 10 fours and a six enabled the Knight Riders to beat the Bangalore outfit by a margin of 30 runs. Uthappa still continues to remain an integral part of the Kolkata Knight Riders side till today.

In the 2015 edition of the IPL, Australian batting Superstar David Warner pulverised several bowling attacks and scored 562 runs at an average of 43.23. The diminutive batting dynamite scored his runs at a strike rate of 156.55, and gave blistering starts for his side at the top of the order.

His standout knock of the tournament was a quick-fire 91* that he scored against the Kolkata Knight Riders in Hyderabad. His knock helped his side to edge past the Kolkata outfit by 16 runs. Apart from that, Warner also decimated the Punjab bowling attack on his way to a classy 81. His knock, studded with 6 fours and 5 sixes, helped his side to beat the opposition by a slender margin of 5 runs.

There comes a time when a sportsman traverses peaks that are inaccessible to the lesser mortals of the Sport and a time when every challenge is thwarted away with nonchalance. Indian batting maestro Virat Kohli would have experienced something similar during the 2016 edition of the IPL. The RCB skipper scored a gargantuan 973 runs during the tournament, and scored a staggering 4 hundreds in the 9th edition of the IPL.

In fact, till date he is the only batsman to have scored over 900 runs in a single IPL edition. Kohli scored his first hundred of the season against the Gujarat Lions. In a 63 ball classic, Kohli toyed with the Gujarat bowling attack to help his side post 180 runs on the board. His second hundred of the season came against the Rising Pune SuperGiants side. Kohli pummelled his way to a match winning 108* off just 58 balls and took the Pune bowling attack to the cleaners.

The master batsman scored his third hundred of the season against the Gujarat Lions. Kohli joined forces with the legendary AB De Villiers and the two batsmen smashed the Gujarat bowling attack to a pulp and helped their side post 248 runs on the board. His final hundred of the season came against the Kings XI Punjab side. His 113 came off just 50 balls and helped the Bangalore side thrash the opposition by a margin of 82 runs.

The diminutive David Warner features for the second time in the list. In the 2017 edition of the tournament, the Australian batting dynamite scored 641 runs for the Sun Risers Hyderabad at a whopping strike rate of 141.81. Warner scored 4 fifties and a century during the tournament, and provided solid starts for his side at the top of the order.

His only century of the season came against the Kolkata Knight Riders. In a 59 ball classic, Warner scored 126 runs to help his side wallop the Knight Riders by 48 runs. Warner also scored a blistering 76* against the Gujarat Lions. Warner’s innings was studded with 6 fours and 4 sixes and enabled the Sun Risers Hyderabad to romp home with nine wickets in hand.

Kane Williamson represents a monk in the ever changing and dynamic world of T20 cricket. The Kiwi batsman has a cool head, follows the textbook and scores his runs in a sedate fashion. In the 2018 edition of the IPL, Williamson scored 735 runs to stamp his authority. The right hander scored 8 fifties during the 2018 edition, and averaged 52.50 in the 11th edition of the IPL.

Williamson’s stand out performance came against the mighty Chennai Super Kings in Hyderabad. Opening the batting, Williamson anchored the innings and scored 84 off just 51 balls. However, his effort went in vain as the Chennai outfit beat the Sun Risers by a margin of just 4 runs.

In the 2019 edition, David Warner once again topped the batting charts for the third time. The Australian batsman was in blistering form throughout the season, and finished with an aggregate of 692 runs for the season. The SRH opener scored 8 fifties and a century during the tournament.

Warner scored his only hundred of the season against the Royal Challengers Bangalore. In a batting masterclass, Warner put on 185 runs for the first wicket with Jonny Bairstow and played a key role in helping his side pummel the opposition by a gargantuan margin of 118 runs. Warner also scored a classy 81 in his side’s final league match of the season. His innings was studded with 7 fours and 2 sixes and helped his side to thrash the opposition by a margin of 45 runs.

So, there you have it. These are the nine batsmen who have won the orange cap across the 12 editions of the IPL.

Sai Siddhharth is a person who views Sport as a window to express his thoughts to the outside world. He has been a sporting buff for the last two decades, and believes in the maxim "If cricket is my religion, Sachin is my God."