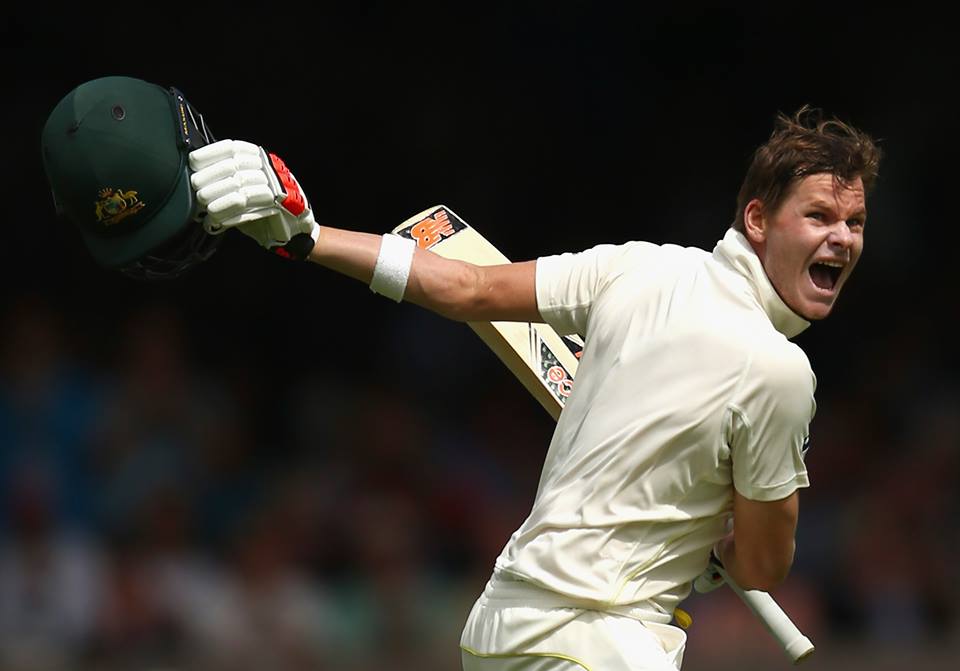 Australian skipper Steve Smith has brought in comparisons with the legendary cricketer of all time, Sir Donald Bradman after smashing a scintillating 229* against England in the ongoing 3rd Test of the Ashes series. What brings the top class Test batsman to reach the summit and get fans and pundits across in awe of his superiority, also resembles the way he has led his side just like Indian counterpart Virat Kohli.

Smith notched up his 22nd Test ton to gain ground among the so called ‘Fab Four’ batsmen of modern day cricket and alongside Kohli, he has assured one and all the gap the duo possess from everybody else in the cricket fraternity. Not many will reach the heights these two players have set and the Aussie skipper once again portrayed why he is the man to get to so many centuries and make the game of his own.

Smith was a fantastic at the WACA Perth, against England who are already 2-0 down and are on the brink of an Ashes series defeat that could also see a whitewash on cards. Smith’s decision making and precision to snatch away the momentum from their opponents from Day 2 onward, was a stellar effort. Smith’s aggression in Test cricket as a leader is a laudable effort and in the moment there is no stopping the man who has been a valiant warrior.

His innings of an unbeaten 229 was one of the best batting performances in recent seasons and one of the best ever in Ashes history. Smith never gave anything away and went on to build a 301-run partnership with Mitchell Marsh as he kept rotating the strike and played in a familiar tempo throughout. After a fighting hundred in the first Test at the Gabba where the conditions were different, Smith saw his way through to mark his fastest ever ton in the longest format of the game.

His 229* was his highest ever Test score and his 2nd double ton in a glittering career that has seen numerous match-winning innings. At Perth too, he gave his side the upper hand as they are on brink of a special series victory. But with two more Tests in offer, Smith is not done yet.

With Kohli being regarded as the world’s most complete batsman in the moment after his prowess in all three formats, Smith can arguably be considered as the best Test player. Both the players have imminent hunger and room for so many runs under their belly, that it is hard to stop them in making inroads against oppositions. Being said that the appetite they have in Tests is a dreamy affair.

The 28-year-old Smith has 22 Test hundreds in his name, two more than Kohli. These two greats have a similar sort of approach to bat for long periods and never going into a nutshell. Kohli amassed three centuries against Sri Lanka in the recently concluded Test series with two double tons in that and Smith has replied with the similar intent in the planet’s most significant battle – The Ashes.

Smith and Kohli share the top two spots in the ICC Test Rankings with Smith having a better Test average with 62.89. At the WACA, Smith battled everything at ease no matter what the England bowlers threw at him. There was no nerves of surrender and he owned the 22 yards while batting and came out on top. This innings saw him get past the 1000-run mark in Tests this year, for the fourth calendar year in a row. Interestingly, Kohli is the only one other man to do that.

The Australian skipper is averaging more than 200 in the series and with two unbeaten tons to his name, he has won the Ashes for his country. Former Australian stalwarts Michael Slater and Mark Taylor praised Smith and felt he is the smartest Test player around. Social media went berserk as cricketers around the world too noted the sublime innings and were in awe of the world’s best Test player.

Smith has mastered the art of batting on pitches that suit batsmen and although there have been eyebrows raised with his application against the moving ball, he has conquered more to let a small concern come his way. Smith is on the verge of delivering an Ashes glory for Australia and there will be much in store when he comes out to bat next and also lead the field to set his aggression in a positive manner.