Fernando Alonso has been rewarded for his bold and brave driving style by Alpine who want him for 2022. 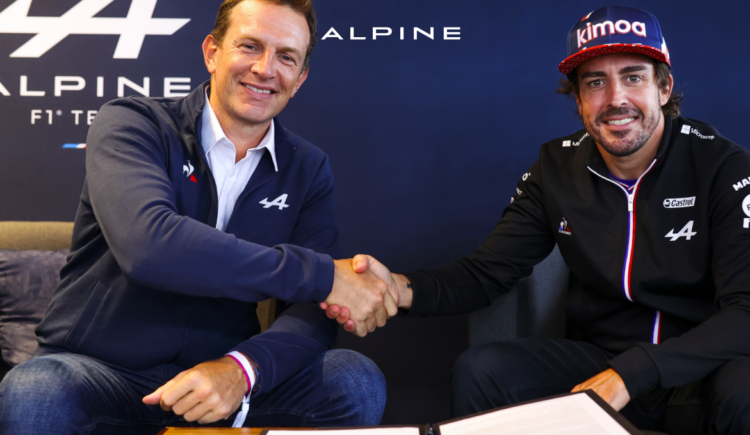 To some, he is El Nino. To most others, he’s the Spanish Samurai. But to the entirety of the Formula 1 grid, Fernando Alonso the same manic force of nature whose defences are hard to breach and whose relentless pursuit of cars, even stronger than his own, is responsible for making Formula 1 a massive spectacle. Regardless of monikers, Formula 1 is a place that appears more interesting than usual for it’s the platform where Fernando Alonso excels.

And excel he shall, even in 2022, as the contract of the Oviedo-born driver has been confirmed for the next season, one where the sport shall undergo giant changes, conceived to make it a level-playing field for everyone.

The news comes right ahead of the 2021 Belgium Grand Prix, home to the race that’s the longest on the current calendar besides being as beautiful as it is daunting.

Should the confirmation that the next 365 days (after the completion of the ongoing season) will now seem more settled make Fernando Alonso an even dangerous opponent?

Well, there are drivers whose mind space is dictated by on track incidents and the question in the realm of the ‘what might!’

And then there are the likes of Fernando Alonso who continue persisting, unaffected by events on track and off it.

How’s 2021 been for Fernando Alonso from the 11 races held thus far?

In a season where much of the discussion has been about the famous Max Verstappen versus Lewis Hamilton rivalry, a battle that has birthed a new chapter in Grand Prix racing, it’s Fernando Alonso who stands out, despite running a midfielder.

A car faster than the Alfa Romeos and Williams, slightly quicker than Aston Martin on pace and one can that can match up to a McLaren’s race-pace, Fernando Alonso, as seen in events like Azerbaijan and Les Castellet, already gave a hard time to the likes of Carlos Sainz Jr., Ferrari and Sebastian Vettel, Aston Martin.

At Austria, he was so relentless in pursuit of a solitary point, which he’d earn at the conclusion of the race nestled in the Styrian Alps, that he ended up feeling bad for George Russell, the Williams driver overtaken by the “Terminator” for a P10 finish.

Though, in theory and practicality, round#2 at Austria would see a titan of the track fall a position below his previous result at Spielberg, P9 at the Steiermark GP, Alonso, involved in a tussle with Russell, proved why one mustn’t underestimate any point in Grand Prix racing.

And why every single point counts.

Alonso’s best, however would come, at Hungary

It would read like a cliche to suggest Fernando Alonso always seems hungry to perform at Hungary, the venue of his first-ever race win as also his most latest F1 podium, circa 2014, what wouldn’t is stating mere facts- that, somehow, Hungaroring brings out the best in the man from Asturias.

From the onset of lap 55 until the conclusion of lap 65, Fernando Alonso would hold back none other than Lewis Hamilton for ten consecutive laps defending a Mercedes whilst racing in an Alpine with all his might.

There are things that drivers can do, then there are hair-raising results that only true legends of the sport can offer.

The magic of Fernando Alonso at Hungary

And whilst he missed out on a P3, what would’ve been his maiden podium finish this year by the barest of margins, Fernando Alonso would ultimately produce a stupendous result, courtesy a fighting fourth at the Hungaroring.

What many would remember, even to this day, is the infamous incident involving Neslon Piquet Jr. that went on to malign the Spaniard’s reputation, then with Renault. An incident the aggressive driver would wish would never have happened.

Yet, what most ought to remember, with the same curiosity, is that the last that Fernando Alonso set a fastest lap in a Formula 1 Grand Prix, would also occur on the very venue courtesy a ballsy 1:20: 182 during lap 69 of the 2017 Hungarian GP.

That’s the beauty of a driver and his relentless pursuits in a sport that certainly looked barren in his absence during 2019 and 2020 seasons; that he’s someone who can make a roar despite competing in an underwhelming machinery. Remember excelling in a McLaren whilst four years back in the day, the contest was all about the twin Ferraris of Vettel and Raikkonen.

But expressing his delight at competing for one more year- and who knows what stellar results might 2022 bring- the following is what “El Nino” would say in the wake of his new Alpine contract:

“I’m very happy to confirm the contract extension with Alpine F1 Team into 2022. I felt at home the moment I returned to this team and have been welcomed back with open arms. It is a pleasure to work again with some of the brightest minds in our sport at Enstone and Viry-Châtillon. It’s been a tricky season for everyone, but we’ve shown progress as a team and the result in Hungary serves as a good example of this progression. We’re targeting more positive memories for the rest of this season but also crucially from next year onwards with the new regulation changes coming into Formula 1. I have been a big supporter of the need for a level playing field and change in the sport and the 2022 season will be a great opportunity for that. I am looking forward to the rest of this year and racing alongside Esteban in 2022 for Alpine.”

The above told, what would be an incredible feat for the 40-year-old is whether he can conquer a hundredth F1 podium, currently sitting on a massive stack of 97 career podiums. It might look an outlandish expectation, but if there’s a driver that can do it- claim 3 more podiums to strike a century in F1- then it is none other than Fernando Alonso.