by Shreyasi Talukdar
in Analysis, Cricket, Did You Know, news, Uncategorized
3 min read
2 0
0 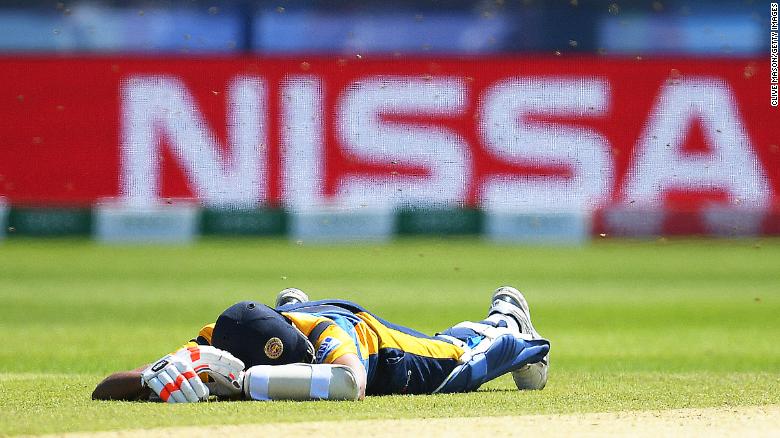 Sri Lanka vs South Africa match in the World Cup 2019 saw a swarm of bees attacking the ground to stop play for a while. This happened during the 48th over of Sri Lanka innings where they were crawling on 194/8. Suranga Lakmal (5*) and Isuru Udana (17) were on the crease facing a deadly Chris Morris. The pacer had already two wickets to his name in World Cup 2019 and was anxious for more.

Suddenly the bee attacked and stopped the play on the biggest stage of the game i.e at World Cup 2019 for a very short span. All the players were lying on the ground in front of the clueless spectators. But soon everything was back to normal to make things uneasy for the Lankans yet again. Sri Lanka ended with 203/10 in 49.3 overs.  South Africa pretty easily won the match eventually for the loss of one wicket.

But this wasn’t the first time that cricket has to be stopped for some bizarre reason. There are many instances like this in cricket history. Let’s recall some of the most interesting ones.

During World War II, a German fighter plane headed towards the Lord’s, the home of cricket. The ongoing game between Army and RAF was stopped. The players were on the ground and spectators were asked to remain under the stands.  According to the Wisden, it was the “first flying-bomb to menace Lord’s during the progress of the match.” And Wisden reported that it was finally dropped to Regent’s park.

It was during a Ranji Trophy match at the Palam Air Force Ground in 2017. Delhi and Uttar Pradesh were playing a Ranji match at the Palar Air Force Ground in 2017. There were some big names like Gautam Gambhir, Ishant Sharma, Rishabh Pant, and Suresh Raina. The third day of the game saw a car entering into the field despite all security at the Ranji Trophy Match. The designated personnel wasn’t at the gate which was directly connected to the main road. So the car entered the ground escaping security and even circled the pitch twice. Later the offender was handed over to the police by the security present at the ranji trophy match.

In 2011 a match between Hampshire and South Wells, a spectator suddenly spotted a ‘tiger’ from nowhere. Obviously, the match was stopped at Rose Bowl Nursery Ground in 2011. It was believed that there must be an escaped white tiger near Hedge End. Everyone was looking for a safe zone. The players were back to the dressing rooms. The security officers went for an investigation with a helicopter.  Finally, a toy tiger was found and play began after twenty minutes of much drama.

During 2017-18 Sheffield Shield New South Wales needed only 18 runs to win against Queensland at Brisbane. Suddenly the fire alarm in the stadium went off. The fire trucks arrived promptly to finally find out a burnt toast to be the reason behind the pandemonium.  Basically, Nathan Lyon overcooked his toast which resulted in the smoke and the alarms went off.

During a Castle Cup match Daryll Cullinan hit Roger Telemachus for a maximum, and the ball rested into a pan of fried calamari. The play was stopped for obvious reasons.  First, it took around ten minutes for the ball to cool down and then removing the grease and seafood from it was another irksome job. Later even it was difficult to grip the greasy ball. The Wisden wrote, ‘Fried calamari stopped play.’

As tweeted by ICC during the World Cup 2019 match between Sri Lanka and South Africa, “Bees two nations have a history!” A couple of years back the third one day between Sri Lanka’s tour South Africa was also stopped midway due to bee attack. The bees disrupted play twice on that day till the game was officially stopped during the 27th over. Interestingly even on that day, Sri Lanka were batting. Finally, a beekeeper has to be called to disperse the bees.