Georginio Wijnaldum: To sell or not to sell is the question for Liverpool

Liverpool are facing a tricky choice of whether to sell Georginio Wijnaldum or continue to try and negotiate a new contract with the midfielder. 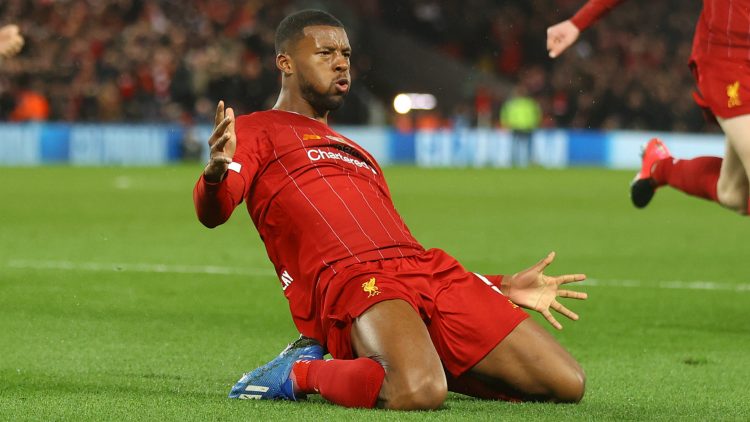 Liverpool manager Jurgen Klopp does not want to lose Georginio Wijnaldum but circumstances could force the issue. The Dutchman is in the final year of his contract and so far negotiations over a new deal are yet to bear any fruit.

With Barcelona interested in the 29-year-old midfielder, there is a real possibility that he might not be at Anfield next season.

The Premier League champions’ interest in Bayern Munich midfielder Thiago Alcantara is also tied with the speculation around Wijnaldum’s future. The Merseyside will be able to pay the €30m required to sign the Spaniard if they sell the Dutchman this summer.

The effect of the COVID-19 pandemic has affected Liverpool financially and they are unlikely to pay a significant transfer fee without selling a player or players.

But Georginio Wijnaldum has been pivotal to Liverpool’s success over the last two years and was a major player in their Champions League and Premier League winning teams. Jurgen Klopp could implicitly trust the midfielder to do a job and his consistency made him a valuable asset for Liverpool.

The reason Klopp remains desperate to keep Wijnaldum and hesitant over signing Thiago as he knows what the Dutchman can offer and he remains circumspect about what the Bayern Munich star could add to his squad.

Why Georginio Wijnaldum is a key figure in Liverpool’s success?

Liverpool agreed to pay a fee of £25m to Newcastle United to sign the midfielder in the summer of 2016 after the Magpies were relegated to the Championship. The Dutchman has been an unequivocal success at Anfield and has made 187 appearances for the club over the last four years.

Georginio Wijnaldum has been a colossal presence in Liverpool’s midfield and has been a vital cog in the way Jurgen Klopp wants his team to play football. The Liverpool manager had 10 central midfield options last season and the Netherlands international has played more games than any of them, both in the league and across all competitions.

His running stats exceeded anyone playing in his position last season in the Liverpool team, both in terms of total and average. He has been the engine in the Reds midfield and never seems to stop. He is consistent and dependable.

Georginio Wijnaldum is one of the first names on the Liverpool team-sheet for all the big games and has even come up with goals for the club. The Dutchman has been part of a plan that worked for Jurgen Klopp and selling him would be a big decision.

Klopp depends on the consistency of team selections and rarely looks to rotate his squad. He doesn’t have a midfielder of Wijnaldum’s quality in his squad and Thiago is not the same kind of player.

The 29-year-old’s consistency and his ability to remain fit for the majority of campaigns makes him a reliable player for Klopp. The Liverpool manager would have to rethink how his midfield would play if Wijnaldum is sold and Thiago arrives with a very different set of skills.

Plain and simple, if Georginio Wijnaldum doesn’t sign a new contract soon, he would be sold regardless of whether Liverpool sign Thiago or not. The club hierarchy still lament allowing Emre Can to run down his contract and leave on a free transfer.

The Reds do not want to make the same mistake, especially when Wijnaldum is likely to attract a sizable transfer fee.

Discussions over a new contract have taken place but they are yet to reach an agreement. Liverpool will also have to take into consideration that Georginio Wijnaldum will soon turn 30 and whether they should offer him a sizable contract at this stage of his career.

On the flip side, it is also likely to be the Dutchman’s last big contract and he is likely to look after his best interests.

Yet the clock on his Liverpool career is ticking. His contract is a tricky one to negotiate, primarily because of his age. Humphrey Nijman, his agent, is very aware of his client’s value and is determined to secure a deal that ensures this is reflected.

At 29, Wijnaldum is a leader in this team but will he still be in three years’ time? Liverpool’s economic model requires smart and decisive trading and Jurgen Klopp should be wary of the consequences if too many of his key players get old at once.

Liverpool captain Jordan Henderson turned 30 in June. Mohamed Salah and Sadio Mane will turn 29 next year. Roberto Firmino will be 29 in October. Next July, Van Dijk enters his thirties. Thiago will go the same way even before Liverpool’s record signing.

However, Georginio Wijnaldum’s endurance has been gold dust for Jurgen Klopp. Wijnaldum missed just one league game last season and has not featured in fewer than 33 games across any of the past four campaigns — making 141 league appearances in total (an average of 35 games).

On the other side, his perceived replacement Thiago’s appearances have been restricted over the same period. He has featured 94 times (average: 23.5). Since the summer of 2016.

Can Klopp trust Thiago to maintain his fitness levels and play the number of games he would like the Spaniard to play after he joins the club?

While the Bayern Munich midfielder could be more creative and add a different set of skills to the squad compared to Georginio Wijnaldum, there are no guarantees that he would be able to provide the Dutchman’s endurance.

It’s a decision Liverpool will have to make in the coming days.