Lewis Hamilton entered the mid-season break as the championship leader for the season ahead of Sebastian Vettel. The scenario remains similar as he will start the 2018 Belgian Grand Prix from pole position, ahead of second-placed Sebastian Vettel of Ferrari.
There may be pauses in the F1 season in the form of mid-season breaks. But, there are no pauses when it comes to dominating proceedings, especially when you are Lewis Hamilton.
Demonstrating just that, Hamilton conquered the qualifying and now seems bent on winning what might possibly be his fourth win at Belgium, a track where Ferrari’s Kimi Raikkonen has won on four previous occasions.
By resuming the 2018 season from where he’d left, having clinched the 2018 Hungarian Grand Prix earlier, it will take a lot of stopping from Ferrari or Red Bull to curb Hamilton at Spa Francorchamps as racing resumes after a gap of one full month. 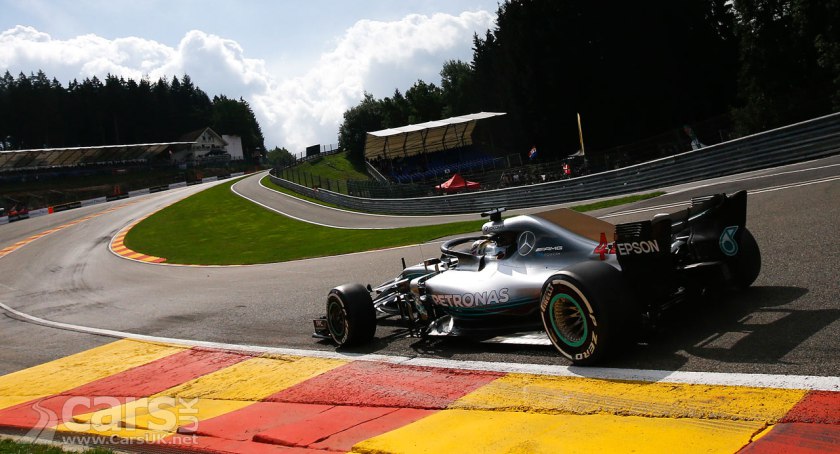 And that is exactly what it seems as the four-time world champion, gunning for a fifth crown this season, demonstrated familiar grit and pace to claim track position for the start of the 2018 Belgian Grand Prix at Spa Francorchamps.
Delivering an absolute master class at a damp Spa Francorchamps, matching pace with excellent control, Lewis Hamilton put Mercedes right on top at the all-important qualifying for the 2018 Belgian Grand Prix.
In doing so, Hamilton not only puts himself in an advantageous position amid tricky weather at a wet Spa Francorchamps, he’s also fired the opening salvo instead of arch-rival Sebastian Vettel’s Ferrari.
Known for unfurling massive race-pace often resulting into spectacular sights for the fan, of the kinds one saw between Hamilton and Vettel who went wheel-to-wheel last year at around Eau Rouge, there was no dearth to drama and thrill in a qualifying session dubbed ‘excruciating’ by Hamilton’s race engineer at Mercedes, given just how hard it was to grab pole under damp conditions.
There’s little surprise then that Spa Francorchamps’ pole-sitter himself proclaimed the Belgian pole as his best effort thus far in 2019.
To get an idea about how difficult it was to drive amid capricious weather here in the heart of Belgium’s Ardennes, it might be worthwhile to refer to a 2017 statistic.
Back in 2017 Belgian Grand Prix, Lewis Hamilton, also a pole-sitter for the last race registered a belter of a lap at Spa, going as fast as 1:42:553. This year, however, under showers, Hamilton in that dogged Silver Arrows, clocked a 1:58:179, the massive gap highlighting the onerous challenge Spa Francorchamps imposed on 20 of the world’s fastest men on the tarmac.

Superb from Ocon, Perez and Grosjean


But where a dry qualifying at one of Formula 1’s most iconic and quickest venues seemed completely out of hand, what wasn’t, however, was rather pleasantly surprising finishes from the likes of Esteban Ocon and Romain Grosjean.
In qualifying third, just behind Sebastian Vettel, French driver Esteban Ocon bagged his best-ever start to a Grand Prix, qualifying third, clocking a brilliant 2:01:851, followed closely by his teammate, Sergio Perez, who gathered a fighting fourth at 2:01:894.
Starting from fifth would be Haas driver Romain Grosjean, another driver who bagged his best start for 2018 going at 2:02:122, who was followed by the other Ferrari of Kimi Raikkonen, who could manage only a sixth-place finish. The two Red Bulls of Verstappen and Ricciardo were stacked on seventh and eighth, respectively, as Magnussen bagged ninth, followed by Bottas, who’ll resume his season after the bitter disappointment of Hungary, managing only tenth.

Not the best of starts for Ferrari upon F1’s resumption


But in conditions that changed rapidly having been only partially sunny at a few areas to being completely enveloped by dark clouds, Ferrari’s challenger to Hamilton, Vettel expressed disappointment with the qualifying result. He was of the view that the team did not manage the strategy well as Raikkonen too endured a disappointing start.
But as often seen in the past, Spa Francorchamps will be expected to throw open the challenge come Sunday.
Should it be a dry race, something that may not be true for the entirety of 44 laps, expectedly aiding cars based on better tyre management suiting superior race pace, we can expect a belter of a race.
One would expect a clean getaway as will drivers starting third, fourth and fifth, there being a lot at stake for the likes of Ocon, Perez and Grosjean, who, for a change will get a chance to forge a battle for the track position alongside regular leaders.
But whether we see a clean, accident-free start is something that only time can reveal. But that said, Spa Francorchamps will once again behold the hugely-exciting spectacle of seeing Vettel challenging Hamilton once again in what should ideally be a race for epic proportions. Hamilton’s last win here came in 2017, before which he gained useful triumphs in 2015 and 2010. That said, the likes of Ricciardo and Vettel have done well here, especially in the past few occasions, with the Red Bull driver having clinched a vital second in 2016, having won here previously in 2014. Vettel, on the other hand, has won at Spa on only two previous occasions, once in 2011 and then in 2013.

What to expect from the 2018 Belgian Grand Prix?

The likes of Alonso and Hulkenberg, beginning well outside the top ten will be expected to mount a serious charge, especially where their recent form stands. It’ll be interesting to see if Raikkonen can pull out a move or two and keep his Ferrari in contention for a valuable finish. Another podium for Kimi would mean the Finn garnering his hundredth, overall.
That said, it’s all to play for at Spa Francorchamps as the remainder of the 2018 F1 season has thrown open the climax for the familiar frontrunners on the grid.

Previous articleFormula One returns at Spa with a few interesting changes after the Summer Break
Next articleVirat Kohli Overtakes Dada; Tryst With Records Continue