Has Cricket been fair to Nathan Astle?

If you happen to sift past some decades of New Zealand batting with a keenness to observe their batsmen (slightly more than a cursory gaze), you’d find a link that unites different men from different eras.
When you time travel from the era of Martin Crowe- to the time of Mark Greatbatch- meander further into the era of Stephen Fleming- before you arrive in the ebb of contemporary power-hitting show dominated by Martin Guptill- you’d find most new New Zealander’s have been united by a common purpose: that of fiercely striking the ball.
It’s an aspect so implicit to their game that it beckons raising a question.
Have we been rather unkind to them- restricting their persona to a rather harmless looking Kiwi bird- when their marksmen, consistently across eras, have shown the appetite of destruction as possessed by an ostrich?

What Nathan Astle did for his team?


One’s well advised on not attempting certain acts. For instance, jumping into water infested by sharks. There’s little sense in stoking a kangaroo by constantly hopping in front of it. Likewise, it’s not a bright idea to intrude a free run of an ostrich.
Long before Guptill made headlines for striking his team’s only ODI double ton, before Williamson furthered his case for being one of the world’s best, and even before Munro opted for Cricket over Hockey, it wasn’t considered a wise idea to ball short at Nathan Astle. Nor was it any intelligent to bowl full at him.
Astle retired a decade and a half back, but not before striking 7000 ODI runs and collecting 27 hundreds. Perhaps, it’s both strange and uncanny on the part of the fan obsessing over numbers that Astle’s record- scoring Test cricket’s fastest double ton- is hardly remembered.
In an era where Mongoose bats didn’t exist and where a free-hit might possibly have meant a rare full toss to a batsman, not a game-changing rule incorporated to assist batsmen, there was a man who did what McCullum did until recently: beat the pulp out of the cricket ball.
And guess what, Astle didn’t even pop a gum or roll up those familiar sleeves to sport some forearms.
A time that was no stranger to unsung heroes: a marquee of talent restricted to Cricket’s version of the Bronze medal and not the savoury stuff like Gold- there were men like Chris Harris, Alec Stewart, Brian MacMillan, and Carl Hooper.  Astle, like them, seemed unflustered about the lack of attention he was given.
In fact, he seemed so unflustered whilst batting that it appeared he was more in a Pop concert where he seemed content hanging out instead of being on the pitch amid a live game.
What actually are specific regions on the off were for the ones bowling to Astle, torture chambers were obviously none wanted to hang out. 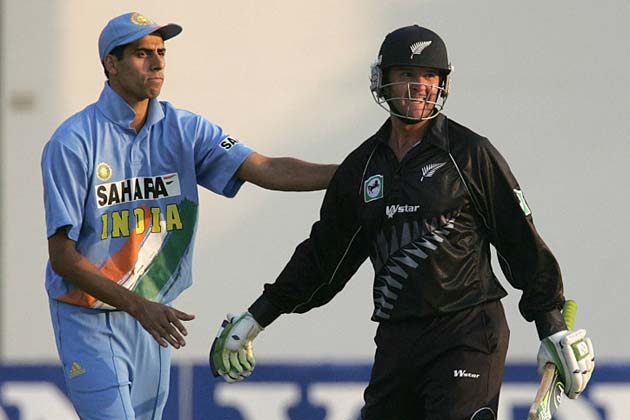 Nathan Astle made bowlers pay (Image: ICC Cricket Live)
Gough and Cork repeatedly offered him room. Walsh and Ambrose tried pestering him with short-pitched stuff and others just ran into him. Astle probably isn’t a batsman you’d find a book on and not a batsman you’d find any coach citing for possessing firm technique.
He resorted to the rasp cuts and the ballsy pulls and more often than not put his team’s run-rate to over 6 an over; a bonanza in those days.
Even before T20s came long, there seemed in one of New Zealand’s most underrated cricketers, a bloke who was doing Formula 1 in Cricket.


Probably he may never have tried even perfecting the forward defence. Yet, he wasn’t a pinch-hitter or a mindless carver of the ball. No one remembers Nathan Astle for playing the most graceful back foot defence. He merely seemed interested in going about his game uncomplicatedly, playing cricket as only he could: attacking.
But the past was quite a different era.
It was an era where cricket seemed less of a punk sport of switch hits and devious deliveries, the sport eschewing blue streaks, gold chains and yellow boots.
And it was during this age where Nathan Astle spiked adrenaline; offering the meat of the bat to anything that came in his range- square on the off to midwicket. And in so doing, he made his countrymen believe that higher strike rates were achievable in five-dayers.
He told his side that they too could score well from the word go and that these precious powers weren’t just limited to a Lanka powered by Jayasuriya or a West Indies donned by Haynes.
Through Astle’s exploits with the bat, New Zealand believed that a lot was achievable as long as they honestly expressed themselves. In 5 separate occasions in his career, did his average soar over 40, a mark of a ‘respectability’ for a Test bat in those days, where there was nothing like a free-hit.
That he wasn’t a mindless hitter of the ball can be conveyed by his successes against dominating teams of that era. In a Sachin, Dravid, Srinath, and Kumble powered India, he struck 5 of his 11 ODI tons.
In a sport that’s given its due share of Monikers, Sehwag celebrated despite being prefixed as a ‘butcher’, Hayden admired for his sheer ‘Haydos’ physicality, Kallis crowned as the Proteas’ own ‘Rock of Gibraltar’ – it’s baffling that Nathan Astle wasn’t anointed an alter ego.
But to a man who so enjoyed batting, often forgetting to exchange the glove-thump at the middle of an over having creamed one to the point boundary- it doesn’t occur that Astle is begrudged.

And maybe it’s a Kiwi thing: to offer restraint and escape theatrics.

What is sad though is that so little is he cited of him when one recounts the great New Zealand batsmen or when one debates that their batting has blossomed only in the McCullum and Williamson era.
And if one needed a proof about Nathan Astle being unsung- a man who struck hundreds against all nations save Sri Lanka and Bangladesh- then a finding out a simple fact suffices. How often is his name even mentioned on any list of men who could smash the ball effortlessly anywhere?
Elite names like Gayle, Afridi and Sehwag are mentioned with glee, but not Nathan Astle.

Previous articleFerrari no match for Mercedes as Hamilton takes pole for Singapore Grand Prix
Next articleAsia Cup 2018: Players To Watch out For In Continental Showpiece