Harry Maguire has had a better first season at Manchster United than most would give him credit for. But he might need a new partner to accentuate his strengths further. 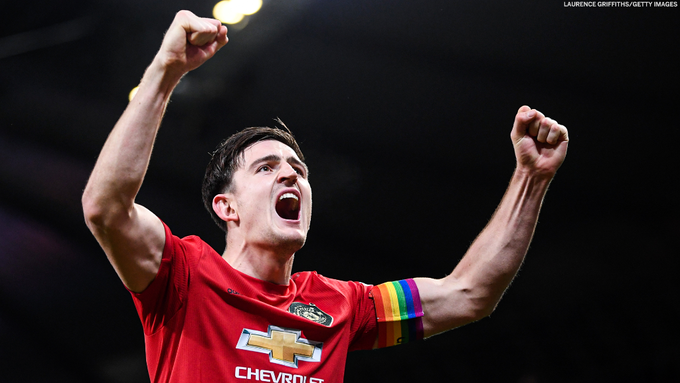 Harry Maguire has done well this season but does he need a new partner at the back? (Image Credits: Twitter)

Harry Maguire was Manchester United’s top target last summer and the club pushed the board to pay a record £80m fee for a defender to snare him away from Leicester City.

The money involved was eye-watering but Manchester United needed him following a poor season defensively and the worth of a player is as much as what a buying club want to pay for him.

The English defender will forever be condemned to get compared with Liverpool’s Virgil van Dijk, due to the transfer fee, and it is unfair as the Dutchman is arguably the best centre-back in the world right now.

However, despite all the criticism Harry Maguire has coped with, he remains one of the best centre-backs in the Premier League.

He has made a real impact on the pitch for Manchester United and no one questioned the decision when Ole Gunnar Solskjaer made him club captain following Ashely Young’s departure in January.

Like most players, he has weaknesses but some of them have been amplified and his strengths far outweigh the problems in his game.

Only one team in West Ham conceded more goals than Manchester United amongst the Premier League top ten in the 2018-19 season. Teams such as Crystal Palace and Newcastle United in the bottom half of the table conceded fewer goals than the Red Devils.

It was clear Manchester United needed a leader in central defence and a right-back.

Manchester United paid big money to bring in Harry Maguire and Aaron Wan-Bissaka and on the basis of the recently-concluded Premier League campaign, the moves have paid off.

The Old Trafford outfit finished third in the Premier League and only Liverpool and Manchester City conceded fewer goals than Manchester United in the English top flight. It is clear that Maguire has made a considerable impact in the team’s defence.

Manchester United also conceded fewer shots on their goal, which is a direct result of having a better centre-back pairing in Harry Maguire and Victor Lindelof. The Premier League giants also kept 13 clean sheets in the league, compared to seven last season.

The defensive statistics make it clear Manchester United have shown a remarkable improvement in their performances at the back and that is a direct result of having a leader like Maguire.

His fitness record that saw him play all the 38 league games, also provided some much-needed consistency at the back. Lindelof also missed only three Premier League games and the two defenders provided the required stability at the back.

It is a far cry from Manchester United chopping and changing at the back due to the poor injury records of Chris Smalling, Phil Jones, Eric Bailly and Marcos Rojo in previous seasons.

Harry Maguire has a lot going in his game – he is good in the air, he dominates the penalty box and wins most of his aerial duels. He also reads the game well and makes crucial interceptions. His passing ability is a key part of his arsenal and he often breaks the lines with his pick outs.

But his lack of pace is a glaring part of his game as well. He struggles when players run at him at pace and it often kind of pushes Manchester United five yards back when defending. He has also made a few highlight-reel worthy mistakes but has had far more good games at the back than bad ones this season.

Ole Gunnar Solskjaer wants to play a high-line and even though he doesn’t have a quick defender, he often takes the chance with Harry Maguire. Victor Lindelof is quicker than Maguire but he is not Rio Ferdinand when it comes to pace.

The Lindelof-Maguire axis has done well this season with the Swede having the remarkable stat of not getting dribbled past by a player even once in the 2019-20 Premier League.

But Harry Maguire needs someone more physical and quick beside him, who can work as a sweeper and mop up behind the English centre-back. It will allow Maguire to take those risks without worrying too much about a ball being played behind him with a quick attacker chasing it.

The best defensive partnerships were Yin and Yang. Rio Ferdinand was the Rolls Royce to Nemanja Vidic’s tank. Ricardo Carvalho was the sweeper and ballplayer beside John Terry’s aggressive defending style.

Maguire has a lot going for him and if he gets a suitable defensive partner beside him, his strengths will further come to the fore for Manchester United.

Will Manchester United spend big to bring in a new partner for Harry Maguire?

Manchester United are likely to spend big on Jadon Sancho and maybe another attacking midfielder this summer. Will it leave them with enough left in the tank to bring in another world-class centre-back? I am not sure.

Napoli’s Kalidou Koulibaly is their dream target. He is quick, aggressive and a leader at the back and will perfectly complement Harry Maguire. However, Napoli want around €90m and Manchester United are unlikely to spend big on a defender this summer.

Lille’s Gabriel is on their radar as well. He is also a quick and physical defender and at 22, he still can improve further in the future. Villarreal’s Pau Torres is also a target for Manchester United. The Spaniard is wonderful on the ball, quick and has the ability to break the lines in midfield by running with the ball.

Manchester United also have seven centre-backs on their books and if Phil Jones, Marcos Rojo and Chris Smalling are not moved out, a new defender won’t come in. There is also a chance that Smalling could be reintegrated back into the squad if a club do not meet Manchester United’s €20m asking price for him.

A lot will depend on whether Ole Gunnar Solskjaer believes he can get by another season without spending on a centre-back. Victor Lindelof and Harry Maguire were not perfect but they did better than most Manchester United centre-back pairings in recent years and formed the third-best defence in the league last season.

With Chris Smalling, Eric Bailly and Axel Tuanzebe in reserves, Manchester United should be more than well-stocked in centre-backs next season.

However, whatever happens in the transfer window, expect Harry Maguire to be in the starting eleven, if he is fit, when Manchester United take the pitch in their first Premier League game of the 2020-21 campaign.