Frank Lampard did more than enough to get passing marks as Chelsea manager last season but following a summer of spending, the pressure and expectations will be amplified for next season. 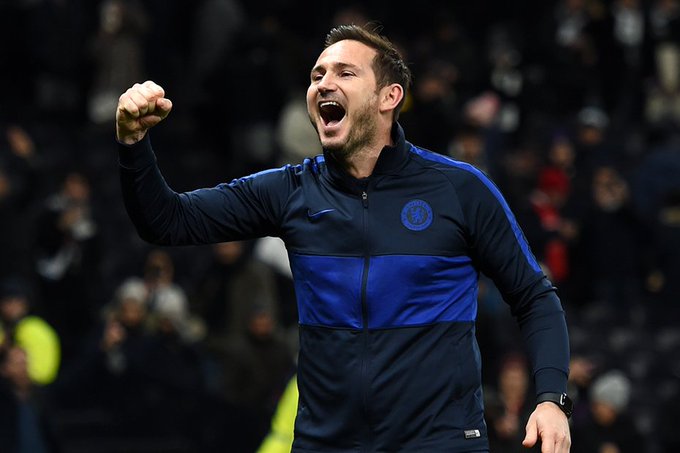 Frank Lampard did his job last term but next season will arrive with increased expectations. (Image Credits: Twitter)

If Frank Lampard was not a great former Chelsea player he likely would not have been considered for the manager’s job after just one season at Derby County, where he failed to earn them promotion back to the Premier League.

Frank Lampard’s appointment was a free hit for Chelsea. With the club banned from signing players last season, the west London outfit took a punt on the 42-year-old managerial greenhorn.

The former midfielder was tasked with the job of integrating academy graduates to the first team squad but that policy was unlikely to be implemented had they not been banned from the transfer market.

A fourth-place finish and an FA Cup final was a solid first season for Frank Lampard at Chelsea but there were issues that the former Blue failed to solve throughout the campaign.

The scrutiny on him will be much harsher in the 2020-21 campaign, especially after the club spent big in the market to reinforce the squad. Just top four might not be enough for him to save his job next year, given Chelsea’s penchant for sacking managers.

Promoting youth from within Chelsea

With the transfer ban in place, Frank Lampard was almost forced to place his trust on the young players coming through the academy. Tammy Abraham was preferred over Olivier Giroud in the first half of the season and Mason Mount came into his own as a creative hub in the Chelsea midfield.

The highly-rated Reece James also got a number of opportunities in the first team and even played the FA Cup final at the end of the season. Fikayo Tomori played a number of games at the heart of the Chelsea defence but was sidelined in the second half of the season.

Young players were given the opportunities to shine and Frank Lampard didn’t shirk away from blooding youth into his squad. But as the top four race got tighter towards the second half of the season, the Chelsea manager became more conservative and the average age of his starting eleven rose.

Tammy Abraham made just two starts in the last nine league games despite scoring 15 times in the Premier League. Olivier Giroud was preferred and the Frenchman’s form meant that the younger forward barely got a sniff towards the end of the season.

He played a paltry 12 minutes at the end of an FA Cup final where Chelsea were chasing the game.

With the arrival of Timo Werner, it is hard to see how many Abraham plays next season if Giroud still stays at the club beyond the end of the summer transfer window.

Chelsea shipped in 54 goals in the Premier League, the highest amongst the teams who finished in the top ten last season. Even Crystal Palace, who finished 14th in the league table, conceded four goals less than Frank Lampard’s side.

Lampard’s defence was the visible weak link of his Chelsea side and time and again they conceded poor goals from set-pieces and the lack of organisation was apparent throughout the campaign.

Part of the problem was the defenders available to the Chelsea manager. Antonio Rudiger was out until December and therefore, Frank Lampard tried various centre-back combinations amongst Kurt Zouma, Andreas Christensen and Fikayo Tomori but the Chelsea manager never settled on one.

Rudiger’s return from injury saw him play most of the games but even he struggled due to the absence of a settled partner at the heart of the Chelsea defence.

The left-back position was a massive issue for Chelsea as well. Marcos Alonso is a brilliant attacking full-back but has become a liability when asked to defend. Emerson Palmieri is of the same ilk.

It is no surprise that Lampard wants a new left-back this summer as the options he has in the squad are mostly defensive disasters waiting to happen.

The shift to a back three towards the end of the season was more to hide the problems in left-back and central defence than any grand part of a masterplan.

Their defensive frailties were exposed and taken full advantage of by a frighteningly good Bayern Munich side over two legs in the Champions League.

Chelsea needed defenders but so far, they have spent big on a winger and a striker and are likely to fork out €90m for an attacking midfielder in Kai Havertz. It leaves many to speculate on how much Lampard would have left to spend on defenders.

Leicester City’s Ben Chilwell is a target but the Foxes want Harry Maguire-level money for him. The Blues need one if not two centre-backs and are aching for a leader in the back four. But will he have the budget to spend on an absolutely top draw central defender this summer?

Frank Lampard was let down by his number one goalkeeper

Chelsea paid a world-record fee for a goalkeeper to sign Kepa Arrizabalaga from Athletic Bilbao two years back. It now seems one of the worst pieces of business the club have done in recent years.

In every goalkeeping metric, Kepa was either at the foot or towards the bottom of the table last season. His performances declined to a point where the Chelsea defence had no trust in the man between the sticks.

Frank Lampard finally lost patience and he was dropped to the bench on the last day of the season. The Spaniard also didn’t feature in the starting eleven in the FA Cup final. Willy Caballero, a second choice goalkeeper for life, was preferred over the 25-year-old.

The Chelsea manager wants a new goalkeeper in the summer but that could only happen if they can shift Kepa out. But in a depressed market, it is hard to see which club would be ready to sign the Spaniard who faltered badly last season.

Chelsea also do no like to sell players for a loss but expecting any club to spend any sort of significant fee on Kepa next season would be overly optimistic.

Chelsea have spent significant sums into their squad already and will invest more in the coming weeks. Kai Havertz, a left-back and at least one central-defence are expected to arrive before the window closes in October.

The pressure and expectations on Frank Lampard will be much higher and finishing in the top four would be the bare minimum requirement.

Following their spending spree, some in the Chelsea board could even expect a title challenge next season and do better than exiting the Champions League in the Round of 16.

But are Chelsea anywhere close to Liverpool or Manchester City despite the spending? Don’t think so. Are they good enough to live with the best in Europe? They do not seem like.

The reasonable expectation on Frank Lampard would be to try and close the gap with the top two, a top-four finish, winning one of the domestic cups and show some progress in the Champions League.

But previous Chelsea managers have been sacked for doing better than that. The cause of trepidation for Frank Lampard would be that for all the talk of trusting a young manager, Chelsea remain a trigger-happy club and names such as Massimiliano Allegri and Mauricio Pochettino are available.