The coronavirus pandemic might force bowlers in cricket to not use saliva to shine the ball and this will present a massive disadvantage for them. 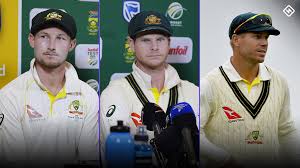 Steve Smith, Cameron Bancroft and David Warner were all handed lengthy bans during the ball-tampering saga in Newlands against South Africa in 2018. (Image credit: Google collage)

In cricket, the issue of ball-tampering has been a hot potato for many decades. In the early 90s, Pakistan’s bowlers fell foul to ball-tampering allegations.

South Africa’s Faf du Plessis was caught twice in 2013 and 2016. Rahul Dravid was caught in 2004 and Sachin Tendulkar was accused of committing this crime in the Port Elizabeth Test in 2001 against the Proteas.

Michael Atherton, the former England captain, tried this in 1994 by using mud from his pocket. In 2018, when Steve Smith, Cameron Bancroft and David Warner all admitted to tampering the ball using sandpaper in the Newlands Test against South Africa, the seriousness of the whole issue came forth in a big way.

Now, the ball-tampering issue might assume a different dimension altogether in the post-covid-19 pandemic world. Traditionally, bowlers have used saliva to shine the cricket ball in order to assist them in swing and seam. Now, the COVID-19 pandemic might force other alternatives in a game where bat is already dominating over ball.

In the era of broad bats, short boundaries, flat pitches, T20 style powerplay and punishing schedules, the bowlers are threatening to become an extinct species. The use of saliva or sometimes sweat has been the only primitive way to ensure that they can get some swing to trouble the batsmen.

Already, saliva is considered too risky to shine a ball in the wake of the coronavirus pandemic. Speaking to ESPNCricinfo, Australia pacer Josh Hazlewood had remarked, “If you didn’t maintain the ball at all for 80 overs it would be quite easy to bat after that initial shine has gone. I think the white ball would be fine, but Test cricket would be very hard.”

Hazlewood’s comment was echoed by Pat Cummins who said life for bowlers would become very hard if saliva was taken out of the equation.

In the wake of this move, what can the ICC and the governing bodies that control cricket do? The COVID-19 pandemic has given them a chance to do something out of the box. It is now time for the ICC to legally mandate ball-tampering.

According to law 41 in the playing conditions, it states, “Polish the ball on his/her clothing provided that no artificial substance is used and that such polishing wastes no time.”

The word artificial is important. In the past, bowlers were caught using a bottle top opener, spikes, teeth, nail, mint, sandpaper and Vaseline wire gauze to ensure that the team’s bowlers would get an advantage.

Now, it is the time for the ICC to scrap the entire law regarding ball-tampering. Instead, the bowlers should be permitted to use any substance that can help them in swinging the ball under the hawk-eyed watch of the umpires and the match referees. In order to generate swing, reverse swing, these measures will be needed.

It is about time that the ICC and the rest of the sporting public shun their convenient sanctimony on following the laws of the game to the hilt. Ball-tampering must be permitted under all circumstances provided it is under the guidance of the officials.

As mentioned, the bats are bigger, the boundaries are smaller and global warming all across the world has ensured that grassy pitches and the clay that is used for making bouncy pitches are no longer viable.

It is not possible for every country to dish out grassy decks and hard wickets due to the climate. In this case, the ball is the greatest equaliser. If the ball can be altered for the bowlers to get some assistance under guidance, it is actually not a bad idea.

The impact of T20 cricket is that the battle between bat and ball is far from equal. ODIs somehow balance the situation but in Tests, conditions determine whether bat or ball is equal.

Legal tampering of the ball and the legal use of the substance to tamper with it are two out of the box solutions that the COVID-19 pandemic has offered to the ICC. It is upto them to grab it with both hands.