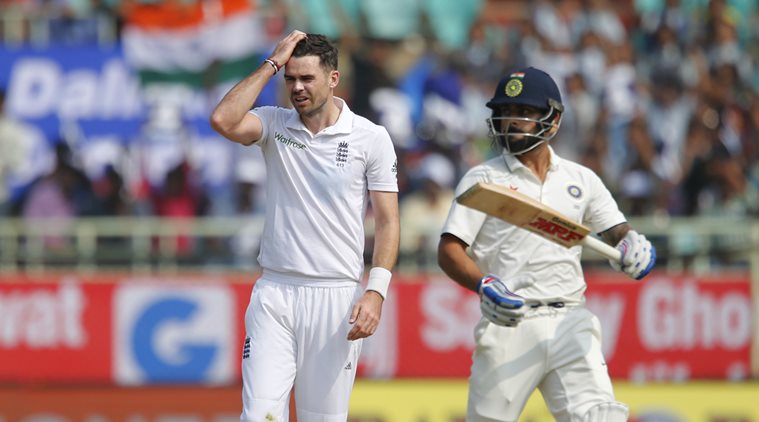 India's captain Virat Kohli, has been the only shining light in this tour (Image: The Indian Express)

After the 31-run loss at Edgbaston, the struggling visitors saw themselves go 0-2 behind in the five-match series after suffering another embarrassing 159-run innings defeat in the second Test against England at Lord’s.

Indian batsmen failed to learn from their mistakes and were all at sea against the moving ball. The batting altogether has been a pale shadow of the glory achieved over time back at home.

Pressure is mounting on the Indian batsmen after a series of poor performances. A lot has been said from pundits and former cricketers alike. Moreover, the Committee of Administrators (CoA) is baffled by the failure of the top order and as per reports, the Board wants to meet coach Ravi Shastri post the series. India has been in the UK since close to two months now and the struggles have mounted for Virat Kohli & Co.

James Anderson (4-23) was unplayable for the opposition, as he took his match tally to nine. Then there was his new ball partner  Stuart Broad (4-44), who wrecked apart the Indian middle-order in a hostile spell post lunch on Day 4.

Kohli has stated that the battle for the batsmen is more mental than technical. Time is running out and India needs to come back strong in Nottingham.

No one, except Skipper Virat Kohli has shown enough grit and determination to stay on the wicket for long. The talks of conditions too are baffling as the batsmen are continuously making same mistakes. So where is the homework? The batsmen, barring Kohli, managed 236 runs in both innings at Edgbaston, while at Lord’s the number dipped further to 197.

The picture presents a sorry state of affairs and with Australia waiting to greet the side in 2018-19, the situation could get even worse. Kohli has a lot to do in terms of analyzing his side. Others need to play their part in getting ready mentally and countering the moving ball.

How often do we see Shikhar Dhawan found wanting with his footwork in Test cricket? Is he too lazy to move his feet? At Edgbaston despite getting the start, the southpaw on both occasions went chasing after the ball that could be left alone. The end result, a simple catch to the slips.

39 runs are all that he managed at Edgbaston.

India’s other senior player Murali Vijay had a commendable 2014 in England individually. But gone are the days of seeing Vijay play the ball late and taking no risks at all. He used to be patient and being watchful was his strength.

2018 sees the player in the worst form of his life. After the flop show in South Africa, Vijay’s painful time at the crease has increased in England.

He has had issues with both the in-swinging ball and the ones that have swung away. He registered a pair of ducks at Lord’s after scores of 20 and 6 in the first Test. Similar issues for Vijay here as well, as his feet are going nowhere making him vulnerable to swing.

Interestingly, KL Rahul, who was made to open in place of Dhawan, fared no better. Indian openers never opened the account in the 2nd Test and with Vijay back early, the struggling Cheteshwar Pujara was exposed sooner than what he would have expected.

Rahul scored 8 and 10 in both innings at Lord’s and the scenario was familiar to that of Edgbaston. His shot-making was horrible which is below the standards set in Test cricket.

The trio have been excellent in the subcontinent, but once you remove them from their comfort zone, they seem to be in a different zone altogether.


Cheteshwar Pujara came into the Lord’s Test with nothing behind him in 2018. He struggled in England in the County stint and South Africa tour earlier was forgettable. The Indian premier No.3 batsman scored 1 and 17 at Lord’s.

Pujara’s issues against the in-swingers once again came into existence. It has been bothering him for quite some time. He has been bowled 25 times since his debut in Test cricket. Stuart Broad castled him to break the fort he had built around himself in the 2nd innings.

However,  the issue here was the lapse of concentration and the front foot, that was rooted to the crease. A nothing shot saw him depart.

Pujara did manage to spend some time in the middle, facing 25 and 87 balls respectively, but there was no desire to get runs. A familiar Pujara occurrence outside the subcontinent.

Kohli has been the only player that has looked to show some steel. He had an excellent first Test as he racked up 200 runs. He got starts at Lord’s but couldn’t continue to bat long. He batted with a back injury in the 2nd innings, but he is in the race to be fit in time for the third Test.

The comparison between Kohli and the other batsmen is way aloof at the moment. All-rounders Hardik Pandya and R Ashwin are the only players that have scored some runs in South Africa and England. The duo, in fact, have outnumbered Indian star batsmen collectively. Such is the graveness of the issue.

This brings our focus on Ajinkya Rahane and Dinesh Karthik. The Indian vice-captain, Rahane is in a vulnerable situation as far as his career is concerned.

Overlooked in T20Is and ODIs, Rahane a Test specialist like Pujara, found himself wanting in both the games. It’s been long since we witnessed anything worth mentioning about the player, who was regarded as India’s best overseas performer.

Surely, Rahane is lacking in confidence and his body language doesn’t give out a positive signal. Three of his four dismissals were chasing wide balls. That shows why it’s just more than the mental and the technical approach.

DK, on the other hand, was expected to do add more technicality and the composure needed in the middle. But the in-swingers have left him in a place of discomfort. 21 runs in four innings have seen him leave a lot of gap between bat and pad. The position of bother for India has been the wicket-keeper batsmen. And DK hasn’t done any different to that of his predecessors.

What next for Indian batsmen?

The issue for India here is that the side do not have anybody to fall upon if Kohli has a bad day. Also, their bench doesn’t look strong enough to counter the issues if the premier star fail. So to sum this up, there is no Plan B at the moment.

Perhaps, there is a hope that Kohli will come out and play the big innings every time and keep the side in the hunt, but that isn’t going to happen. Going by form, only Kohli, Pandya, Ashwin and the pacers deserve a starting berth. The rest five places are up for grabs at the moment.

The repeated failures of Vijay, Rahul, Pujara and Rahane mean that the series is gone from India’s hands. Realistically we don’t see these four and Dhawan fare spectacularly well against James Anderson & CO. The English bowlers are in with a lot of venoms and their confidence at the moment is sky high.

Therefore, it’s possible that when India prepare for the series against West Indies at home, one might see drastic changes in the batting. Also, an inexperienced side could be on the plane to Australia.

For now, this first new blood could be Rishabh Pant. The young Wicket Keeper may get the nod for the third test.