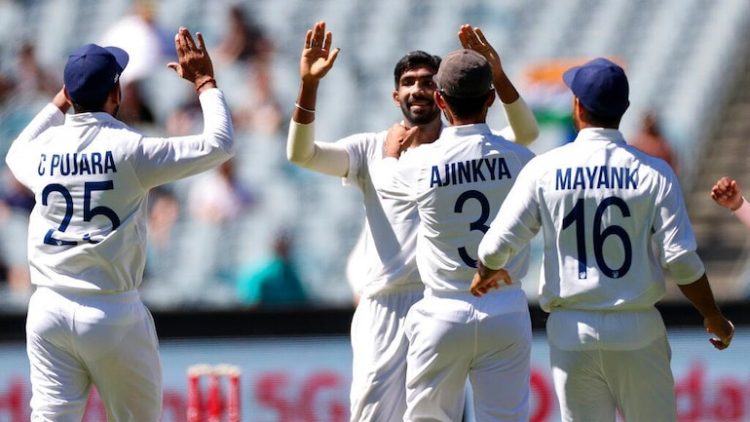 By the end of the first day in the Boxing Day Test being played in Melbourne, the Indian team has scored 36 runs after losing 1 wicket. Also, the Australia team was reduced to 195 runs in the first innings. In this context, the team has taken a lead of 159 runs. At the moment, Shubman Gill (28 runs) and Cheteshwar Pujara (7 runs) are unbeaten.

The Indian team did not have a good start in the first innings. Opener Mayank Agarwal returned to the pavilion in the very first over of the innings. They could not even open an account. Mitchell Starc LBW him.

Fast bowler Jasprit Bumrah sent 4 players from Australia to the pavilion. The first wicket was also taken by Bumrah. Opener Joe Burns was caught by wicketkeeper Rishabh Pant without opening the account. He dismissed Travis Head for 38, giving the team a fourth blow. Ajinkya Rahane took his catch. Bumrah got Mitchell Starc (7) caught by Siraj as the third wicket.

Australia had a poor start. The team had lost 3 wickets for 38 runs. During this time, Joe Burns and Steve Smith could not even open the account. After this, Travis Head and Marnus Labuschen took the innings and shared 86 runs for the fourth wicket. After this, the team faltered and lost 7 wickets to make the last 71 runs.

Fast bowler Mohammad Siraj took two wickets in the debut test. He sent Marnus Labuschen (48) and Cameron Green (12) to the pavilion. Labushen was caught by Shubhaman Gill. Coincidentally, Gill also had his first catch in this debut match. Green was LBW by Siraj.

Smith could not open account against India for the first time

Steve Smith is out for the first time without opening an account against Team India. So far he has scored 1431 runs in 12 Tests against India. It consists of 7 centuries. He has been dismissed for one run twice. His best score against India is 192, which he scored in 2014 in Melbourne.

The playing eleven of the Indian team was announced a day before. 4 changes were made to the team. This is the debut test of Shubman Gill and fast bowler Mohammad Siraj. Rishabh Pant got the chance to replace wicketkeeper Wriddhiman Saha. Prithvi Shaw, who was a flop in the first Test, was dropped.

At the same time, all-rounder Ravindra Jadeja has got a place in the team. Captain Virat Kohli has returned to India on Paternity Leave. In such a situation, Ajinkya Rahane has been given the responsibility of captaincy. Middle order batsman Cheteshwar Pujara will be the vice-captain. Coach Ravi Shastri handed Shubman a debut cap number 297 and Ravichandran Ashwin handed a debut cap number 298 to Siraj.

India must win The Boxing Day Test to stay in series

To stay in the race to win the series, the Indian team must also win this match. Australia are 1-0 in the series after defeating India by 8 wickets in the first match. The Indian team has won the last two series against Australia. In such a situation she would like to create history by winning this series too. Team India could not win 3 consecutive series against Australia so far.