Since 2018, Indian Fast Bowlers in Test cricket, have done a remarkable job in setting up the base for the side’s dominance in the format. Captain Virat Kohli will be proud of the way the Indian Bowlers have step up for the job. His pool of Indian Fast Bowlers and the depth in the ranks is huge. That is something any side in this format needs to have its base set on.
Team India recently played five Tests at home. They thrashed South Africa 3-0 in October and then pummelled Bangladesh 2-0 recently. Over decades, Test cricket in the sub-continent and in India especially was dominated by spinners. The old ball did the trick and sometimes we also saw spinners open the bowling. However, gone are the days now where spin is India’s main forte in Tests at home.
The last two-Test series and now the one against Bangladesh gave everyone a glimpse of how the Indian fast bowlers have come in and taken the command. Kohli has the luxury of fielding three pacers on home soil. That’s a luxury many teams in this format cannot do on the sub-continent. With the two-spin all-rounders boasting of world-class status, India has the luxury of playing a 6-5 dimension in the playing XI.
Indian Fast Bowlers have done everything so remarkable since 2018. The performances away from home have been top-notch. And at home, in particular, the rise has been extremely powerful. Since 2018, Indian fast bowlers have upped the ante and can be considered among the world’s elite.
In this article, we analyze how the Indian pacers have worked collectively and made their presence felt.

2019 has been a dream run for the Indian fast bowlers 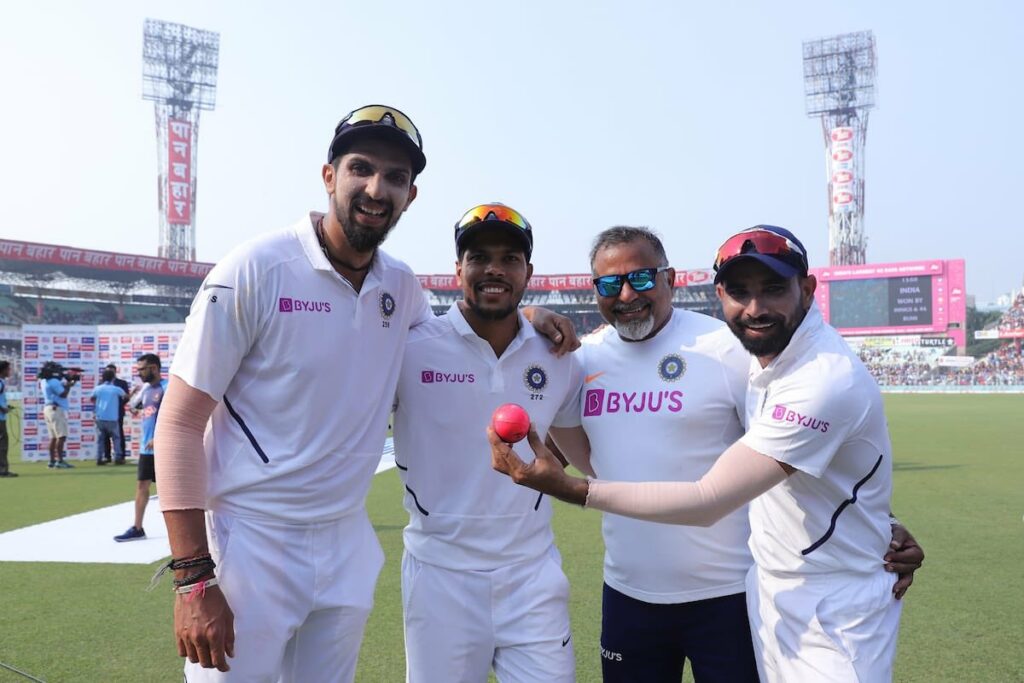 To show their role in coming forward as a unit, 2019 has been a dream ride. India played eight Tests in 2019 and out of that, five Tests were played at home. India claimed a total of 100 wickets (including run-outs) at home with 59 of them being bagged by the pace-bowling unit. This is an immense tally by the Indian fast bowlers.
Out of these 59 wickets, 26 came in the three Tests against SA. Whereas, 33 came in the two-match Test series against Bangladesh. When you further break down the stats, 19 of the 33 wickets against Bangladesh came at the Eden Gardens where both teams played the Day-Night format. Bangladesh managed to bat only for 71.4 overs across both Tests against India in Indore and Kolkata respectively.
This is sheer dominance by Team India in Test cricket at home.
You can see a shift of the tide here and that helps the side. The spinners do not have that bulk of workload anymore. There is lesser pressure and Kohli can work with the pacers both with the new and the old ball.
Also, all the Indian fast bowlers have now developed the knack of claiming five-wicket hauls pretty frequently. In the last three series for India, the quartet of pacers have picked six five-wicket hauls. That’s pretty remarkable.

ICC World Test Championship: How Fast Bowlers are so crucial? 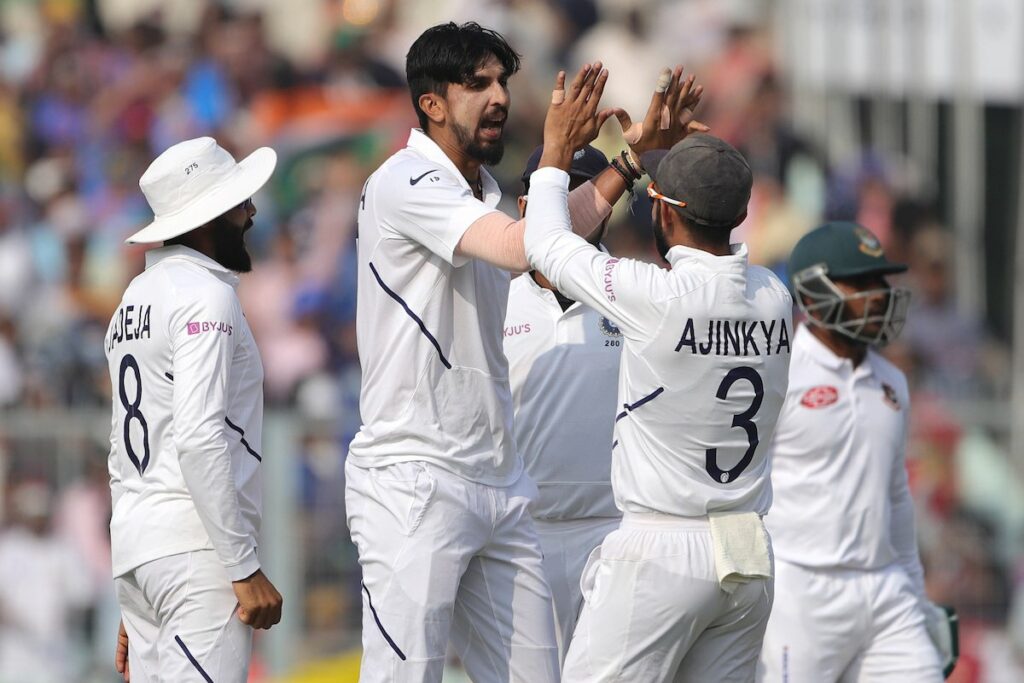 Team India has won all of the seven Tests in the ongoing ICC World Test Championship. Besides the 59 wickets in the two series at home by the pacers, the two-match series against West Indies also saw them dominate the show. Against West Indies away from home, Indian fast bowlers collected a total of 33 wickets out of the 40 taken.
That’s a total of 92 scalps by the Indian fast bowlers in a total of 7 Test matches since August 2019. India, who are on top of the table in the World Test Championship with a 100% record, are being carried by the pacers at large. The likes of Ishant Sharma, Mohammed Shami, Jasprit Bumrah and Umesh Yadav are all claiming wickets.
The contribution by this unit will be massive against New Zealand next season away from home. That will be India’s massive Test on offer, and a lot will depend on how Indian pacers fare. Post that, India will be involved in four Test matches Down Under next year. That’s going to be quite a challenge against Steve Smith & Co.
India’s last Test assignment in the Championship is against England at home in January-February 2021. A total of 11 Tests await India and the Indian fast bowlers will be crucial to help the side finish strongly. 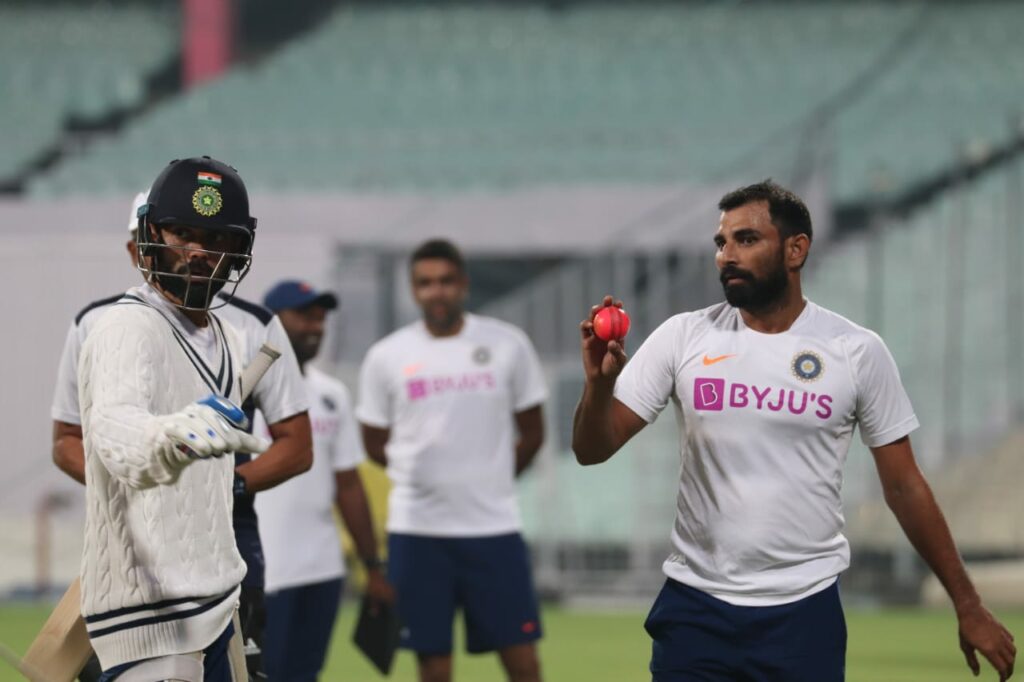 India has quite the advantage when it comes to experience in the bowling unit. Ishant is 96 Tests old and has clinched 292 scalps. Shami has already fetched 175 scalps from 47 Tests. Umesh, who generally excels on home soil, has 142 in 45 Tests. Whereas, Bumrah, who made his debut in the longest format last year, has already been impressive by claiming 62 wickets in 12 matches.
That’s a strong pace unit on offer and it has shown that wickets can come in abundance in both home and away conditions of late. What it does for Kohli is that he can rotate the options and attack at large. India is at par with Australia and England in terms of boasting of the best fast-bowling attack. The numbers indicate the same.
Over the last two years, Australia and India have dominated the charts in terms of wickets taken in a calendar year.
Kohli trusts this group to the core and had recently claimed India has the best pace-bowling unit in the world. “Well, if you ask we are right at the top. I won’t even count ourselves among the top 3. These guys deserve it. When we started off, that was the conversation. When I took over as captain, I really wanted to see our fast bowlers dominate world cricket,” the Indian captain had said in a press conference.
Kohli pointed out the belief held by this Indian fast bowling unit. “Just see the way they have bowled. It’s their belief that stands out. Any kind of pitch, any kind of opposition. They believe they can get more out of any pitch than the opposition. That belief matters a lot. I couldn’t be more happy for them,” Kohli added.
The Indian bowling quartet has been hungry and has created the vision for youngsters to take up this trade. That’s a big bonus.