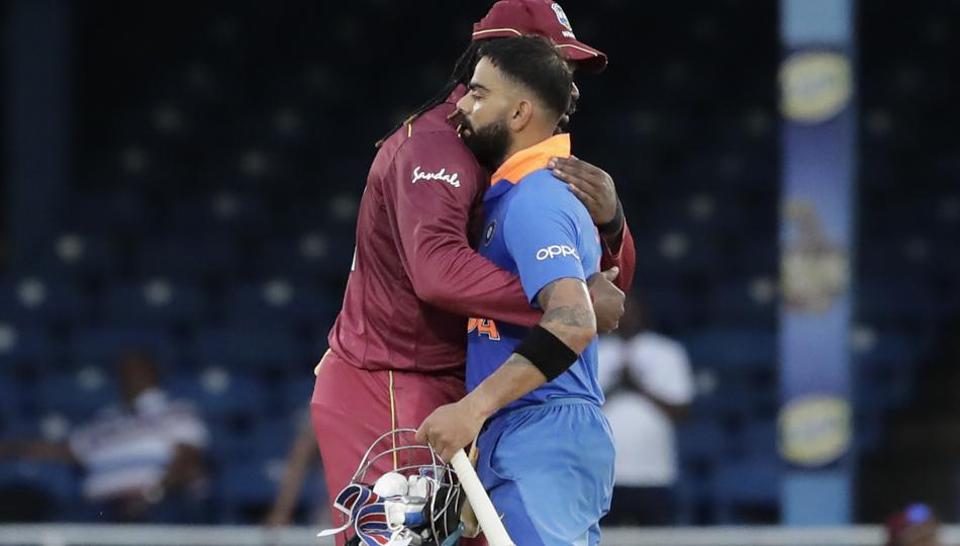 India completed the whitewash in the ODI series against West Indies on the eve of Independence Day.

Thanks to the heroics of the skipper once again, India won the match quite comfortably.

For the first time in the series, West Indies won the toss.

They chose to bat first and Gayle walked out for his 301st ODI wearing a special jersey.

He smashed a blistering 72 off 41 deliveries that helped the Windies to set the momentum for a big total.

Evin Lewis played the role of an ideal partner by scoring a 29-ball 43.

Their partnership of 115 runs set the base. The middle-order also clicked and contributed with valuable runs.

Gayle was in his usual good.

He celebrated in RCB style after his dismissal with his IPL colleague Virat Kohli.

He was given a guard of honour and walked off amid the standing ovation by all on his way back to the pavilion.

All expected this to be his last international appearance.

He had wished for a Test against India at home which was not granted by West Indies selectors.

He became the first Windies cricketer to appear for 300 ODIs and went ahead of Brian Lara to become the highest run getter in the 50-over format for West Indies.

The stage was set for a perfect goodbye. But Gayle didn’t approve.

Later, he clearly said he didn’t announce anything about his retirement.

So Henry is still there and the show must go on!

Khaleel Ahmed, although ended as the most expensive bowler for India, took three wickets as well.

Mohammed Shami picked up two while Ravindra Jadeja and Yuzvendra Chahal scalped one each.

The bowlers did allow West Indies batsmen to build a partnership but kept giving back to back breakthroughs at regular intervals.

Virat Kohli is back! The Indian skipper was the star once again as he stole the limelight from Chris Gayle to help India clinch the third and final ODI.

A rain-affected match saw Kohli leading from the front, smashing runs all over the ground and winning the match for India by six wickets at Trinidad.

India were given a revised target of 255 after DLS calculations in 35 overs.

Initially, Indians were in trouble as they lost Rohit Sharma (10) in the third over. Then Shikhar Dhawan (30) followed him with the team score on 91 in the 13th over.

Rishab Pant once again gave a glimpse of his immaturity by playing an unnecessary shot.

He was pouched by Keemo Paul and Pant was gone for a duck in the same over. India were clearly in trouble once again. With the skipper on the pitch, Iyer joined in.

Then Kohli and Shreyas Iyer went on to add crucial 120 runs together to seal the series for the Men in Blue.

The job was almost done by then and with Kohli (114 off 99) on the 22 yards till the last ball, nothing could go wrong for India then.

By the way, it looks like Indians have found their number four bat for ODI in Iyer. Are the selectors watching?

The 43rd match of Kohli yet again witnessed him making new records to his name.

He had scored an unbeaten 111 in the final game of the 2017 ODI series. Virat completed 10000 runs in International cricket as captain.

He achieved this feat in just 176 innings. The Indian captain became the first player to accumulate 20000 International runs in a calendar decade.

He also completed 11000 ODI runs in this decade during this hundred.

Fabian Allen gave shocks to Indians after scalping Dhawan and Pant in the same over. He ended with 2/40 in his six overs. Apart from him, Kemar Roach took one more wicket of Indian innings. He managed to take the wicket of Shreyas Iyer- an important one but Iyer did his job well before getting dismissed.