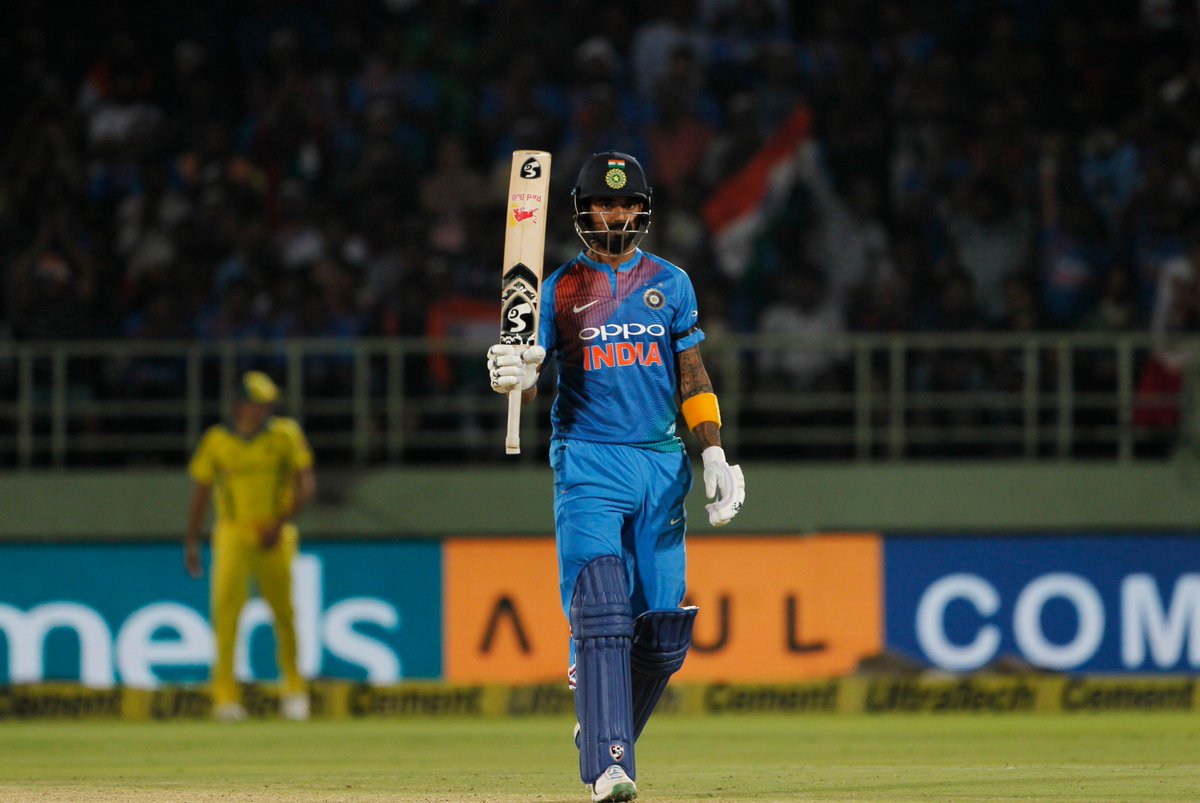 India went on to lose a last-ball thriller against Australia in a low-scoring affair in the first T20I in Visakhapatnam. The match swung one way and the other and India’s gamble in trying out players they want to be assured of regarding the World Cup gained significance. One of which was the introduction of the returning KL Rahul and he seemed to have started on the right note.

A lot has been going on for the Karnataka batsman off late. He struggled big time in Test cricket since last year and was rightly dropped. A regular in the limited-overs squad, Rahul, would have wanted to play in the ODI series against Australia last month. But a controversy on a chat show saw him get suspended and he then missed the limited-overs leg in New Zealand.

KL Rahul is lucky though that the team management has always backed him. Even when the going has been tough, Rahul has found support. That is what kept him alive with a shot for a spot in India’s ICC World Cup 2019 squad. For one moment many would have thought that Rahul will end up losing a berth, but there was always going go be this last chance to show what he is capable of.

The team management is looking for a back-up top order batsman for the mega tourney in England and Wales. And Rahul has been identified as the one to claim a shout. But then, he still isn’t assured of the same. The reality for Rahul is that three batsmen are fighting for two extra spots. Rahul, Rishabh Pant and Dinesh Karthik are the three.

Post India’s last ball loss, skipper Virat Kohli said that both Rahul and Pant will get ample chances ahead of the World Cup. That will be soothing to the ears for these players.

A decent start for Rahul

On Sunday against the Aussies, Rahul didn’t disappoint anybody, He came in and struck a well-balanced 50. It was his fifth career T20I fifty and a first against Australia. So much so, it was his shot making that looked impressive. Rahul crossed the first hurdle. The innings must have helped him to settle down some nerves. He will know that it is just the start though. India will play another T20I, besides five ODI matches.

Therefore, one would expect him to play majority of these matches. India want to be assured with the options they would want to have. Shikhar Dhawan and Rohit Sharma are settled opening batsmen, but India will need someone to come in and provide that cushion. The scenario at the moment is that Pant is being eyed as a middle order option and also that of a finisher.

On Sunday, the southpaw failed after being run-out for five runs. Like Rahul, he has been assured of getting ample chances to show his worth in this limited-overs series against Australia. Meanwhile, veteran Dinesh Karthik had seen himself get dropped from the ODI squad. He had given a decent account of himself in Australia and New Zealand.

So if Rahul presents a strong case, then his situation will be brighter leaving the one spot to be fought between Pant and DK. If Pant fails to take the chances, then the latter will get the nod. At the moment, it is up to Rahul to continue from where he left off in Vizag. The bigger test will come in the ODIs for the right-handed batsman.

One knows that T20 cricket is his forte. So the big fish lies in the ODI scheme of things.

Rahul needs to carry on with the momentum

Post the series against Australia, the Indian Premier League will start from March 23 onwards. A positive series for Rahul will help him be more upbeat in the global T20 league. Last season saw the 26-year-old dominate the show for Kings XI Punjab. The franchise will expect big things from the player. But we do not expect the Indian team for the World Cup to be based on IPL.

Most of it is already decided and it is the series against Australia that will be the final nail in the coffin. But then it is an interesting phase for someone like Rahul. He has to show that he is mentally ready after a tough 2018 especially in the red-ball format. The controversy as well may have taken a toll, but with performances as such, Rahul has shown that he is ready to start afresh.

It’s just one match and it will be too early to pass any sort of judgment or jump the gun on this matter. Let’s give him some time. It is still an important next few weeks for the player. It is all about confidence. Therefore, whatever is gained here, will automatically transform him for the IPL. Irrespective of whatever happens, it will be a psychological advantage for some one like Rahul.

He needs the runs to back himself. And fans would be hoping that he isn’t just a one-season wonder in the IPL. Rahul is no doubt a highly talented batsman and he has the potential to shine. But it’s high time that he changes the same into matured performances more often. His ability can ensure him a positive road ahead.