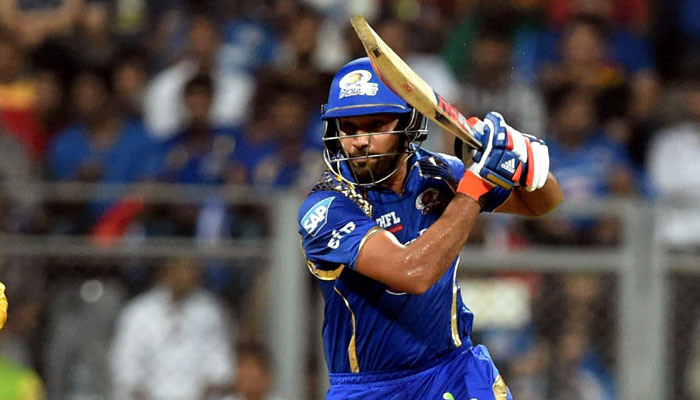 This was a rare win of sorts for Mumbai Indians and a much needed too. That, coming against Chennai Super Kings, in the Indian Premier League 2018, will give the side massive confidence going forward. What an occasion for Rohit Sharma’s side in Pune, where they spoilt Chennai’s party. An all-round performance helped MI outclass CSK with skipper Sharma leading the way with a 33-ball 56.

In pursuit of 170 runs, MI staged a brilliant chase with the likes of Suryakumar Yadav (46), Evin Lewis (47) and their skipper with a half-century steering the side to a victory in 19.4 overs. This was CSK’s 2nd loss in seven games and it felt quite like a surprise defeat given their form this season.

Earlier, CSK managed to ride through Suresh Raina’s unbeaten 75 and Ambati Rayudu’s 46 to reach 169/5 in a game where MI bowlers hit back hard to not let them get that extra 15-20 runs. And at the end that made the difference with MI surging past the line in a final two-over blitz.

The Hitman has done it for @mipaltan. An unbeaten 56 from @ImRo45 has handed #MI a crucial 8-wicket win. #CSKvMI #VIVOIPL

It was that sort of a tie where Mumbai Indians needed their captain to play the kind of innings he can. And he did not disappoint. It was indeed a top effort from Rohit, who hit 56 runs, smashing six boundaries and two sixes. Rohit wasn’t on song up till now apart from the 94 he made against the Royal Challengers Bangalore.
It has often been the case that when Sharma gets going, his team wins. And Saturday gave us that indication once again. He shared two vital stands with Evin Lewis and Hardik Pandya in a 59 and 42 run-partnership respectively. The whirlwind boundary hitting mixed with finesse and class in the 19th over off Shardul Thakur showed how dangerous Rohit is and how difficult it can get for a bowler to get going against him.

What can be said about the southpaw, who is the highest scorer in the IPL since more than a decade now? This was vintage Raina innings in Pune. Without him, the Super Kings would have been in dire straits. The six off the final ball of the innings was a top notch entity.

The southpaw brought up his fifty in just 35 deliveries before racing to 75 runs off 47 balls. He shared a commanding 71-run partnership with the in-form Ambati Rayudu and that helped CSK get the scoring going smoothly. Raina made room time and time again to play some rollicking lofted drives. His heaves over mid-wicket and the traditional slog sweep made one feel he is the old Raina of yesteryears.

Raina has carried his form off late into the IPL and it is a special delight.

The strength of MI this season has been their bowling and the likes of McClenaghan and Krunal Pandya were on the money. Pandya was the chief architect in getting two prized wickets in the form of Shane Watson and Ambati Rayudu. Krunal deceived Watson with a slower, loopier delivery and got him out early on.

The all-rounder then ended the partnership between Raina and Rayudu by getting the latter. The Orange Cap holder was well set before an attempted slog-sweep off Krunal did him in. McClenaghan did what he does best. The Kiwi left-arm pacer bowled according to the demands of captain Rohit, who set the field accordingly and he got the dangerous MS Dhoni (26).

A delivery later he got the power-hitting West Indian Dwayne Bravo for a nought. CSK needed some gusto from Bravo, but the clever McClenaghan got MI back into the game.His 2/26 in four overs was a gem.