IPL 2019: A Look At One Best Finisher From Each Franchise 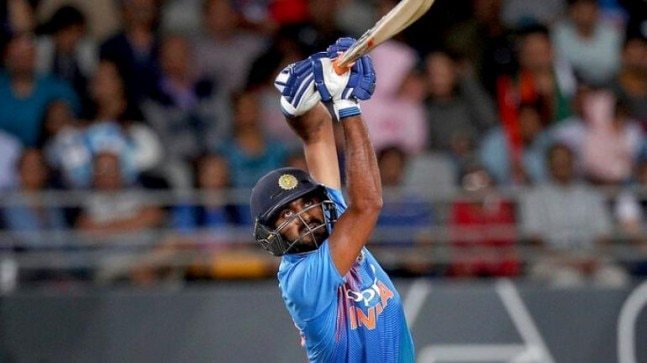 The 12th edition of the Indian Premier League (IPL) season starts from March 23 onwards. Like the yesteryears, we could be in for some mind boggling matches. Finishing is one aspect that will excite the fans. It is a sure art and mental strength to get a side to respectable totals in the end. Sometimes in the chases, the situation gets even more better. Every side will hope to bring out the best in this department in IPL 2019.

Finishers are often the difference for sides in terms of giving that extra bit of push. From taking matches away to keeping their side in the hunt, a role of a finisher in T20s is massive. IPL 2019 will see these players take the mantle once again. What makes it more interesting is the influx of several new entrants, who are in line to make their debuts in IPL.

So it would be challenging for them to enhance their reputation as the big-hitter in the upcoming season.

Here is a look at the best possible finisher from each franchise.

West Indian power-hitter Andre Russell needs no introduction. The all-rounder is a go to man for the eastern giants and his exploits were there for everyone to see in the IPL 11 season. He struck the ball so ferociously and the strike-rate was a massive 184.79 which helped him to make his presence felt. He hit a towering 31 sixes and that was a solid return.

KKR’s promising season in IPL 11 was largely due to Russell’s impact both with the bat and ball. Going into IPL 2019, Russell will be wanting to keep up with the consistency. The youngsters need to revolve around the powerful player. Russell has the attributes of changing the complexion of the game at any time he desires. KKR would be looking to give him maximum exposure and he can be rotated as per the demands of the match situation.

Russell is a proven T20 player and his experience will serve as a cushion for Dinesh Karthik’s side. Russell’s responsibility is huge if KKR are to do well and go far in the T20 tourney.

Here’s Russell’s stats in the IPL.

MS Dhoni: A winner on and off the field

From spinners only, Indian cricket on fast lane

Fortunate to have played with Kohli: Kane Williamson

IPL 2018 winners Chennai Super Kings were solid throughout the season and they mastered several close encounters. CSK are a side that will thrive on tense situations and come out more often as the winners. The most consistent side in the IPL, CSK will have some mega finishers at their disposal.

Dwayne Bravo was exceptional in a few games as a finisher and he brought his knowledge into the game and was never unfazed. Besides him, Kedar Jadhav returns to the southern outfit this time. He is a strong finisher as well and his exploits for India means that he would be relied upon at times. But the star finisher of this side is still the evergreen MS Dhoni.

Dhoni had one of his best seasons during the IPL edition last term. He settled at the crease so easily and offered so much. From anchoring the middle order to scoring rapidly, Dhoni had a productive season. Dhoni scored 455 runs in 16 games at a strike-rate of 150.66. The veteran has shown this year that he is still in sync with the abilities and that will prove handy in the IPL.

Here’s Dhoni’s stats in the IPL.

Sunrisers Hyderabad have a strong squad going into IPL 2019 and there are plenty of utility players up their sleeves. SRH missed a finisher last season and often had to rely on their bowlers to win games. One smart move that makes sense this season is the trading of Vijay Shankar from Delhi Capitals.

SRH would have fancied the inconsistent Yusuf Pathan, but now with Shankar in they will feel more secured. Shankar has been a revelation for Team India in recent times and he has virtually secured his place in the ODI squad for the upcoming ICC World Cup 2019. Shankar is an able batsman and prefers hitting straight. He backs himself well and in the chances he has got for India, there was a lot of promise in those innings.

After this strong show, expect the player to nail a place in the SRH side. He can be that ideal number seven batsman and be promoted on certain occasions. His foray of shots and calm head makes him an ideal option for the Orange Army.

Here’s Shankar’s stats in the IPL.

Rajasthan Royals struggled with their finishing last season and this time they will turn to Ashton Turner for the exploits in the lower middle order. Turner is set to miss the first few matches as he will be on international duty, but once he returns, he will be backed by RR to give it a go. Turner won’t be available for the whole season if he gets selected for Australia in their World Cup squad. But for whatever time he stays here, it will benefit RR.

His intention came to fruition against India in the fourth ODI held in Mohali on March 10. Turner came in and won the match for the Aussies, who needed 359 to win. His unbeaten 84-run knock was brutal hitting and he didn’t spare anyone. His cheeky shots to that of the monstrous strikes saw him club five fours and six maximums. What defined this promising player was his running between the wickets.

Mumbai Indians need a better show this time after the inconsistency last term. MI have some powerful names, who can come in don the hat of a finisher. Kieron Pollard can get some big blows. There is Hardik Pandya, who is a star sensation. But Hardi hasn’t played much cricket of late and injuries have played a toll. That sees his brother Krunal get the nod as the ideal finisher for MI.

Krunal has got some decent outings for India in the shorter formats and he has gained a lot of confidence. The performance in the IPL has seen him gain grounds and he is a matured entity. Krunal was the main reason behind Mumbai Indians’ title-winning campaign in IPL 10. It was his match-winning innings of 47 runs helped MI defeat Rising Pune Supergiants by a narrow margin of 1 run in the final of IPL 2017.

Krunal can aid Mumbai at the death overs and his familiarity could be the trump factor.

Here’s Krunal’s stats in the IPL.

Shivam Dube was a headline buy for Royal Challengers Bangalore in the IPL 2019 Auction. RCB needed someone that could power them and the feeling will be strong with Dube’s acquisition. RCB struggled in this position over the years and last season was no different. This term it could change for the good.

The all-rounder, who will be making his IPL debut, will be given the responsibility to don the role as a finisher. It’s an important moment for the player, who has the credentials of getting those big blows. Dube’s exploits in the domestic circuit clearly show that he can put the ball into the stands at will.

One aspect that helped him create the wave in the auction was when he hit Pravin Tambe for 5 sixes in an over in the Mumbai T20 league. And then he replicated the same feat in a Ranji Trophy match against Baroda’s Swapnil Singh.

Kings XI Punjab lacked a finisher last season and they do not have a proven star this time as well. So it’s a sticky situation for the northern outfit. A lot will depend on the shoulders of Sam Curran, who could be donned with the responsibility of chipping in as a finisher. KXIP made Curran one of their headline buys this season.

The Englishman is mainly a bowling all-rounder, who can prove to be explosive with his confidence with the bat. He has plenty of shots in his range and will hope to take on the responsibility well. The youngster has played 47 T20s and has a fifty to his name. He played some powerful innings for England in the Tests against India last year.

Curran is still young and his debit season in the IPL could help him immensely in learning about the conditions.

South African all-rounder Chris Morris could play a huge role behind Delhi Capitals’ success in the upcoming edition of IPL. Delhi have a powerful batting line-up, but need an experienced head to finish off matches. That’s where Morris comes in. The veteran has plenty of experience in the IPL and knows the side well.

Last season, Delhi Capitals didn’t use Morris to full capabilities. It hurt them badly.The side often lost several close games. Hence, if Delhi Capitals are really serious about their chances this term. then they will need to use Morris’ abilities as a finisher and have him play an important role.

Morris will be hoping to get into the side and show his capabilities as an all-rounder.

Here’s Morris’ stats in the IPL.

MS Dhoni: A winner on and off the field

From spinners only, Indian cricket on fast lane

Fortunate to have played with Kohli: Kane Williamson