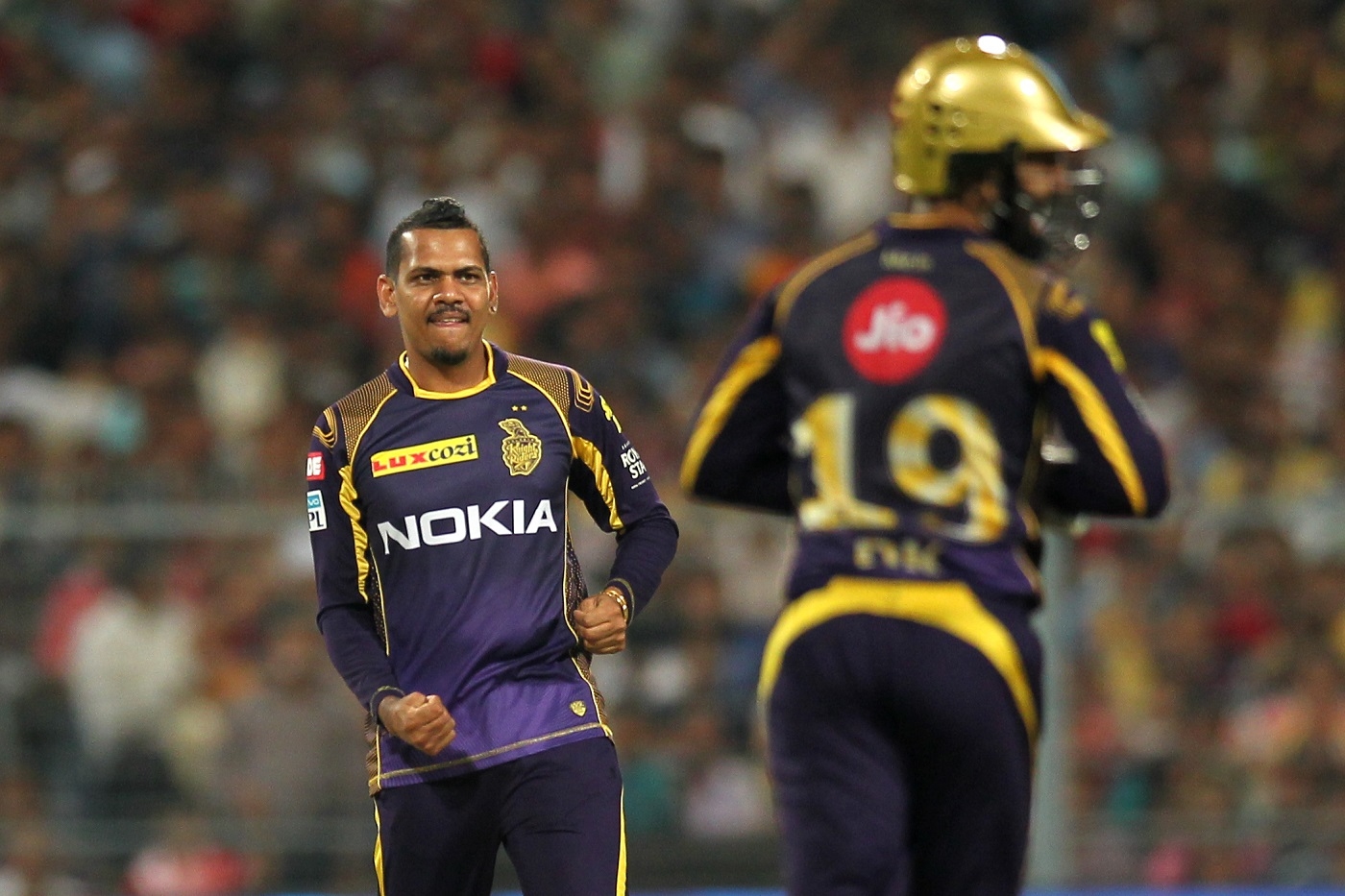 Sunil Narine in action for KKR in IPL 2018 (Image: SPORTZPICS)

The countdown to the 12th season of the Indian Premier League has started and we are three weeks away from the world’s most extravagant global T20 tourney. The excitement among the fans regarding IPL 2019 has started to set in with each passing day. With the ICC World Cup 2019 to start in May end, there will be added excitement for fans as they gear up for plenty of action on the cricket field.

Over the years, we have witnessed several key players a franchise often puts their money on. These players that have plenty of zeal and match-winning abilities are often considered to be the X-factor or the impact players. The IPL as a league has always boasted about having these players witch so much quality written all over.

Imagine the performance T20 veteran Shane Watson had for Chennai Super Kings in the finale of IPL 11. He smashed a superb ton to snatch the match away from Sunrisers Hyderabad. These are prime examples of impact players, who not only bring the goods on a single day, but present a lot of consistency throughout the season.

Going into IPL 2019, every franchise will count on that one special player that can bring fortunes in their campaign. To be honest, all the eight teams possess these kind of players that bring that extra bit of cushion. Moreover, the experience of playing in the IPL over the years, help them immensely. We hope that these cricketers can continue to shine and perform solidly throughout the campaign.

Here’s a look at one impact player of every team in IPL 2019.

Suresh Raina’s bearing for CSK has a lot of significance. He has been a consistent performer in the IPL since its inception in 2008. Raina had a solid campaign in IPL 11 as well and contributed immensely to the team’s success. Watson and Ambati Rayudu may have outscored him, but Raina’s 445 runs from 15 matches cannot be ignored.

Raina is the leading run-scorer in IPL history, with 4,985 runs under his belt. He has amassed 35 half-centuries and has 95 catches to his name. He could have a record-breaking season in store. Raina’s ability to score quick runs and bringing the solidity at number three will give CSK the base to work upon. His experience and the winning mentality makes him a dangerous customer.

Raina is working rad on his fitness and his timing of the cricket ball is still as good as any. CSK will look up to their old warhorse to bring that level of buzz around.

Afghanistan youngster Rashid Khan has grown on to become the most exciting cricketer in the world. He is the world’s best spinner in limited-overs cricket and the impact he has had is massive. Rashid is also one of the most popular cricketers in domestic T20 leagues across the world. His impact for Sunrisers Hyderabad has been brilliant over the last two seasons.

His quick leg-breaks, variations and ability to surprise batsmen have paid dividends. Rashid is also an aggressive batsman who has the ability to score quick runs and play those match-winning cameos. In IPL 2018, Rashid picked 21 wickets for SRH at a brilliant economy of 6.73. Overall, the spin ace has taken 48 wickets for the Orange Army. He is the go to bowler for SRH. His ability to bowl anytime during an innings makes him sorted.

England’s Jos Buttler can be termed as a champion striker, whose vision is spot on. The right-handed batsman adds so much vitality for Rajasthan Royals at the top. His role as an opener in T20 cricket  suits RR perfectly. Buttler’s versatility and knack of playing special innings, will give the RR a lot of cushion.

He is considered to be one of the most dangerous clean hitters of the cricket ball in world cricket. Buttler was RR’s best batsman in IPL 11. His promotion to the top of the batting order yielded great results and that helped them reach the play-offs. He scored an astounding 548 runs at an average of 54.80 and strike rate in excess of 155. He also set a record of smashing five fifties in a row.

In IPL 2019, Buttler will add the much needed essence for RR. Fans would be hoping for the repeat of IPL 2018 performance and there’s no reason why he will not be able to deliver.

Former South African cricketer AB de Villiers is one of the most loved players in the history of the game. Indian cricket fans respect him immensely for his exploits as a cricketer. He has rightly earned their love and respect with his outstanding batting and unorthodox style.

IPL 2019 will be crucial for ABD as he is one of RCB’s main core alongside skipper Virat Kohli. AB is playing T20 leagues around the world and that has kept him in sync with the demands of the shortest format. He has been in prime form with the bat and his run-scoring credentials are massive. Last season he smashed 480 runs in just 12 matches at a strike-rate of 174.54.

AB has scored a total of 3,953 runs and is in cusp of amassing a special record.

Kolkata Knight Riders (KKR) is one of the most successful franchises in IPL history with twi titles. Last year, KKR ended at number 3 on the points table behind CSK and SRH. KKR have some mega stalwarts in their ranks and several players can bring that X-factor mode. However, West Indies’ all-rounder Sunil Narine is their best bet.

Narine’s hard-hitting capabilities as an opener sees him take the game away from the opposition. His contributions as a premier spinner makes a huge difference in the outcome of the game. In IPL 2018, Narine played 16 matches. He scored 357 runs at a strike rate of 189.89. He also picked up 17 wickets and was the leading performer for KKR.

Narine is one of the established household names in the IPL and his impact over the years have been massive.

KL Rahul enjoys the T20 cricket and this is a format he relishes. The star cricketer is a strong customer atop and provides that shield for KXIP. Already in the recently concluded two T20Is against Australia, Rahul performed and scored two valuable knocks.  He is also the highest-ranked Indian batsman in the ICC’s T20I Rankings.

KL was KXIP’s star performer in IPL 11 alongside Andrew Tye. He scored 659 runs from 14 matches at an average of 54.91 and strike rate of 158.41. He was also the third leading run-scorer of the season. In IPL 2019, KL Rahul will have the burden of continuing from where he left off. A solid campaign can help his confidence moving forward.

He will have the talisman Universe Boss Chris Gayle as his strike partner. Rahul is KXIP’s best player to deliver the goods.

The youngster has all the credentials of becoming a top performer in world cricket. Pant came into the limelight last season after a defining season for Delhi. He is definitely one of the most exciting young cricketers in the world. His aggressive style of batting. ability to strike the ball anywhere in the field and positivity makes him a deadly T20 player. The new-look Delhi Capitals will be relying heavily on young Pant in IPL 2019.

In IPL 11, Pant scored 684 runs at an average of 52.61 and strike rate of 173.60. His innings of 128*off 63 balls against Sunrisers Hyderabad was the highest individual score of IPL 2018. Pant, who is vying for a place in the ICC World Cup 2019 squad for India, will look to use his strengths for a batting-rich DC this year. Expect him to come out all guns blazing.

Mumbai Indians will enter the tournament as one of the favourites. The three-time IPL winners will rely around the core players to perform strongly. And Hardik Pandya becomes an important feature for them. Pandya hasn’t played much cricket since his injury in the Asia Cup 2018 in September. Controversies off the field and an issue with stiff back means that Pandya’s confidence is a bit low.

He missed the ongoing series against Australia. A crucial member for India in the World Cup, the IPL is a platform for him to gain much needed game time. Pandya is one of the cleanest hitters of the cricket ball and he is very useful with his swing bowling, at any stage of the innings, too. If he attains complete fitness before the start of the tournament, that will serve MI well.