IPL 2020: Are franchises open to a dip in the transfer market? 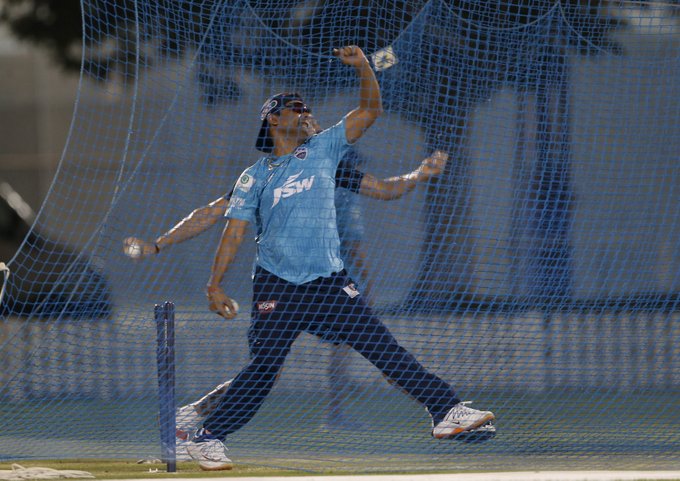 Amit Mishra will miss the rest of IPL due to a finger injury (Credits: Twitter | Delhi Capitals)

The IPL mid-season transfer window, which opened on October 13, has come as a massive lift for franchises that are either battling injury concerns or are on the lookout for quality personnel to plug holes in their squads.

While being touted as a favourite to lift their maiden IPL crown following a run of wins, the Delhi Capitals are sweating over the availability of some key personnel. Big-hitting wicketkeeper-batsman Rishabh Pant has suffered a Grade 1 muscle tear at practice and could be out for at least a week, if not more.

Worse still, his captain Shreyas Iyer left the field with a sore shoulder during the come-from-behind win over Rajasthan Royals on Wednesday and there is still no official word on whether he will be out marshalling his DC troops in the next match against Chennai Super Kings.

Just to put things in context, the Delhi Capitals have already lost the services of in-form veteran leg-spinner Amit Mishra and senior India quick Ishant Sharma. Both left the bubble after being ruled out of the tournament with injuries.

While Pant was initially believed to have suffered a minor hamstring pull, it was later diagnosed to be a Grade 1 muscle tear. As for Iyer, he has had a fruitful season, so far, both as a player and leader.

While he has aggregated 298 runs from 8 matches at a strike rate of 135.45, he has also proved to be a shrewd tactician on the field, leading his men to the top of the points table with six wins.

Losing him at a time when his team is close to sealing a play-off berth, will be a major blow for the franchise.

However, senior pro Shikhar Dhawan, who opens for DC along with Prithvi Shaw and led the team to victory after Iyer left the field on Wednesday, did hold out hope at the end of the game, saying although the skipper is in pain, he is able to move his shoulder.

With the form he is in and the kind of leadership he has shown, DC won’t mind playing him on one leg but it still doesn’t take away their injury concerns.

And this is precisely where the mid-season transfer window comes in as a huge help for the franchise as it will offer them an opportunity to bring in able replacements for their injured personnel.

While South African pace twins Kagiso Rabada and Anrich Nortje have proved to be a lethal new ball pair for the franchise this year, the think-tank may consider dipping into the transfer market to shore up their pace options following Ishant’s exit.

It might also make sense to bring in an injury cover for Pant despite the fact that the DC has a like-for-like in Australia stumper Alex Carey.

However, despite the loss of Mishra, their spin attack looks sorted with Axar Patel doing the star turn with slow left-armers and veteran Ravi Ashwin back fit and firing after an injury scare. They also have quality back-up options in Nepalese wrist spinner Sandeep Lamichhane and uncapped 22-year-old offie Lalit Yadav.

Without Raina and Harbhajan, CSK is not at its best

Another franchise which could do with some reinforcements in the transfer window is Chennai Super Kings. Far too often this season, their brittle middle-order has cost them dear.

With Murali Vijay not firing, the think-tank had to send the in-form Francois Du Plessis to partner Shane Watson at the top of the order, thereby weakening the middle-order, which though experienced, has failed to force the pace when it came to setting a target or chasing it.

Veteran Ambati Rayudu, the only beacon for them in the middle-order with 192 runs from six matches, has been largely inconsistent while Kedar Jadhav, another experienced campaigner, has had a wretched run with the willow, tallying a mere 58 runs from six matches. The gamble to play young Ruturaj Gaikwad and Jagadeesan in the middle-order hasn’t been fruitful as well.

While team CEO Kasi Vishwanathan has ruled out trading any squad member to rival franchises this transfer window, their brittle batting might force the think-tank to consider bringing in some quality recruits to shore up the department.

Kings XI Punjab may look for reinforcement in the middle-order

The third franchise which ought to go in for mid-season trade is Kings XI Punjab. The bottom-rankers on the League points table, the franchise, after a promising start, has seen its stocks plunge rather alarmingly following a run of losses.

Before the nervy win over Royal Challengers Bangalore at Sharjah on Thursday evening, the Kings had just one win from seven matches.

While skipper KL Rahul and his opening partner Mayank Agarwal have been in red hot form, with the former the maximum run-getter in the tournament so far, the middle-order and batters lower down have put up a dismal show as a result of which the Kings couldn’t close out games in their favour despite a strong start.

They have tended to lose momentum mid-innings with batters falling in a heap or failing to push the scoring along.

The two redoubtable names in their middle-order – Glenn Maxwell and Nicholas Pooran – have failed to produce enough consistent performances to contribute to a winning cause.

While Pooran snapped his lean run with the willow and produced a whirlwind 77 off 37 balls in pursuit of 202 against Sunrisers Hyderabad, he found little support at the other end as batters fell around him and the Kings eventually fell 69 short.

With 14 runs to get off the last over in the Abu Dhabi encounter with Kolkata Knight Riders, Maxwell had a chance to be the toast of his franchise but couldn’t get the team over the line. That was one in a string of underwhelming scores from the Australian’s willow, failing thereby to lift the Kings to glory.

With the mid-season transfer now open and given where they are placed in the team standings at the minute, it would scarcely be reckless for the franchise owners to loosen their purse strings for a few batting additions to the squad. Also, barring Mohammad Shami with the new ball and the wrist spin of Ravi Bishnoi, there hasn’t been a lot to shout about their bowling either.

West Indian left-arm quick Sheldon Cottrell, a top-dollar purchase at the players’ auction, hasn’t lived upto expectations and neither has Englishman Chris Jordan. Hence, the transfer window offers more than a decent scope for the franchise to boost their bowling resources. It makes more sense for the franchise to hit the transfer market with gusto as they are lying bottom of the pile in the League points table.

Should the franchises, which are relatively better placed in terms of personnel, also cut deals in the transfer window? Well, as for the Mumbai Indians, which currently tops the League points table with a superior net run rate of +1.353, mid-season purchases aren’t a pressing need.

Their batting looks settled with skipper Rohit Sharma and Quinton De Kock in sumptuous nick and the middle-order of Suryakymar Yadav, Ishan Kishan and Hardik Pandya in prime ball-striking form.

Suryakumar has, in fact, put himself in contention for an India cap with a run of good scores and has wowed fans and critics alike with his power-hitting and delectable strokes. His audacious paddled flick off a fiery Jofra Archer will certainly rank among the golden moments from this season of the IPL.

Their bowling also looks sorted, with the pace troika of Jasprit Bumrah, Trent Boult and James Pattinson among the wickets and the spinners, led by Rahul Chahar, effective in containing the run flow and making timely breakthroughs.

However, with Hardik not bowling, Kieron Pollard has had to step up and roll his arms over.

While the franchise has a wealth of options in the squad, they can possibly look in the transfer market for an experienced seam-bowling all-rounder as a cover for the burly West Indian.

Rajasthan Royals may not need any replacement

With Ben Stokes back and Rahul Tewatia emerging as a major all-round potential and a finisher in the making, the Rajasthan Royals are in a good place in terms of its squad and there’s no apparent or emergent need of making business during the transfer window.

Their vaunted bowling attack, led by tearaway Jofra Archer, has been further strengthened with the return of Stokes. In Joss Buttler, Ben Stokes, Steve Smith, Sanju Samson and Tewatia, they also have a gun batting order.

KKR could do with more experienced spinning options, as Kuldeep Yadav cut a sorry figure in the matches he played and has warmed the bench more often in the tournament, so far.

Their talisman and senior spinner Sunil Narine has also been forced on the sidelines after being reported for ‘suspect’ action. The think-tank was forced to blood the relatively inexperienced Chris Green in the match against the Mumbai Indians on Friday but he was largely ineffective in shackling the ‘Hitman’ and the free-flowing de Kock as KKR crashed to a defeat.

With the leadership change, KKR may look towards Morgan more for tactical change than any change in personnel.

With Morris back, RCB looks sorted for IPL 2020

The absence of key all-rounder Chris Morris, while he was out nursing an injury, clearly told on the RCB as they sorely felt the need of someone who could provide the late-order flurry with the bat and make in-roads into rival line-ups with the new ball.

While Mumbai all-rounder has shown promise with the bat, he looks far from a finished article with the ball. While Morris’s return has lifted RCB’s fortunes, the think-tank would be well advised to bring an experienced, like-for-like injury cover for him.

While Dale Steyn’s indifferent form has forced him out of the playing XI, Lankan Isuru Udana has done a fair job as the third seamer alongside Morris and Navdeep Saini. However, with Chris Morris doing well, RCB can think of Moeen Ali to strengthen the batting further.

Despite the loss of Bhuvaneshwar, Sun Risers Hyderabad have enough to give the transfer window a skip

The Sunrisers Hyderabad have a problem of plenty in terms of personnel as the likes of tall Aussie quick Billy Stanlake, West Indian all-rounder Fabian Allen, Kerala speedster Basil Thampi and West Indian Test skipper Jason Holder yet to get a game.

However, they may take a dip in the transfer market in search of a replacement for Bhuvaneshwar Kumar, who was ruled out of the tournament with an injury.

While the opportunity is there to make purchases or trade players, the question remains whether the franchise owners would choose fiscal prudence over the transfer business. Watch this space for more.