IPL 2020: Despite wins, bowling remains the Achillies’ heel for RCB 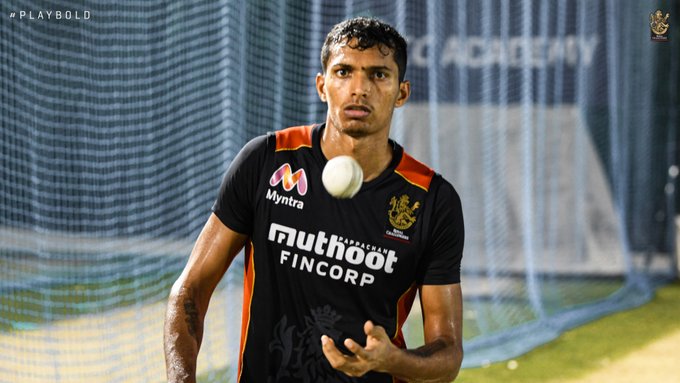 Other pacers will need to support Navdeep for RCB to do well (Credits: Twitter | RCB)

Any franchise which wins two of its first three matches in the Indian Premier League ought to be seen as going well in the tournament. But in the context of Royal Challengers Bangalore (RCB), the wins have barely masked their bowling inadequacies.

While the last season saw the RCB post just five wins from fourteen matches as their marquee batters failed to fire consistently as a unit, it’s the bowling this year which has emerged as it’s Achilles’ heel.

Though, it’s still early days in the tournament and two matches simply aren’t enough to sit in judgment on whether a franchise is well stocked up in terms of its batting and bowling units to mount a serious title charge, the bowlers, barring the express Navdeep Saini and the redoubtable Yuzvendra Chahal, haven’t been able to impose themselves on rival batting units.

Though they won their opening match against Sunrisers Hyderabad, it was more a result of a batting meltdown by the rival camp from a position of strength and accomplished performances by Chahal and Saini, their two best bets with the ball.

Set a target of 164, the Sunrisers were cruising the chase at 121/2 in the 16th over before Jonny Bairstow was outfoxed by Chahal at 61, triggering a sensational batting collapse. They were eventually all out for 153.

The second match was more a test case of whether their bowlers can hold their own against the likes of KL Rahul, Mayank Agarwal and Glenn Maxwell on a batting beauty in Dubai and it’s safe to say that their bowling inadequacies lay brutally exposed in the face of vicious batting assault by the Kings.

The bowlers looked clueless as the Kings XI skipper produced a batting masterclass, flaying the attack to all parts on way to a scintillating 132 off 69 balls.

Their new ball pair of Dale Steyn and Umesh Yadav missed their lengths and were put to the sword.

While Yadav conceded 35 off 3 overs at an economy rate of 11.66, the South African pace great clearly looked well below his best as he leaked 57 off 4 overs at 14.25. As if to cap off a forgettable evening, both went wicketless.

Though the other bowlers fared relatively better in terms of runs conceded, they couldn’t hold the Kings down to a manageable total.

Even in the win over Sunrisers, the lack of bowling resources was clearly evident as captain Virat Kohli had to bring on Shivam Dube to bowl the death overs.

While it didn’t prove costly on the night as Chahal and Saini had done enough damage to put the game beyond Sunrisers by then, Dube, with his friendly pace and lack of death bowling skills, could well have lost RCB the game against a better-placed Opposition.

Fast-bowling all-rounder Chris Morris, who moved to RCB from Delhi Capitals this year, wasn’t picked for the first two games as he was nursing a side strain.

He sat out the match against the Mumbai Indians, as well, on Monday. His unavailability does render the RCB attack weaker as he can bowl a heavy ball, has a good yorker and also has the ability to send the ball flying into the stands batting lower down.

Yadav paid for his profligacy in the defeat to the Kings as he was out of playing XI for Monday’s encounter, with Lankan medium pacer Isuru Udana taking his place. Steyn, too, was overlooked for this tie as Aussie leg-spinner Adam Zampa was picked to partner Chahal and Washington Sundar in the spin department.

Looking ahead to the game against Mumbai Indians, former India opener Akash Chopra had said RCB should ask De Villiers to keep wickets as it would enable them to leave out Aussie stumper Josh Philippe and play England all-rounder Moeen Ali.

While Phillippe was benched, the RCB think-tank preferred to go with an extra batter in Gurkeerat Singh Mann.

For the RCB to give their weak bowling some cushion, the batters had to put a sizeable total on the board.

With a big total on the board, the RCB bowlers had MI struggling at 78/4 in the 12th over.

However, the tide turned quite spectacularly as young Ishan Kishan, in the company of Kieron Pollard, orchestrated an audacious late-order surge to leave the RCB attack in sixes and sevens. The match eventually went into a super over after the two teams finished on a tie.

Saini put his hand up again and bowled a brilliant super over, conceding just 6 runs. RCB chased it down to come out tops, leaving the Mumbai Indians a disconsolate lot.

However, the win, achieved under extreme pressure, will have brought little comfort to the RCB dressing room as their bowlers couldn’t close out a win even with a big total to defend.

At things stand, RCB need to post a total in excess of 200 in every game from here on in for their bowlers to come into play.

That in itself is an additional burden on their batting unit, which though bursting with potential and proven talent, hasn’t quite come together.

However, Udana, with his clever varitions of pace and Zampa, with his wicket taking ability, are options that RCB might consider persisting with in future games.

Their bowling is clearly a work in progress and Adam Griffith might already be contemplating going into the huddle with the bowling unit in the wake of another listless display against MI.