MS Dhoni’s last two matches in IPL 2020 seem to indicate that his finishing days are well past him and he must move up the order as an accumulator and anchor of the innings. 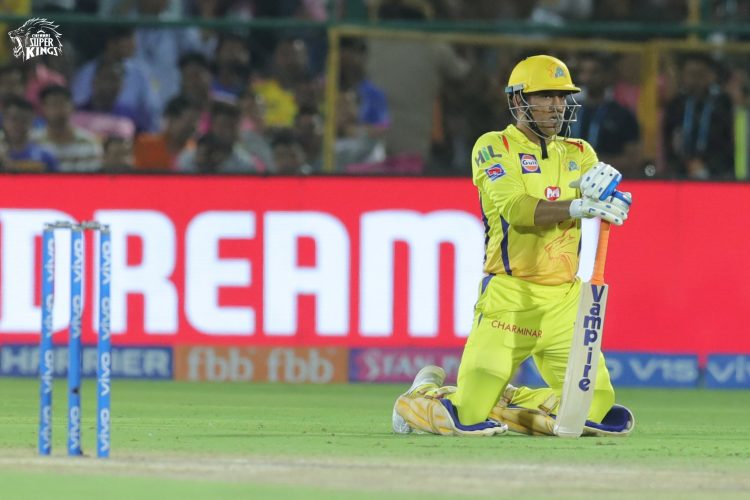 Dhoni needs to make up his mind and play more number of balls to ensure they look threatening in IPL 2020 (Credits: Twitter| Chennai Super Kings)

Before the start of the Delhi Capitals game in IPL 2020 in Dubai, Chennai Super Kings skipper MS Dhoni was asked what would be his batting position be. Dhoni replied that he would bat in any position according to the team requirements.

In the game prior to this against Rajasthan Royals, MS Dhoni batted at No.7 in the chase of 217 when he should have batted higher the order. Against Delhi Capitals, he batted at No.6 but could not score much.

What has the two games against Rajasthan Royals and Delhi Capitals shown?

The batting order of Chennai Super Kings is simply not right. Yes, promoting Sam Curran and Ravindra Jadeja ahead was a good thing against Mumbai Indians.

But, at that time, the target and run-rate were slightly more manageable.

Against Rajasthan Royals, with the asking rate of close to 20, it was a bridge too far. Even against Delhi Capitals, with the required rate over 15, it became a tall task.

Everybody is expecting MS Dhoni to be the finisher par excellence.

For him, any target is within his zone. His blueprint of batting in the last decade has been simple. Bat out and get the match deep into the last over or even the last ball.

In the middle, just explode towards the death. This worked for MS Dhoni during the first half of the decade, now not anymore.

Bowlers now will bowl the back of a length angled in delivery at Dhoni’s body. They will not give him width neither will they bowl it too full. If it is full, they may want to try the wide yorker but they risk overpitching it.

The era where they would bowl full to Dhoni has long gone. On the slow, low and sluggish pitches of the UAE, this is the blueprint for bowlers to succeed against Dhoni.

If bowlers have worked him out, then Dhoni can still surprise them.

With three matches in his kitty, it would not be a bad idea for Dhoni to get himself promoted to No.4. Fans and Chennai Super Kings team management must realise that Dhoni is now better suited to be the accumulator rather than the finisher.

When he has gotten his eye in, by  the 16th or the 17th over, Dhoni absolutely goes for the kill with his eye in and with his presence already established at the crease.

The likes of Sam Curran and Ravindra Jadeja can be the finisher and that can boost Chennai Super Kings.

It is not like MS Dhoni does not have success at No.4. He won us the 2011 World Cup from that position.

Several other memorable knocks of Dhoni have come from that position. If he can try that out in the IPL, it will help Chennai Super Kings revive themselves.

However, they will be greatly helped by Dhoni’s promotion. As we have seen in the last six years, Dhoni’s finishing has been unfortunately more miss than hit. It is about time Dhoni finishes his finisher role and becomes an accumulator.