IPL 2020: Why speedsters are hogging bowling honours this IPL?

Quick bowlers have made a killing on the virgin strips in the Emirates as eight of the top ten wicket-takers this season are pacemen. 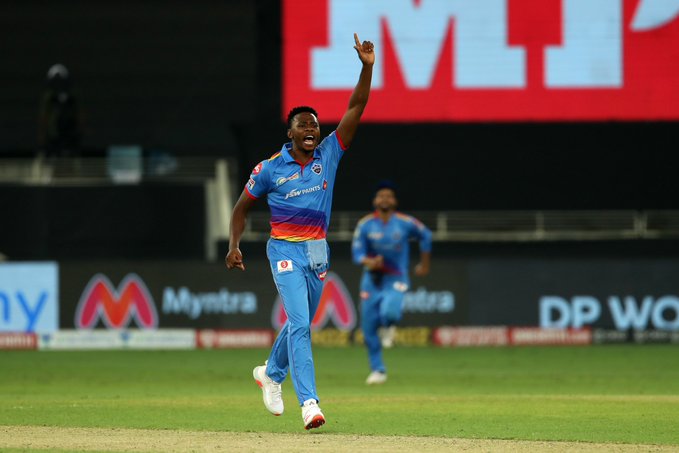 Rabada has been among wickets in IPL 2020 (Credits: Twitter | Delhi Capitals)

Is it any surprise seeing speed merchants dominating the bowling charts 23 matches into IPL 2020? If one purely goes by the history of cricket in the Emirates, it’s fairly well documented that the surfaces in this part of the world have favoured the slower bowlers through the decades. Spinners have tended to have a ball on the traditionally slow surfaces here, foxing batters by dipping into their magic bags and pulling out a trick or two. This IPL season, however, the 22-yards on these desert lands haven’t played true to self. Reason? Off-season cricket and virgin strips.

With the novel coronavirus pandemic putting paid to hopes of hosting Indian cricket’s biggest showpiece event back home, the IPL bandwagon, this year, rolled into the Emirates. However, with summer not the ideal time to be hosting cricket in this part of the world, the surfaces here were draped in the colour of envy ahead of the tournament, and, as widely speculated, have largely played close to the bouncy and seaming strips in England and Australia. Secondly, the pitches barely had any cricket on them going into the IPL and hence the freshness and the ‘tinge of green’ as Kolkata Knight Riders head coach Brendon McCullum said ahead of the tournament kick-off.

However, to say that the pitches, so far, have favoured only the quick bowlers is not an entirely accurate assessment either. While the opening overs, especially under the lights, have seen appreciable movement in the air and off the surface, the spinners have come into their own mid-innings finding significant success.

The list of top wicket-takers this IPL season offers a fair reflection of how the surfaces have played so far. While there’s no saying whether the trend will hold deeper into the tournament, the top three positions in the bowling chart is currently occupied by speedsters Kagiso Rabada, Jasprit Bumrah and Trent Boult. In more affirmation of how much the surfaces have assisted the speedsters, eight of the top ten wicket takers this season are pacemen.

While the South Africa speedster had set a hot pace this season, leading the bowling charts with 17 wickets, ‘Boom Boom’  Bumrah has also hit top stride after a slow start for Mumbai Indians and currently sits second with 11 wickets to his name. His dugout mate and Kiwi opening bowler Boult is third with 11 scalps.

Apart from topping the wickets tally, Rabada, who is spearheading the Delhi Capitals attack this season, has been hard to score off as well with his fiery opening bursts and skilled death bowling. While 17 wickets from seven matches has made him the undisputed holder of the ‘Purple Cap’ (presented to the top wicket-taker in the tournament), he has set the bar high with an economy rate of 7.69. Operating on an immaculate line and length and consistently hitting speeds close to 150kmph, the Protea hasn’t let batters off the leash. He is clearly one of the reasons why the Delhi Capitals, with five wins from seven games, find themselves in the second place on the League points table at the half-way stage of the tournament and is being touted as a top title contender.

Away from top-level cricket during the lockdown phase, Bumrah looked short of a gallop in the initial stages of the tournament but has since found his bearings and radar, moving steadily up the bowling charts. A death-overs specialist, Bumrah struggled to land his toe-crushers in the first few games, with many ending up as knee-high full tosses and creamed to the fence. However, he is back to his mean and metronomic best and produced 4/20 in the win over Rajasthan Royals, his best bowling effort this season. While his overall economy rate with the ball this season is 7.58, he has been particularly effective in containing the run flow in the last few games.

Boult has also been a revelation for the Mumbai franchise this season, denting rival line-ups with early strikes and making life difficult for batters with prodigious seam and swing. Making skilled use of the moisture on the surfaces under lights, the Kiwi left-arm quick has proved to be an ideal strike partner for Bumrah. For someone who has to pitch the ball up for it to nip away or tail in sharply, Boult has been fairly miserly this season, going at an economy of 8.01 runs per over, which is less than his career rate of 8.64 in IPL cricket.

Also among the wickets this season is Mohammad Shami. Leading the bowling armoury of the Kings XI Punjab this season, the fast bowler has breached the stoutest of defences with sheer pace and skill. He has also been up around the rib cage of batters, not giving them any scope to open their shoulders and hit him to the square boundaries. He also figures on the bowling charts this season with 10 wickets from 7 matches. However, his lethal opening bursts have, at times, been undone by profligacy in later spells. While going off radar on occasions, he has operated at a fair economy rate of 8.36 and has clearly been the best bowler for his franchise along with leggie Ravi Bishnoi.

The likes of Pat Cummins, Kamlesh Nagarkoti, Prasidh Krishna, Shivam Mavi, Anrich Nortje and Navdeep Saini have also found the surfaces to their liking, especially under lights. All have tended to operate on a tight line at express speed and have also got batters at sixes and sevens with searing lifters. The dreaded pace pair from the 2018 Under-19 World Cup, Mavi and Nagarkoti have brought their X-factors into IPL cricket picking up 5 and 4 wickets respectively.

While the surfaces have proved to be happy hunting grounds for the quick men, the spinners, across franchises, have also claimed a fair share of the bowling honours. Afghan spin wizard Rashid Khan, who plies his IPL trade for Sunrisers Hyderabad, sits fourth on the list of top wicket-takers this season with 10 scalps from 8 matches. His spin mate Yuzvendra Chahal, who has been a star performer for Royal Challengers Bangalore, trails him at 5 with 10 wickets from 7 matches. Spinning a web around batters, Khan has bowled at a fabulous economy rate of 5.34. The highest wicket-taker for RCB this season, Chahal has produced enviable bowling numbers match after match, stifling batters with his repertoire.

Unlike most seasons, the IPL, this year has had plenty to offer to both bowlers and batters and one hopes the balance doesn’t shift either way.